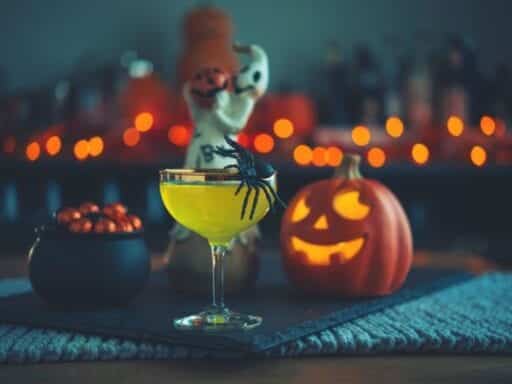 Halloween is an aesthetic, not a flavor.

It is a very spooky time. In the lead up to Halloween, food brands are racing to capture the ghostly spirit of the holiday in edible form. M&M’s, for example, returned once again with a white chocolate candy corn M&M. Burger King, a longtime leader in the Halloween burger space, keeps unveiling different spooky buns.

There is just one problem: Halloween is not a flavor. A flavor implies uniformity. A flavor is consistent across use-cases. You can have vanilla ice cream or vanilla cake or vanilla creamer in your coffee, and there is a consistent thread, which is vanilla. But while Halloween inspires many different brands to attempt to capture its essence, no one can quite agree what that essence tastes like.

At select Starbucks stores, you can now order something called “Witch’s Brew,” which is a Frappucino, but much spookier. The press release explains:

The charming concoction starts with a purple blend of “toad’s breath” and orange crème Frappuccino and a swirl of green “bat warts” (made with chia seeds). A topping of vanilla whipped cream and dusting of green “lizard scale” powder finishes the beverage.

In the interest of experiential journalism, I paid $5.72 for a “brew” of my own.

“I’ve never rung one of these up before!” the barista told me when I ordered. This makes sense, because they are not very good, though they are, as promised, very purple.

“I feel like I don’t usually eat things this color,” a colleague said when I brought it back to the office. “Because I imagine they’d taste like this.”

Witch’s Brew is very, very sweet, like melted lifesavers would be sweet, were you to drink them, which you would not. The “bat wart” chia seeds are certainly an innovation, much like the Microsoft Zune was an innovation. The whipped cream was fine.

This is not Starbuck’s first entry into the Halloween frappucino category, of course. Let us never forget the Frappula Frappucino (2015, 2016) and the Zombie Frappuccino (2017).

The former, a vampire-inspired beverage — Frappula like Dracula, see?— was a blended mocha sauce-milk-ice combo, topped with a “drizzle of strawberry puree,” which looks like blood, in that blood is also red. The net effect was meant to evoke classic horror, but also had the advantage of looking like a sundae, which is to say: a much-loved food with a long history of already existing.

It was not until the Zombie Frappucino of 2017 that we were ushered into the age of the truly vile. Described by Starbucks PR as “a little ghastly,” the Zombie base was “infused with flavors of tart apple and caramel.” Like both tart apples and zombies, it was green, and topped with pink whipped cream. This is because pink is the color of brains.

Starbucks, of course, is not the only brand out for thrills. This year, Burger King had not one but two heavily publicized spooky offerings: a “Scary Black Cherry” slushy, and a “Nightmare King” burger, so-called because the unsettling green bun was “clinically proven” to induce nightmares.

At least two breweries are offering a candy corn-flavored beer. “It tastes a little marshmallow-y,” Deb Lock, co-owner at Urban Growler Brewing Company in St. Paul told the Minneapolis Star-Tribune. “It tastes way better in beer than it does on its own.” At Applebee’s, the dollar-cocktail of the month is a $1 “rum drink” with a “gummy brain for garnish.” It is tropical-fruit flavored, but also electric blue.

Based on all of these purportedly Halloween-themed products, the flavor of the holiday is: orange crème with chia seeds; tart apple and caramel; the color green; candy corn; “scary black cherry”; tropical fruit; the color blue. Which is to say: it does not have one.

This is partly owing to the fact that the “taste” of Halloween is the taste of candy. All candy. Excess candy. Chocolate candy, and nougat-based candy, and lollipops and discs of compressed colored sugar. Some of the candy is stuffed with peanut butter. Some of it is stuffed with flakes of coconut. Some of it has been in someone’s basement since 1993. The unifying theme is: sugar, in excess. But sugar, in excess, can taste like many things.

Other occasions taste like one thing, or maybe two. Three at most. Pumpkin spice, for better or worse, is autumnal; Christmas, or the more inclusive “Holidays” (which is Christmas), is peppermint and ginger. Peppermint is a flavor. Ginger is a flavor. We have, in America, decided that these flavors are associated with certain times of year, during which you can experience them in myriad ways, including, but not limited to, drinks at Starbucks.

Halloween, though, is an aesthetic. And it is not an aesthetic that particularly lends itself to food. The theme of Halloween is “spooky,” “unsettling,” “supernatural,” and “associated with the dead,” none of which necessarily suggest inherent cravability. Who among us has a hankering for a latte with just a little hint of the undead?

So we are stuck with colors: green and blue and purple and black, all meant to evoke otherworldly rot, but without actually being rotten. Even candy corn is not a flavor; candy corn is a food. It is a controversial food, but it exists, in discrete, caloric kernels.

The result is a weird menagerie of food objects that taste like one thing (fruit, usually) but look, in most cases, like an unnatural experiment in food science. If they invoke pleasure, it is in most cases visual, not gustatory. The main story to emerge from Burger King’s scary cherry offering is that it turns one’s excrement exciting colors. (Is this pleasure? I cannot tell you.) The delight is not in eating the object, but in the fact that it exists.

I am not here to rob anyone of that joy. There is very little joy in the world; if a Nightmare King brings anyone joy, may they have several. Halloween stunt foods are something to look forward to, a momentary flicker of delight breaking up the relentless monotony of the forward march of time. And that is fine. Perhaps that is even a public service; perhaps it is a corporate gift, to dull the pain of our collective existence. I don’t want to take that away from any of us.

But Halloween is not a flavor.

Mike Pompeo is the Trump administration’s ultimate survivor
When coronavirus is behind us, will you still think of restaurant and bar workers?
North Carolina Democrat Cal Cunningham admitted to sending romantic extramarital texts
Trump threatens protesters with ‘vicious dogs.’ Some note they’ve seen that before.
Jeffrey Epstein wasn’t on suicide watch when he died. Officials want to know why.
Why Trump has lost his party’s support on foreign car tariffs