Stacey Abrams breaks down the politics of her Supreme Court thriller 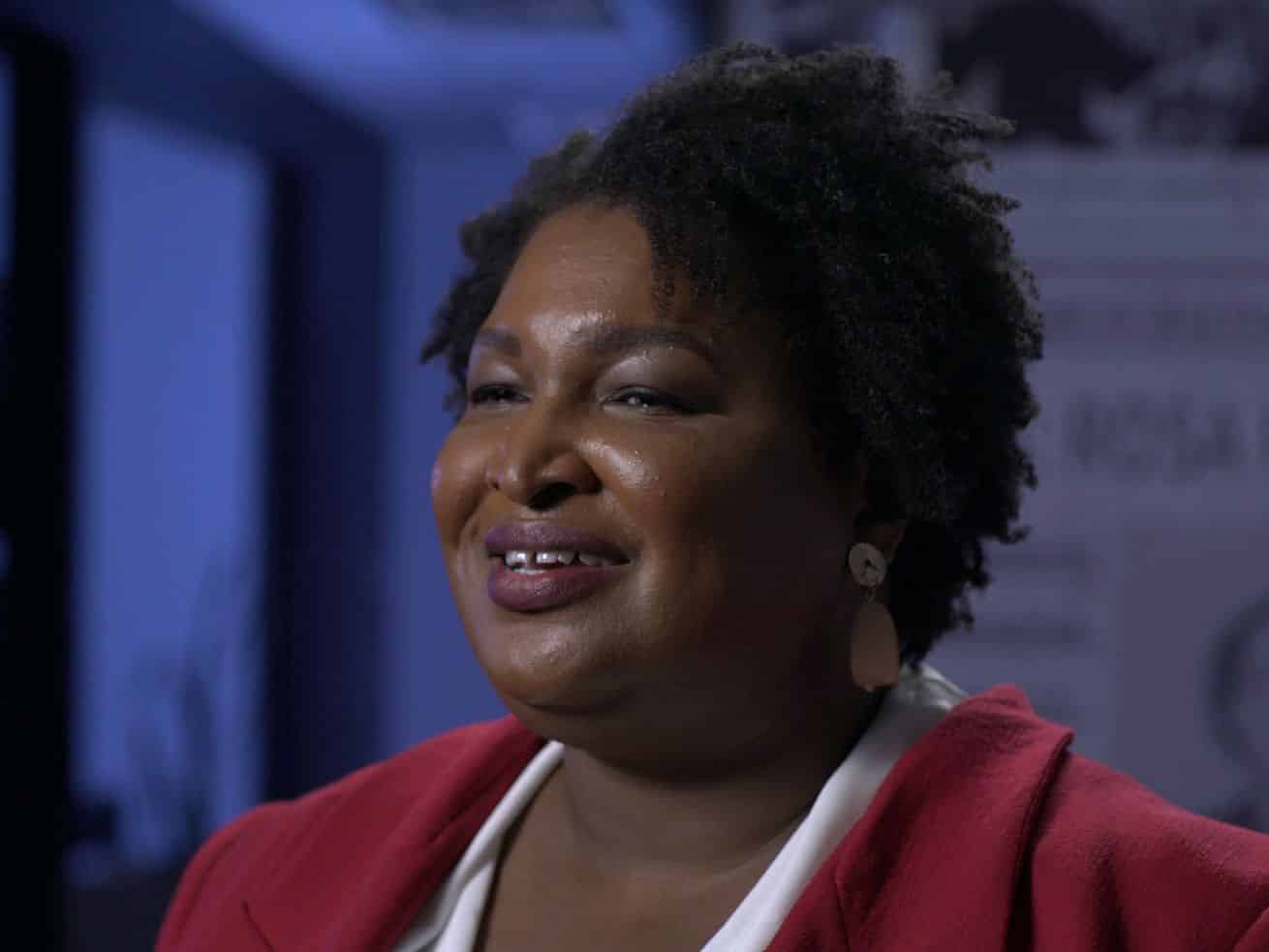 Stacey Abrams wrote a thriller. People said the president was too evil. Then came Trump.

In between organizing for voting rights and helping convince Georgia to vote blue in a presidential election for the first time since 1992, Stacey Abrams somehow found the time to write a thriller. While Justice Sleeps, out now, is Abrams’s ninth novel and first straight thriller. (Her previous eight novels, all originally published under the pen name Selena Montgomery, were romantic suspense.) She’s also written two nonfiction books. To find out how she does it all, I called her up on the phone.

While Justice Sleeps is an unusually wonky thriller. It begins when Supreme Court Justice Howard Wynn, a cranky libertarian and the court’s swing vote, falls into a coma right before the court is set to consider a case involving a pharmaceutical merger. With Howard out of commission, the court faces an existential crisis. The only way to vacate a Supreme Court justice’s seat is for them to die or retire. So what do you do if a justice isn’t dead or retired, but definitely isn’t in a position to hear cases any time soon?

To rid the country of this pesky ambiguity, shadowy forces threaten Howard’s life — including, we gradually learn, a war hero Republican president, who is drawing on his military connections to try to get Howard assassinated. The only person who can protect Howard is his law clerk Avery, who is mystified to find that shortly before falling into his coma, Howard designated her his legal guardian and granted her power of attorney. With assassins lurking around every corner, Avery slowly learns that Howard is playing a complicated chess game, one that seems to have involved seeing his coma coming. Now it’s up to her to decode his strategy.

While Justice Sleeps is a political book, and its author is one of the most interesting organizers in American politics today. So I wanted to ask Abrams about how she built the political landscape of her fictional world, and how she sees it interacting with our own world. Our conversation, lightly edited for length and clarity, is below.

You were writing under a pen name for the first part of your career. Why did you first adopt your pen name, Selena Montgomery, and when did you decide to stop using it?

I used my pen name from 2001 through 2009, which is the last time I wrote romantic suspense. The pen name was truly born of my dual obligations in writing. I was writing romantic suspense, and I was also starting to publish tax treatises and social justice policy papers and op-eds. It is much easier to separate your identities than to try to explain why Alan Greenspan is writing romance.

I was always very clear that I was Selena Montgomery. I had my face on my website. My face was in every book. There was never an intent to disguise that I wrote romantic suspense. It was just a very different dynamic. This was also at the time that Google was coming into being.

But now the need to separate my identities is no longer necessary. At the time, no one really cared who Stacey Abrams was. Now it’s slightly more relevant, and I am perfectly happy for people to know all nine of my novels, including While Justice Sleeps, as well as my two nonfiction works.

I know you first worked on this book some time ago. And I read that one of the reasons you put it aside was that publishers said the president was too evil for people to believe in, and that changed after the Trump presidency. Which is so interesting to me, because the fictional president in While Justice Sleeps seems in so many ways like a Bush-era figure, especially in terms of the press focus on his military credentials and his evangelicalism. So how do you think the post-Trump landscape changes the way readers approach this character?

It was my agents that I sent the book to, because that’s the first step to getting it in front of the publisher. And each time, there was pushback. The first time I pitched it was in 2010, 2011, so it was in the midst of the Obama era, and I think part of what the pushback was, was really around the president character’s involvement in international intrigue. Although to your point, this was not anathema to who American politicians had been before.

I think what happened this time is that the very clear and slightly caricatured behavior of Trump, as someone who openly courted international interference, who openly courted and rebuked our political norms, made my character, by comparison, seem a lot less far-fetched.

And then there’s the figure of Justice Wynn, who’s in kind of a tricky place, right? Because he has to be the crucial swing vote on the Supreme Court for the plot to work, but he also has to have a really clear, stringent moral code. So how did you develop the politics for this fictional character?

I really did study Supreme Court justices who have found themselves in positions of high influence. But I also wanted to situate that justice in the space where you had thorny moral questions, where there wasn’t a clear through-line of where people would fit. And I wanted to make certain that the question created by this merger really implicated not only his more libertarian streaks, but also his sense of moral justice, and how those two things could intersect.

So in addition to having your female protagonist, Avery, this book also has a female chief justice on the Supreme Court. What was important to you about showing women in positions of leadership in this book?

Well, part of it was paying homage to Teresa Wynn Roseborough [a former deputy assistant attorney general during the Clinton administration and Abrams’s former colleague], whose name appears twice. The chief justice is Teresa Roseborough, and there’s also Howard Wynn. She was the catalyst for this thought for me.

But it was also important to me that that the chief justice, the person who could help Avery, that she be a strong figure, who is not in contrast to Avery’s mother, but is another example of that kind of leadership figure. And because the president was a man, I also wanted to be very clear about having that gender balance. Which unfortunately does not actually exist, but I wanted to give it more context and more possibilities.

One of the book’s most entertaining moments — and I am maybe showing my Voxiness here, because this is a thriller with a lot of gun fights and kissing — but the scene where the Senate majority leader and the House speaker discussed the possibility of court-packing was so fun for me. Was that part of your original conception of the book, or did you bring it more in after the events of 2020?

Oh no, there was actually a whole chapter! So many of those scenes had to get cut. That was rough. That was some of the most fun I had writing. But for, you know, pacing and to keep the plot moving, there were sacrifices that had to be made. I sacrificed car chases, yes, but I also had to sacrifice that longer dialogue. They had a few more scenes where they came together, and the push-pull tension in their relationship was a lot of fun for me to write. I love the politics.

Is that ever like a busman’s holiday for you? Or is this sort of wonky political intrigue always a fun thing for you to write?

I like to write both what I know and what I learn, and so in every one of my books you’ll find kernels of what I’ve already assimilated or absorbed, and then new things I’ve gotten to learn in order to make the book work. This was one of the few times I was truly and wholly in my own wheelhouse. And that was founded even there: spending time doing research about the history of court-packing. Thinking about how the law works, on the surface, but also how about regulation and how bureaucracy is this separate form of government.

That’s something we often give short shrift to, which is why Betty [a bureaucrat in While Justice Sleeps who becomes key to solving the book’s central mystery] was such an important character to me. I’ve never been at her level, but as a program analyst for the Office of Management and Budget, I was reading through reams of reports. I’m one of like 10 people who actually read all of those reports, and there’s so much I learned about how our government works because of it.

So how do you tend to approach the work you do as an author in balance with all of the important work you do in politics and organizing? How do you find the best way to keep them supporting each other?

I write because I love to tell stories, whether it’s in fiction or nonfiction. When I was running for governor, I wrote [a leadership handbook for marginalized people] Lead From the Outside. When I was launching and bringing [voting rights organization] Fair Fight to full power, I was writing [a treatise on ending voter suppression] Our Time Is Now.

I’ve written for as long as I’ve had an actual career, whether it was as a tax attorney or as an entrepreneur or as a legislator. And to me it’s about respecting both parts of me, or all the parts of me, and giving primacy, one, to what has the greatest urgency; two, to what has the most relevance.

Biden’s new North Korea policy is an extended hand to Kim Jong Un
What’s in a name? From Aunt Jemima to the Redskins, enough ugly history to demand change.
The UK Parliament just blew up Boris Johnson’s Brexit plans
Louisiana’s longest-serving incarcerated woman is supposed to be free. Instead, she has Covid-19.
Biden will pause deportations for 100 days
Trump won't stop interfering in the election - CNN