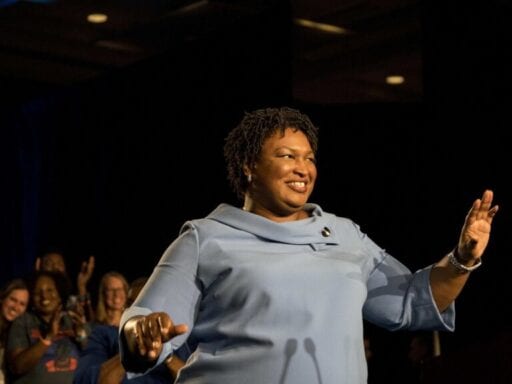 The former Georgia gubernatorial candidate took to an elite journal to make the case for identity politics. What she wrote matters.

But what does Abrams really stand for, and what does she really think? To get a sense, it’s worth reading an essay by her published last Friday defending one of the most controversial ideas in American public life: identity politics.

The piece, published by the journal Foreign Affairs, is a response to an essay by famed intellectual Francis Fukuyama. In a recent book, Fukuyama lambasted left-wing movements for dividing the country by focusing too much on appeals to race and gender; he called instead for Democrats to refocus on class to win back blue-collar Trump voters.

It’s a familiar argument, and one Abrams finds decidedly unpersuasive. She argues that identity politics is simply the assertion of historically marginalized groups’ interests and right to participate as equals in society, an inevitable and necessary feature of a society marked by social oppression. The piece marks Abrams as the rare politician willing to mount a full-throated defense of the idea of identity politics; the fact that she does so in a sharp and compelling way helps explain why the Democratic Party sees her as a rising star.

The core of Abrams’s argument is that identity politics is not something that members of marginalized groups can ignore. If they want equality, they must address the issues and social structures that oppress them.

“The marginalized did not create identity politics: Their identities have been forced on them by dominant groups, and politics is the most effective method of revolt,” Abrams writes. “What Fukuyama laments as ‘fracturing’ is in reality the result of marginalized groups finally overcoming centuries-long efforts to erase them from the American polity — activism that will strengthen democratic rule, not threaten it.”

The point here is not that it’s bad to be labeled as “black” or “female”; Abrams personally embraces both labels. Rather, it’s that the social significance assigned to being a member of an oppressed group — the mental baggage, stereotypes, and mistreatment you experience from others as a result of your identity — is not something individuals can choose to take on or reject. Your race, gender identity, sexual orientation, or religion cause you to be treated in a certain way, forcing you to be aware of your marginalized social role and identify with it whether you’d like to or not.

As a result, Abrams argues, minority groups face two choices: either ignore their own oppression or engage in some form of so-called identity politics. Asking minorities to eschew identity politics is tantamount to asking them to ignore their own oppression. How can you include black Americans in modern politics if you don’t talk about police violence and voter suppression? How can you include women without talking about the gender pay gap, or LGBTQ Americans without addressing the lack of federal anti-discrimination laws?

You can’t, at least not meaningfully. In Abrams’s view, critics like Fukuyama are functionally telling people like her to sit down and shut up.

Abrams also finds the alleged alternative, a class-focused politics, unpersuasive. She points to the Democratic party’s nationwide victories in 2018 as evidence that candidates can run on identity issues and win (although Abrams herself did not).

She also argues that positioning messages based on class and those based on identity as being in conflict is part of the problem — and results in the exclusion of minority concerns from politics. It’s worth quoting her at length here:

Fukuyama and other critics of identity politics contend that broad categories such as economic class contain multitudes and that all attention should focus on wide constructs rather than the substrates of inequality. But such arguments fail to acknowledge that some members of any particular economic class have advantages not enjoyed by others in their cohort. U.S. history abounds with examples of members of dominant groups abandoning class solidarity after concluding that opportunity is a zero-sum game. The oppressed have often aimed their impotent rage at those too low on the social scale to even attempt rebellion.

This is particularly true in the catchall category known as “the working class.” Conflict between black and white laborers stretches back to the earliest eras in U.S. history, which witnessed tensions between African slaves and European indentured servants. Racism and sexism have long tarnished the heroic story of the U.S. labor movement—defects that contributed to the rise of a segregated middle class and to persistent pay disparities between men and women, disparities exacerbated by racial differences. Indeed, the American working class has consistently relied on people of color and women to push for improved status for workers but has been slow to include them in the movement’s victories.

Instead of opposing class and identity, she concludes, an effective left-liberal politics would point out the connections between different forms of social stratification — crafting an appeal that speaks to both economic and social concerns rather than reducing one to the other.

In Abrams’s view, it’s possible to build a political movement that recognizes both the particular challenges facing distinct identity groups and, at the same, manages to appeal to all of them.

“The current demographic and social evolution toward diversity in the United States has played out alongside a trend toward greater economic and social inequality. These parallel but distinct developments are inextricably bound together,” Abrams writes. “The entrance of the marginalized into the workplace, the commons, and the body politic — achieved through litigation and legislation — spawned reactionary limits on their legal standing and restrictions meant to block their complaints and prevent remedies. The natural antidote to this condition is not a retrenchment to amorphous, universal descriptors devoid of context or nuance. Instead, Americans must thoughtfully pursue an expanded, identity-conscious politics.”

The devil is in the details when it comes to this kind of argument. It’s easy to hazily appeal to a kind of united-quilt identity politics, but much harder to create a political campaign that effectively harnesses this kind of vision.

Barack Obama was the unquestioned master of this tactic, managing to make different groups feel like their interests were being taken into account while also selling a master narrative of unity to the broader American public. But not everyone has Obama’s talents as a political communicator, to put it mildly. It remains to be seen how good Abrams will be at putting her vision into action in future campaigns, either in Georgia or nationally.

But the theory here is important in its own right. By mounting a full-throated defense of identity politics — arguably the most criticized concept in American politics today — Abrams is bolstering her reputation as a Democratic politician worth watching, attacking the conventional Washington wisdom at a high intellectual level.

It’s also notable that someone with Abrams’ level of prominence is making this kind of argument. The anti-identity politics case has become so ossified that its defenders often seem almost incapable of questioning their own premises.

In Fukuyama’s response to Abrams, he accuses her of painting white America with too broad a brush. “It is absurd to see white Americans as a uniformly privileged category, as she seems to do,” Fukuyama writes.

But nowhere in Abrams’s essay does she do that. It’s possible to recognize that the white working class has historically benefitted from certain elements of white privilege — being included in New Deal programs that blacks were initially excluded from, for example — without saying that they are “uniformly privileged.” Abrams’s attention to the nuances of identity allows for this more subtle analysis, which Fukuyama doesn’t seem to grasp.

There’s two paragraphs in particular where Fukuyama seems to give up the game. He writes:

People can walk and chew gum at the same time. Even as Americans seek to right injustices suffered by specific social groups, they need to balance their small-group identities with a more integrative identity needed to create a cohesive national democratic community.

But then later in the essay, he also writes:

In practical terms, overcoming polarization means devising a posture that will win back at least part of the white working-class vote that has shifted from the left to the right. Peeling away populist voters not driven by simple racism means taking seriously some of their concerns over cultural change and national identity.

There’s a contradiction here: Fukuyama wants minorities to talk about their issues, but only if it doesn’t offend whites concerned about “cultural change and national identity,” which he deems a less problematic form of anti-minority politics than “simple racism.” So can Latinos advocate for fewer deportations and amnesty for the undocumented, or would that tip the “balance” of acceptable topics? Can black Americans argue for affirmative action or reforming the criminal justice system? Can trans people argue for their right to use the bathroom corresponding with their gender identity, or is that too much “cultural change?”

This confused response illustrates the value of Abrams’s argument. Her focus is on the definition of identity politics, of showing how it is functionally coextensive with the idea of minorities advocating for their own interests. Critics of identity politics often get away with being frustratingly vague as to what exactly they’re attacking; the weaknesses of the argument only become manifest when you press them on the definition.

So Abrams is an unusually talented politician: One who can both give a great speech and engage thoughtfully in print with one of America’s most prominent academics. Put together, it shows just why the Democratic Party is so excited about her.