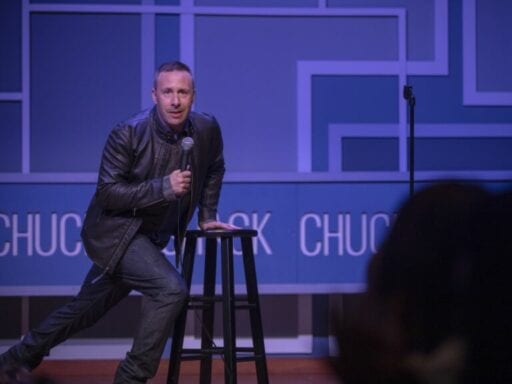 The comedy series smartly breaks down “anti-PC” comedy without getting preachy.

In the last 15 years or so, there have been a lot of comedies about comedy — shows that dig into the lonely life of the stand-up comic, or the peculiarities of the comedy club. And there have been perhaps even more essays and thinkpieces about comedy, about the way it does and doesn’t reflect changes in society.

But few TV shows have captured the very specific ways that stand-up comedy can become a sort of proxy war among the comics who share a stage than HBO’s Crashing, a vehicle for the comedian and podcast host Pete Holmes that is very, very loosely based on his real life.

Like the real Holmes, TV Pete starts out his comedy career as a recently divorced evangelical Christian who’s trying to find a middle ground between an often raunchy profession and his faith. But unlike the real Holmes, TV Pete is looking for a way to meld those two sides of himself together. In season three, in fact, his big goal is to take part in a Christian comedy tour.

But the guilelessness that comes from TV Pete’s “just trying to be a good guy” persona makes him the ideal conduit to talk about the many controversies roiling comedy right now. And perhaps no episode of Crashing has captured those controversies better than the recent “MC, Middle, Headliner,” in which Pete shares a stage with a defiantly anti-PC comedian who decries the ways the world has changed.

Crashing never tries to be a thinkpiece. Instead, it tries to humanize everybody in it, as best as it can.

What makes “MC, Middle, Headliner” work is how it never directly demonizes the anti-PC Jason (Dov Davidoff) as an uncouth loudmouth, but it also doesn’t celebrate him as a bold truth-teller being held back by a repressive culture. He’s just a guy trying to do his job, while discovering that the sort of ironically racist and sexist material that might have killed for him in the ‘90s — his act starts with a riff on how sometimes stereotypes are based in reality, and it’s time we all just admitted it!!! — now draws angry Yelp reviews and pushback from the younger comics he shares sets with.

The episode doesn’t give Jason a big moment of realization, however; he starts it a petty tyrant, and he ends it a petty tyrant who’s been ever so slightly diminished by what transpires. He’s still a guy who turns up his loud thrash metal music when Pete turns it down on the drive home, a guy who would never give an inch but actively looks for miles he can take from other people.

He’s an asshole, in other words, but an asshole whose behavior is grounded in the episode’s deep knowledge that he’s been working the comedy circuit for 22 years and hasn’t yet risen beyond the level of performing at corporate comedy clubs in high-rise malls. He might be headlining this show, on this weekend, but both his “middle” (Pete) and his MC (Pete’s ex Ali, played by Jamie Lee) have bright careers ahead of them. It’s hard to say what Jason has ahead of him beyond many more years of this specific slog.

Jason presents an interesting contrast, then, to Pete, who is trying to chart his own path, and to Ali — who might be the MC for this particular show, where she’s asked to explain drink specials to the audience and only has 10 minutes to perform her set and make a list of announcements, but who’s also booked a gig on Seth Meyers’ late-night show, something that might elevate her career to a level above either Jason or Pete.

What’s more, when we get to see little snippets of Jason’s set, we can see why people would think he’s hilarious. He’s got skills, and his jokes are well-paced and solidly crafted. Few shows on TV are as good at explaining why certain comics take off when others don’t as Crashing, which is just as interested in the construction of an individual set or an entire joke as it is in whether the joke is funny. The implication is always that a funny premise can lead to a funny joke, but you have to try stuff out, you have to try to find a way to make things work.

Jason is someone who’s honed all of this stuff to a sharp point, but he’s also someone whose best days are behind him, and he knows it. This makes him even more bitter than he might otherwise be — and more prone to, for instance, raging at Ali and Pete for how they don’t want to go out and have a wild night in the suburbs after their set. (She’s drinking tea. Pete is talking to his girlfriend back home.) Still, he’s humanized enough that you might be inclined to extend him just a little sympathy when he loses his role as headliner (to Pete) because his anti-PC set offended enough people that they dropped the club’s Yelp score a half star in a single day.

But “MC, Middle, Headliner” never once loses sight of the fact that Jason is an asshole. You can make excuses as long as you want for his behavior, but he’s still the guy who keeps turning up the music, or who makes a pass at a waitress long after she’s made it clear she wants nothing to do with him. He’s not a good guy, nor a brave truth-teller. He’s sad, warped, and frustrated.

In the hands of Davidoff and the show, Jason’s origin story is immediately clear. He came up in the ‘90s, trying to ride the wave of ironic racism and sexism that so many other comics benefited from at that time. But he was never as good at it as a Sarah Silverman, someone who could always twist the joke so the butt of it was her. Instead, he believed that simply pushing hot buttons was what made for funny comedy.

That got him quite a ways. He’s a headliner, after all! But at a certain point, he reached his ceiling, which translates to mostly amusing audiences at comedy clubs in weird, anodyne malls. (My favorite shot of “MC, Middle, Headliner” comes when Pete, Jason, and Ali go to the mall one day and become tiny figures at one table in a vast, mostly empty food court. This mall — like Jason’s way of life — is dying.) And as other, younger comics rocket past him, comics whom he can’t see as funny because he can’t see past their race, their gender identity, or their sexuality, he grows more and more embittered.

Crashing has always argued that anything can be funny if you do the work to make it so. Jason’s essential premise — maybe there’s some truth to stereotypes — could perhaps make for a great set if he put in the work of figuring out better material, or if he found a way to give that premise an ironic spin, or literally anything but what he does. And yet people still laugh at him because his jokes have some polish to them and because his frustration at the idea that other people can get laughs more easily than he can in 2019 mirrors the frustration that plenty of other white men feel in a world that’s become ever so marginally more inconvenient for them. (Like… one one-thousandth of a percent more inconvenient, but still.)

Crashing is always trying to understand comedy, where it comes from, and what makes some of it good and some of it bad. And in “MC, Middle, Headliner,” the show sees Jason not just as a window into this particular style of comedy but into a whole worldview. It doesn’t let him get away with anything, and when he’s ranting about how hard white guys have it nowadays, it lets Ali push back against his nonsense. But it also never forces Jason to learn a lesson, and it never urges everybody forgive him for being an asshole. It simply sits back and observes.

And serving as a conduit for that kind of quiet, passive observation is Pete’s primary role on Crashing. Sure, we’re invested in his love life (or at least I am, since I deeply hope he and Ali get back together someday) and in his career. But he’s also a character whose very bland exterior — he might be the ultimate in safe-looking white dudes — and “first do no harm” personal philosophy makes him a quiet example of what a white guy comic can be in 2019: someone who keeps his head down, works on his material, tries like hell to be funny, then steps back and listens when people who don’t like him share their stories.

And then, later, in the car, he’ll assert his desires as quietly as possible, by turning down the radio, right before some asshole relic from another era turns it right back up.