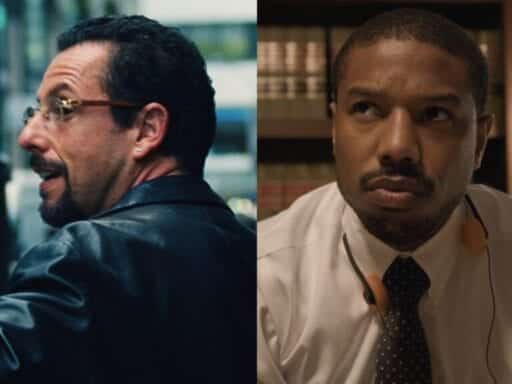 Adam Sandler, Charlize Theron, and Michael B. Jordan will all be on the big screen this month.

The end of the year typically brings the last batch of prestige movie releases hoping for awards-season recognition, as well as a collection of family-friendly movies designed for holiday viewing. This December is no different: Audiences can see a creepy horror film, a dark comedy about sexual harassment at Fox News, a big-screen version of one of the most popular musicals of all time, masterpieces from several living legends, and the much-anticipated conclusion of the third Star Wars trilogy.

Here are 12 movies to watch for in December.

It’s a little hard to know what to make of Little Joe, a stylized horror sci-fi drama from director Jessica Hausner, who drew on Frankenstein as inspiration. Emily Beecham (who won Best Actress at Cannes for her performance) and Ben Whishaw star in a story about scientists endeavoring to create a houseplant that makes its owner happy whenever they smell it. The plant, the scientists say, will help cure depression and anxiety around the world. But then things go … sideways.

The film contains some chin-scratching implications about mental illness (I’d have to spoil the plot to explain, but suffice to say it gave me pause). With those connotations aside, however, Little Joe is a great horror film: slow-moving, filled with dread, set in a pastel landscape that makes the fiery red flowers of the scientists’ new houseplant all the more creepy.

Noah Baumbach is America’s foremost chronicler of rough-hewn and disintegrating family units. In Marriage Story, he pries open one divorce to find the beating heart inside. The film sees the end of a marriage as cause for both mourning and bittersweet comedy: A relationship is changing, but not ending. And its evolution is something to behold.

Marriage Story is a showcase for stars Adam Driver and Scarlett Johansson as much as it is a triumph for Baumbach, recalling the wry humor and perfect pitch of Woody Allen’s best work, albeit with a touch less self-obsession (even though the couple seems at least partly and probably inevitably modeled on Baumbach’s divorce from Jennifer Jason Leigh in 2013). Getting a story like this right requires a sense of the comical and the absurd along with the devastating — and Baumbach delivers.

Set during World War II and based on a true story, A Hidden Life — the latest film from Terrence Malick (The Tree of Life, Badlands, Days of Heaven) — is about Franz Jägerstätter, an Austrian farmer who could have lived a prosperous life if he’d agreed to swear an oath of loyalty to Hitler. But he refused.

A Hidden Life is Malick’s most overtly political film and one of his most religious, urgent, and sometimes even unsettling because of what it says — to everyone, but specifically to Christians in places where they’re the majority — about the warp and weft of courage. It also seems designed to lodge barbs in a comfortable audience during an era of rising white nationalism.

Adam Sandler turns in the performance of his career in Uncut Gems, an exhilarating feature-length panic attack. Sandler plays Howard Ratner, a jewelry dealer in New York’s Diamond District who’s always on the hunt for the next big deal, and whose latest scrape has stakes that could ruin him. It’s a thoroughly fun thrill ride, a perfect study of a man who’s both an eternal optimist and an irrepressible screw-up.

Directed by brothers Josh and Benny Safdie, who drew on stories they heard from their father to make the film, Uncut Gems boasts the same heart-pounding intensity of their 2017 film Good Time, but with a bit more polish and panache. You can’t help but root for Howard — while wanting to grab him by the throat and shake some sense into him — and for the Safdies, whose command of their craft is pure pleasure to watch.

Bombshell is a movie about the women who accused Fox News founder Roger Ailes of sexual harassment and led, eventually, to his professional demise. The movie stars Charlize Theron as Megyn Kelly, Nicole Kidman as Gretchen Carlson, and Margot Robbie who plays a fictional producer, tracing the women’s experiences as they slowly come to realize that the way they and other women are being treated at the network shouldn’t be ignored.

It’s a great story, but Bombshell unfortunately feels like it misses its own point; Ailes was ousted from Fox News, sure, but that event was hardly the rah-rah tale of female empowerment that Bombshell makes it out to be. What’s more, the film neglects to examine the underlying causes of misogyny and the attitudes that lead to a culture of harassment, and its attempts at satire fall flat. But Theron, Kidman, and Robbie, along with a star-studded supporting cast (including John Lithgow, Kate McKinnon, Connie Britton, Mark Duplass, Rob Delaney, Allison Janney, and more), give fine performances — particularly Theron, who completely disappears into the character of Kelly.

The Two Popes (On Netflix December 20)

Fernando Meirelles (City of God) directs this biographical comedic drama about Pope Benedict XVI (Anthony Hopkins) and his successor: Cardinal Bergoglio (Jonathan Pryce), the eventual (and current) Pope Francis. The movie takes place mostly in 2012, at a turning point in the history of the Roman Catholic Church, as Bergoglio requests permission from Benedict to retire from the church, with which he’s become frustrated.

The result is a surprisingly sensitive and often funny take on the promise and perils of leadership, but The Two Popes also operates as an introduction to an early conflict in the life of Pope Francis and how it shaped him. It’s not afraid to pose hard questions to its characters about abuse in the church as well as belief and doubt.

Andrew Lloyd Webber’s famous musical is getting the big-screen treatment, directed by Tom Hooper, who also directed the 2012 film adaptation of Les Misérables that won Anne Hathaway a Best Supporting Actress Oscar. The first trailer raised a lot of questions — chief among them whether the movie will be any good — and the second trailer didn’t inspire much confidence.

But the intrigue of a bizarre musical tale about sexy humanoid cats remains high, and the film’s cast is absurdly stacked, featuring Jennifer Hudson, Taylor Swift, James Corden, Ian McKellen, Laurie Davidson, Idris Elba, Judi Dench, Rebel Wilson, and more. Plenty of curious observers, as well as the audiences that swarmed to the Broadway and West End productions of Cats, making them among the longest-running stage shows in history, are likely to show up for this version over the holidays, too.

As The Rise of Skywalker arrives to cap off the third Star Wars trilogy, some big questions still linger — including what more we might learn about Rey’s parentage, and what will ultimately become of the Jedi order.

J.J. Abrams returns to direct a cast that once again includes Rey (Daisy Ridley), Finn (John Boyega), Poe Dameron (Oscar Isaac), and, thanks to unused footage from The Force Awakens, Commander Leia Organa (Carrie Fisher, who died at the end of 2016). Though details are scarce, the final trailer suggests that some time has passed in the Star Wars universe since 2017’s The Last Jedi. And an earlier trailer teased a “Dark Rey” — so anything seems possible.

Sam Mendes (American Beauty, Revolutionary Road, Skyfall) directs this historical drama based partly on stories his grandfather told him about World War I. The plot is relatively simple: Two British soldiers are sent on an impossible mission to warn a battalion of an impending ambush. Through trenches and peril, in the line of fire and in bombed-out cities, they are caught in the crossfire of a war that’s much bigger than them, and one where ordinary acts of heroism can go unnoticed.

1917’s cast includes Mark Strong, Andrew Scott, Richard Madden, Colin Firth, and Benedict Cumberbatch, and features rising stars George MacKay and Dean-Charles Chapman. And the movie is edited (by the legendary cinematographer Roger Deakins) to look as if it was all filmed in one shot, which adds intensity to the action.

Based on Equal Justice Initiative founder Bryan Stevenson’s bestselling 2014 memoir, Just Mercy is the story of Stevenson’s work on the case of Walter McMillan, a man imprisoned for a murder he may not have committed. It is a plainly infuriating story, and Just Mercy doesn’t try to disguise its most angering aspects: the racism and bias against the poor that led to McMillian’s conviction; the twisting of the pursuit of justice into the pursuit of reputation; the ways the powerful protect their own.

And the film is smartly designed to deliver its message into as many hearts as possible. Directed and co-written by Destin Daniel Cretton (Short Term 12, The Glass Castle, and Marvel’s upcoming Eternals), Just Mercy stars a bevy of actors who get audiences in the door, led by Michael B. Jordan as Stevenson, Jamie Foxx as McMillan, and Brie Larson as Eva Ansley, who worked with Stevenson on the case. Foxx’s performance, in particular, seems like a solid bet for an Oscar nod.

Greta Gerwig decided to follow up her beautiful, heartfelt 2017 comedy Lady Bird with an adaptation of Little Women that boasts an inspired cast: Saoirse Ronan, Timothée Chalamet, Florence Pugh, Emma Watson, Eliza Scanlen, Meryl Streep, Laura Dern, Bob Odenkirk, Louis Garrel, Tracy Letts, and many more. It is every bit as funny and loving and heart-wrenching as Little Women has always been, throughout its many adaptations.

But for those who’ve loved the story for years, it packs a twist, interrogating the source material without disrespecting it, and thinking about what Louisa May Alcott wrote from the distance of more than 150 years. It’s not revisionist; instead, it functions like the best works of criticism, thinking about the circumstances in which a woman like Alcott would write a book like Little Women, and the world in which she lived. It’s deft, lovely, and altogether wonderful.

Bernadine Williams (Alfre Woodard) has worked as a warden at a maximum-security prison for years, and it’s clearly been wearing on her health, her marriage, and her soul. She sees her work as important — caring for the inmates and quietly supporting them as their execution dates approach.

But then a lethal injection goes awry, and as the date for the next one approaches, she finds herself at a breaking point. Director Chinonye Chukwu finds an unusual way to expose the injustices of the capital punishment system without forgetting the individuals who are stuck in its gears. And it’s a stunning performance from Woodard, who plays a woman caught between the demands of her work and the demands of her soul.