Star Wars: The Rise of Skywalker was designed to be the opposite of The Last Jedi 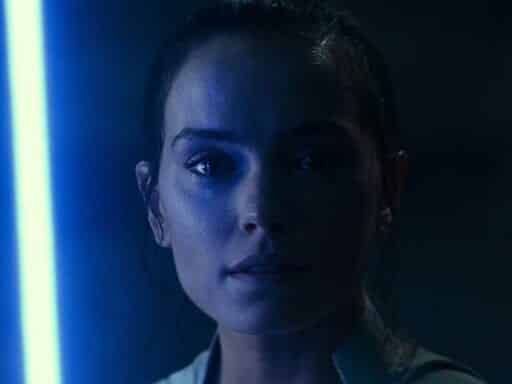 J.J. Abrams heard toxic fans’ complaints. And now he’s trying to distance himself from them — and Rian Johnson.

When it comes to marketing and promotion, The Rise of Skywalker might not seem like it had to work too hard. It’s the last movie in the current, blockbuster Star Wars trilogy, which began in 2015 with The Force Awakens. It’s the ninth and final movie in the Skywalker saga, which began in 1977 with A New Hope. It also marks the return of director J.J. Abrams at the helm, who can be almost clinical when it comes to giving fans great action-adventure movies; prior to Star Wars, he remade Star Trek into a bonafide blockbuster franchise. And that tends to mean that, when it comes to making a big-budget film, he’s dependable.

Perhaps it’s because of his corporate dependability that Abrams made sure to distance his Star Wars film from that of Rian Johnson, director of 2017’s controversial sequel The Last Jedi, during a big feature spread with the New York Times.

The Last Jedi, Abrams said, was “a story that I think needed a pendulum swing in one direction in order to swing in the other” — a deviation from the primary plot that he set up with The Force Awakens, which was very much in keeping with the beloved original trilogy of films. So much so, in fact, that The Force Awakens was often considered to be a “remake” of the very first Star Wars film, following similar story beats of a hero awakening to their mystical powers.

Abrams told the Times that he questioned The Last Jedi’s turn away from the straightforward Star Wars narrative, to instead be “full of surprises and subversion and all sorts of bold choices.” It was “a bit of a meta approach to the story,” Abrams said. “I don’t think that people go to Star Wars to be told, ‘This doesn’t matter.’”

Even John Boyega and Daisy Ridley, two of the central stars of the trilogy, joined the side of the Last Jedi haters in that same Times interview. Their reactions to Abrams’s return, as they described, were dramatically grateful.

But when it was announced that Abrams was indeed returning, his actors breathed sighs of relief. “I cried,” Ridley said, explaining that the director brought a comforting sense of structure and security. Boyega said he was glad that Abrams would get to finish the tale he’d begun in Episode VII. “Even as a normal person in the audience, I wanted to see where that story was going,” Boyega said.

In short: The Last Jedi, according to Abrams and two of the movie’s stars, failed Star Wars’ biggest fans.

Abrams’s open criticism of The Last Jedi makes for a strange contrast to our general expectations of what media-trained celebrities say on press tours. The rule of thumb always seems to be: Don’t be negative toward your bosses or your predecessors or anyone else.

Even when some films curdle into critically sour messes (see: Suicide Squad) or directors leave a project (see: Ant-Man), the public statements from those involved remain polite and unspecific. But while Abrams’s dismissal of The Last Jedi may come off as peculiar, it also seems like a calibrated wink and nod to Star Wars’ fandom — in particular a toxic swath that loves nothing more than to hate on Johnson and The Last Jedi.

The amount of criticism Rian Johnson received following The Last Jedi when it came out in 2017 was eye-opening. Critics loved the movie; it earned a 91 percent rating on Rotten Tomatoes and an 85 score on Metacritic. But it faced a backlash from hardcore Star Wars lovers.

A common scenario when it comes to blockbusters is when a movie gets panned critically but is loved by fans; Warner Bros.’ Batman v. Superman: Dawn of Justice is a good example of this. When this happens, fans will claim that critics will never understand movies the way “true” fans do. (Some even resort to conspiracy theories that critics are somehow paid off.) But The Last Jedi was unique; its backlash represented a seemingly rare occurrence in which critics love a blockbuster more than its fans.

These particular fans railed against the movie for a plethora of reasons. Among them were how progressive the movie was perceived to be, and how its plot deviated from traditional Star Wars stories and fan theories. These fans voiced their disappointment in how The Last Jedi featured women protagonists, how it disregarded fan theories about the events taking place after The Return of the Jedi (like the broken state of Han Solo and Leia’s marriage and Luke Skywalker’s Jedi academy), and how it didn’t grant importance to long-running characters, like the villainous Emperor Snoke.

The outrage manifested itself in both absurd and particularly ghoulish ways. On Rotten Tomatoes, The Last Jedi received hundreds of thousands of negative reviews from users, bemoaning how the movie ruined the franchise because it disrupted everything they thought they knew about Star Wars. These fans attacked the movie and Johnson on social media and in their reviews.

And Kelly Marie Tran, the first Asian actress to helm a major starring role in the Star Wars series, received the worst of the hatred, facing racist harassment and abuse on Twitter just because of her small part. Tran deleted her Instagram in 2018 after the harassment.

Offended fans continue to hold resentment toward The Last Jedi and Johnson in particular, asserting that Johnson ruined the entire trilogy with one movie.

hated everything Rian Johnson turned the new trilogy into, then I think you’ll love how JJ Abrams tried to correct the mess he had to work with. Far less SJW crap. Just a fun story that moved all the way through with purpose. You can almost cut Last Jedi out of the whole thing.

It makes sense that Abrams — and Disney, the studio behind the new Star Wars films — would be aware of the outrage and then try to assuage these fans’ complaints in anticipation of the final movie. His comments suggest that he’s on the same page they are about the dramatic turns Last Jedi took away from his prior film.

After the vocal backlash The Last Jedi faced, positioning Rise of Skywalker as a movie that everything The Last Jedi is not, even if it is or isn’t the case, seems like a savvy marketing decision.

Giving Abrams and company the benefit of the doubt, they probably don’t mean to cater to the worst parts of the Star Wars fandom. But when those fans read Abrams’s and the cast’s comments about The Last Jedi — the idea that the movie was subversive and that it didn’t care about true fans — it validates the nasty behavior they’ve participated in.

This is fucking bullshit. Throwing Rian Johnson under the bus to please some crazy fanboys when he made the most interesting and ambitious Star Wars movie since Empire https://t.co/3FEpiFkNyo

In a way, it seems as though the toxic harassment of Tran and social media barbs thrown at Johnson might have worked.

To many critics — and, eventually, to a number of fans who saw the film when it opened in theaters — The Rise of Skywalker seemed clearly calculated to retcon The Last Jedi in a number of different ways. For instance, the notion teased in the previous film that use of the Force might be available to anyone and not just to members of a few families, handed down through something like genetics, was mostly scuttled in The Rise of Skywalker, largely through the disappointing reveal of Rey’s parentage.

But arguably the most frustrating things that Rise of Skywalker changed from Last Jedi had to do with two of the previous film’s most important female characters: Admiral Holdo (played by Laura Dern) and engineer Rose Tico (played by Kelly Marie Tran).

In The Rise of Skywalker, characters reference the “Holdo Maneuver” — the lightspeed jump Holdo performed in Last Jedi that allowed her to ram Snoke’s Star Destroyer, thereby sacrificing herself. It’s one of Last Jedi’s most moving moments and a purposeful act of heroism, in which Holdo aims the craft before jumping. But in Rise of Skywalker, when someone suggests using the Holdo Maneuver again, they’re told it’s a “one in a million” shot, making Holdo’s sacrifice seem less like a skilled, heroic act and more like pure luck.

But much more frustrating is the change in Rose Tico’s role. In The Last Jedi, Rose is a main character who travels with Poe and Finn (with whom she seems to have a budding romance); in The Rise of Skywalker, her role is glaringly reduced. She’s on screen for barely over a minute, and what’s more, instead of being a vital part of the Resistance as she was in the previous film, she’s inessential to the plot, playing a part that could have been filled by any random character. The obvious reduction of Rose’s role to a side note, in light of the lengthy and heinous hate campaign against Kelly Marie Tran, seemed like another way the movie bent to the trolls.

Meanwhile, in the lead-up to and wake of the release, Johnson himself has been keeping a low profile — he’s been busy promoting his newest movie, Knives Out — but he has publicly defended two very important parts of Last Jedi.

On December 19, just before Rise of Skywalker’s release, Johnson responded to an angry fan on Twitter who, like many of The Last Jedi’s detractors, said Johnson ruined the character of Luke Skywalker by making him a man who succumbs to emotions, betraying the character as the uncompromising hero they always believed him to be:

Gil, I understand that point of view but I completely disagree with it. In fact I think it disrespects the character of Luke by treating him not as a true mythic hero overcoming recurring wounds & flaws, but as a video game character who has achieved a binary, permanent power-up.

Johnson, in a less explicit defense of his film, also tweeted support of Kelly Marie Tran on December 21. That tweet came a day after Rise of Skywalker was officially in theaters:

And on December 23, Johnson tweeted out a thank you to the fans who stuck with him:

When it comes to box office results, it seems as though Abrams’s push to present Rise of Skywalker as the fan-friendly alternative to The Last Jedi didn’t quite pay off. The movie failed to break the $200 million mark domestically in its opening weekend, which both The Force Awakens and The Last Jedi surpassed. Further, The Force Awakens made $494 million in its first weekend worldwide in 2015; The Last Jedi grossed $437.5 million over the same three-day period in 2017. Rise of Skywalker hauled in $373 million. And while the movie did post the second-best Christmas domestic box office gross ever with $32 million, it still has a way to go to catch up to its predecessors in total income.

Critics didn’t love The Rise of Skywalker, many calling it more or less what Abrams said it would be: a movie more preoccupied with pleasing fans than telling an ambitious story. Logic seems to suggest that the most die-hard fans, the toxic ones too, would love this movie then since they got what they wanted.

6 key moments from Cory Booker’s CNN town hall
Congressional Democrats are governing from the minority
Is biohacking ethical? It’s complicated. A new Netflix series explains why.
The next presidential debate is the last one. Trump needs to make up a lot of ground.
The Crown season 4: Is the queen a bad mom?
Brett Kavanaugh’s questionable definition of “boof,” explained