Star Wars: The Rise of Skywalker’s co-writer thinks he told Rose Tico’s complete story in barely over a minute 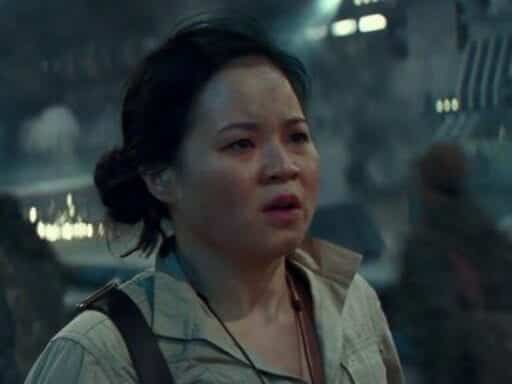 Share
Loading...
One of the few scenes in which Kelly Marie Tran appeared in Star Wars: The Rise of Skywalker | Lucasfilm

Tran faced months of racial harassment after Star Wars: The Last Jedi was released. She’s all but disappeared from The Rise of Skywalker.

After her starring role as Rose Tico in 2017’s Star Wars: The Last Jedi, Kelly Marie Tran faced so much racial abuse and harassment from toxic fans that she deleted social media, disappearing at a time when she, the first non-white actress to play a lead character in the series, should have been celebrating. Two years later, in The Rise of Skywalker, Tran’s Rose Tico has disappeared, too, appearing in the movie for barely over a minute and spending most of the movie left behind by the other heroes to “study” the villains’ technology.

The blatant reduction of Rose’s role to a side note in the movie, in light of the lengthy and heinous hate campaign against Tran, seemed like a signal that the movie appeased trolls.

But the film’s co-screenwriter, Chris Terrio, has responded to these claims by asserting that Tran’s diminished screen time was not the product of malice, but of editing and bad CGI.

“We wanted Rose to be the anchor at the rebel base who was with Leia,” Terrio told Awards Daily in an interview after the movie’s release, in which he was asked about Rose’s slim role. “As the process evolved, a few scenes we’d written with Rose and Leia turned out to not meet the standard of photorealism that we’d hoped for. Those scenes unfortunately fell out of the film.”

No doubt the death of Carrie Fisher in 2016 — before production on The Rise of Skywalker — changed and complicated the story Terrio, J.J. Abrams, The Last Jedi director Rian Johnson, and Lucasfilm wanted to tell about Fisher’s Leia and how she was going to be portrayed on-screen. The footage of Fisher used in The Rise of Skywalker was unused footage from 2015’s The Force Awakens.

Terrio also explained to The Hollywood Reporter a week later that he and Abrams inherited the project in the fall of 2017 (Lucasfilm and Disney announced Colin Trevorrow’s departure in September) and began shooting a half year later in August 2018. In that window, it seems that it never occurred to Abrams or Terrio that Tico’s Leia-dependent scenes would be a problem, nor did it seem to occur to them that Tico could have some scenes that didn’t heavily feature Leia.

Even though most of Rose’s scenes were cut, Terrio told THR he’s confident that The Rise of Skywalker told Rose Tico’s complete story.

“I do think that TROS shows Rose changing, growing, evolving. Rose begins her journey in TLJ as just about the lowest person on the Resistance totem pole,” Terrio told The Hollywood Reporter. “In TROS, Rose is at the right hand of the general, working on military plans and helping to call the shots.”

Perhaps we’ll get to see said scenes as a bonus feature when The Rise of Skywalker is available for home release. But that explanation might not satisfy fans who were hoping for more than just one minute of Rose Tico’s story.

Another round of $1,200 stimulus checks could be in the next coronavirus package
Al Franken needs to stop comparing his resignation to death
Trump announces halt to WHO funding, NYC revises death toll: Wednesday’s coronavirus news
What we know about a Thai mass shooting
The 6 key themes of Kavanaugh’s first day of confirmation hearings
Florida man who killed black man in parking lot charged with manslaughter

Class of 2021: Mondaire Jones on his “jarring” start as a first-term lawmaker