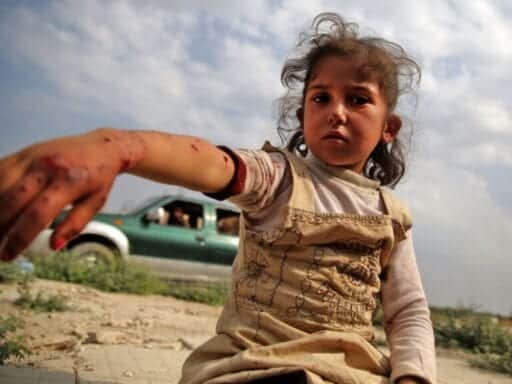 Share
Loading...
A Syrian girl reacts to her wounds on October 20, 2019, in the Syrian border town of Tal Abyad which was seized by Turkish-backed forces last week.  | Bakr Alkasem/AFP via Getty Images

“Turkey does not appear to be mitigating the humanitarian impact of its invasion and occupation of some parts of northeast Syria,” one part reads.

President Donald Trump has continuously championed his decision with withdraw US troops from northern Syria, calling the subsequent Turkish invasion of the area “strategically brilliant” for America.

But his own State Department recently distributed talking points to American embassies around the world that offer a much gloomier picture than the president and his administration have painted.

“Turkey’s military offensive is severely undermining counter-ISIS efforts, endangering innocent civilians, and threatening peace, security, and stability in the region,” read some of the talking points written by the State Department’s Bureau of Near Eastern Affairs and obtained by Vox.

That bureau oversees US foreign policy in the Syria and other parts of the Middle East, and it sent out those talking points on October 17 to American embassies around the world. US Ambassador to the UN Kelly Craft gave almost a verbatim statement to the UN Security Council just the day before they were sent out to embassies.

This goes to show that while Trump may be happy with this Syria decision, his own administration is worried about the consequences. That becomes clearer as other talking points, labeled “sensitive but unclassified,” note devastation happening inside Syria.

“Turkey does not appear to be mitigating the humanitarian impact of its invasion and occupation of some parts of northeast Syria,” the cable continues, adding that the administration had “called on Turkey to investigate possible violations of international humanitarian law, especially unlawful attacks against civilians and civilian infrastructure.” That Turkey would look into human rights violations is unlikely, though, as Turkish backed forces are responsible for multiple civilian deaths, including the murder of a Syrian Kurdish politician.

While the US does seem concerned about these events, it doesn’t plan to do much about them — and it is even discouraging foreign governments from assisting in certain parts of Syria.

The State Department’s talking points indicate that the US has chosen to withdraw civilian personnel from Syria, including humanitarian and stabilization assistance advisers that help ease suffering in war-torn countries. However, they do say the US remains “committed” to these programs and “will continue to monitor programs remotely as we do in other conflicts afflicted areas of the world.”

The removal of the personnel makes all that difficult, though. State’s points go on to highlight the $50 million in aid the US plans to distribute for “the protection of human rights and accountability” in Syria, but it’s unclear who on the ground can ensure the proper and effective use of the money. That’s likely why the talking points ask “donor governments to contribute additional funding to support stabilization programming to secure the enduring defeat of ISIS” and other humanitarian aid.

Despite asking for other nations to contribute this funding, the US also is apparently asking other countries to limit their generosity: “With the exception of emergency relief and humanitarian assistance, the United States will not provide any stabilization or reconstruction funds in areas under Turkish of Syrian Regime control; we urge you to do the same.” This part, it should be said, is consistent with the administration’s stance that Americans allies and partners should have no ties with the Syrian regime.

But put together, the US is saying that Turkey’s incursion is making the lasting defeat of ISIS harder, the humanitarian situation in the region worse, and that no government should offer financial support for the most afflicted areas — unless they mainly help the fight against ISIS.

One can only imagine the reaction in foreign capitals as their American counterparts deliver the message, especially as Trump brags about his decision 11 days ago that let all this happen in the first place.

It’s worth noting that these talking points came out hours before the US helped broker a ceasefire between Turkish and Syrian Kurdish forces that days later doesn’t seem to be holding very well. Even Defense Secretary Mark Esper shed doubt on the ceasefire’s effectiveness Sunday when he told reporters “overall the cease-fire generally seems to be holding” and that “we do get reports of intermittent fires, this and that.” (“Overall” and “generally” are quite the qualifiers).

However, a State Department official told me the talking points have yet to be updated since the ceasefire, which means these are the main messages American diplomats continue to relay around the world. The State Department’s press team did not immediately return a request for comment on Sunday, which was expected since many staffers aren’t working.

Trump had three years to plan for his desired Syria departure since he took office.

But instead of anticipating that Turkey might take advantage of the US troop withdrawal to launch military action against the Syrian Kurds — which any expert on the conflict could have told him was a real possibility — before withdrawing the troops, Trump made a seemingly spur-of-the-moment decision to pull out them out after a phone call with Turkish President Recep Tayyip Erdoğan on October 9.

That left the administration scrambling to deal with the impending Turkish invasion after having already squandered what little leverage it had to deter unwanted actions by Turkey and strike a diplomatic deal that may have at least temporarily pleased the players involved.

It’s one thing for Trump to want Americans troops out of Syria. But it’s another to take them out, unleash chaos, and do very little about it. That morally bankrupt policy, however, is official US policy at this point.

Quarantine frugality is different from traditional thriftiness
A Facebook employee has broken the company’s code of silence. It’s amazing it stayed intact this lon...
Can I get a coronavirus test at home or not?
What does “vote” merch even mean in 2020?
Why do so many millennial brands think adults want stickers?
Exclusive: Sen. Elizabeth Warren introduces nationwide eviction moratorium bill