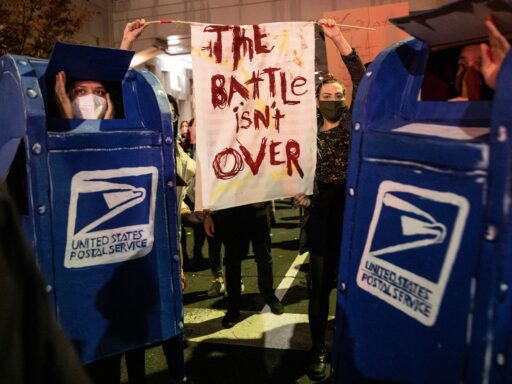 A new Brennan Center report shows an unprecedented amount of legislation seeking to restrict voting access has been introduced in state legislatures this year.

In 2020, voters turned out at the highest level in 100 years, thanks in part to expanded vote-by-mail. In response, state-level Republicans are introducing an unprecedented amount of legislation to restrict voting rights, according to a new report from the Brennan Center for Justice.

State legislators in 28 states have filed 106 bills restricting the franchise thus far in 2021 — and the overwhelming majority have come from Republicans. Compare that to last year at this time: Then, only 35 such bills had been filed in six states.

“We are seeing a backlash,” says Eliza Sweren-Becker, the report’s lead author. “Rather than going out and trying to persuade voters, we’re seeing legislators trying to shrink the electorate in order to ensure job security for themselves.”

The proposed legislation largely falls into two categories: bills that either increase the difficulties individual Americans would face absentee voting or that give officials greater leeway to shrink the voter pool. Some are attempts to roll back voting rights expansions necessitated by the pandemic; others are retreads of policies Republicans have pushed before, like expanded voter identification laws.

The passage of these laws will, essentially, depend on whether Republicans control both the statehouse and the governorship in the states in which they’ve been introduced — a reality in 18 of the 28 states. And while Sweren-Becker says their constitutionality would hinge on the way each bill is written and implemented, a lot of them have a decent chance at sticking around.

The news isn’t all bad: A whopping 406 bills have been introduced in 35 states that would expand access to voting, including permanently codifying the absentee voter policies that allowed voters in some states to cast their ballots early and remotely. Some states will consider both expansive and restrictive voting rights bills; which path the state follows will likely hinge on which party controls the legislature.

At the national level, Democrats in Congress are pushing a number of voting rights bills. Last year, the House passed the John Lewis Voting Rights Advancement Act, which would provide for federal oversight in states with a recent history of racial discrimination in voting laws. On Thursday, Sen. Ron Wyden (D-OR) reintroduced his annual Vote From Home bill with Rep. Earl Blumenauer (D-OR), which would mandate universal absentee voting — or the ability to vote by mail without an excuse — for federal elections and disallow states from imposing “additional conditions or requirements on the eligibility of the individual,” save for the postmark deadline.

“Last year we saw a widespread expansion of vote-at-home access as a safe and secure way to participate during the COVID-19 pandemic,” Blumenauer said in a release. “We should continue to make voting easier, not harder.”

At each level of government, the fight over the future of how America’s democracy operates is in full effect — and states are moving quickly.

What Republicans are trying to pass, briefly explained

State legislators’ proposals run the gamut from seemingly reasonable to downright offensive, but they all aim to lower the likelihood of a vote getting cast or counted.

They’ve also introduced them in Democratic-controlled Connecticut, New Jersey, New York, Virginia, and Washington, though those bills are less likely to succeed.

The bills contain a number of tactics to increase the individual cost of voting. With mail-in voting, three states would strengthen the excuse requirement — in Missouri, for example, the coronavirus would no longer be an excuse to vote absentee, while in Pennsylvania, a proposed bill would eliminate no-excuse absentee voting after it was passed with bipartisan support in 2019.

State legislators have proposed further limiting who can assist voters with their absentee ballots and adding cumbersome witness requirements, such as mandating witnesses to give identification information.

In Arizona, where President Joe Biden became the first Democrat to carry the state in more than two decades, Sweren-Becker said state legislators introduced a particularly egregious “voter-suppressive hat trick,” which restricts who can assist voters in delivering absentee ballots, requires all mail-in ballots to be notarized, and adds a voter ID requirement for returning ballots in person.

Legislators in 10 states introduced new voter ID laws, including creating them for the first time in six states.

In one particularly absurd example, Georgia Republicans want to require that absentee voters provide a photocopy of their ID two times throughout the voting process.

State legislators in Mississippi and New York are trying to require proof of citizenship when registering to vote, explicitly targeting noncitizens. And to increase the challenges associated with obtaining a ballot, legislators in four states introduced bills to cut election day registration.

Legislators are also trying to give election officials more opportunities to throw out ballots or purge voters from the rolls. According to the Brennan Center report, one common tactic is to make it easier for officials to remove voters from the permanent absentee list and throw out votes due to signatures mismatches — a measure introduced in Pennsylvania despite the state supreme court explicitly ruling that a mismatched signature could not be the sole reason for rejecting a ballot. Republican state lawmakers also want to increase poll watcher access to ballot-counting processes, move up ballot postmark deadlines or remove secretaries of states’ discretion in setting those deadlines, and allow officials to be more proactive in purging voter rolls, to the point of allowing practices that courts have deemed improper.

It’s an unprecedented deluge of bills, but it’s not coming out of nowhere.

Many of the bills being introduced this year aim to tackle the very practices that former President Donald Trump decried as unfair while peddling various false election conspiracies — but enacting some of his preferred reforms might actually backfire.

In the dozens of lawsuits the Trump campaign filed and saw thrown out by courts, they falsely claimed that Biden only won due to the votes of noncitizens, illegally cast absentee ballots whose signatures could not be verified (conveniently only in counties Biden won), and ballots miscounted because Trump-friendly poll watchers weren’t allowed in to watch. All of these claims were proven false by recounts and in courts, where no evidence of widespread ballot fraud was found, and it was proven that poll watchers were indeed present.

But that hasn’t stopped state GOPs from seizing the opportunity to try to justify new restrictive proposals based on Trump’s lies.

“We are certainly seeing state [legislatures] take up the mantle of this voter fraud lie and use it as a justification to restrict access to voting, to essentially enact voter suppression,” Sweren-Becker said.

Though there’s a renewed vigor to the suppression efforts in 2021, the strategy is nothing new. As Emory University historian Carol Anderson explained to Vox’s Sean Illing, America has a long history of “conservative whites continually finding new ways to rob minorities of their right to vote.” In recent decades, that’s meant state GOPs have attempted to discourage traditional Democratic voters — most notably Black voters and immigrants — from turning out.

Trump’s court challenges and Twitter rants, too, were targeted at throwing out votes in the cities of states Biden flipped, such as Detroit, Milwaukee, Philadelphia, and Atlanta — all of which have significant Black populations.

I hope y’all understand Black voter suppression doesn’t stop on Election Day. It’s just going to get worse because they know what we did. @morethanavote ✊ https://t.co/Tl0g752kjL

Trump’s issue with mail-in voting was conceptual, and he railed against it on Twitter and discouraged his followers from partaking in it. By following him on his crusade, state-level Republicans could be making the same mistake the former president did.

Historically, vote-by-mail had a nonpartisan benefit — it juiced turnout for both parties. Vote-by-mail did benefit Democrats more in 2020, but there’s no guarantee that continues to be the case. Last year, Trump discouraged his voters from taking advantage of it; his misinformation made it a partisan game. And considering his propensity for turning out new voters and low-information voters, making voting more difficult may mean his base could skip future elections where obtaining a ballot that Trump is not on requires more work.

So despite the rash of new restrictive proposals, there’s no guarantee these laws work out exactly as state Republican parties hope, if they even pass in the first place. But Trump is giving Republicans a whole new voter suppression playbook to work with — and as long as state GOPs follow his mold, restrictive voting bills are likely to feature prominently on their agendas.

One state has banned unsolicited dick pics. Will it fix the problem?
The constitutional change at the heart of the UK Parliament’s endless deadlock
Paul Ryan: “The president must appreciate that Russia is not our ally”
How the White House became a coronavirus breeding ground
5 winners and 3 losers from Joe Biden’s inauguration
12 excuses for climate inaction and how to refute them