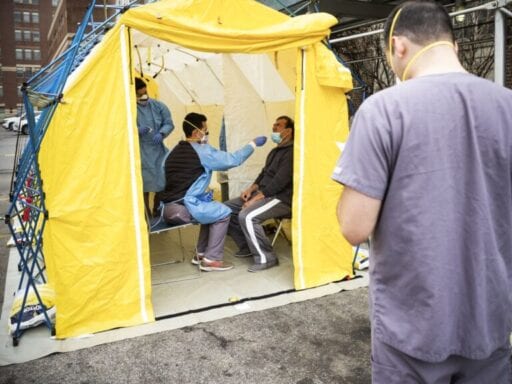 The number of novel coronavirus cases worldwide is now at more than 360,000, according to data from Johns Hopkins University. As testing has become more available in the United States, the number of confirmed cases here has also jumped, to more than 35,000 as of March 23.

New York City is the epicenter of the coronavirus outbreak in America, but state and local officials across the country are confronting two major issues right now: not having the hospital capacity needed to treat and care for all the sick people, and not having enough personal protective equipment (PPE) — masks, gloves, and other protective gear that health care workers need to wear to prevent infection for themselves and others.

Health care workers are increasingly nervous about their access to this gear, but the Trump administration has been somewhat cagey on exactly how much gear has been distributed, and has been reluctant to use the Defense Production Act (DPA) to force companies to begin production on this vital equipment.

The coronavirus crisis has also triggered an economic one, as the extreme social distancing measures and shutdown orders take their toll. One estimate suggests we could see as many as 2.25 million new unemployment claims just last week alone.

But so far Congress hasn’t been able to agree on what an economic aid package should look like — even as more lawmakers find themselves diagnosed with Covid-19, or in self-isolation because they’ve been exposed.

Here’s the news you might have missed over the weekend, and what to know today:

Where is the PPE?

“We are desperate,” a nurse who works in a New York hospital told Caroline Hopkins, writing in Vox. “Please urge anybody who can donate any masks, but most importantly N95s, to do so.”

This is not an exaggeration. Across the country, health care professionals are begging for the basic equipment — gloves, masks, and surgical gowns — they need to safely treat coronavirus patients, other patients, their family, and themselves.

Public health officials in the Trump administration are struggling to address the problem, and have begun updating guidelines for hospitals on what to do if supplies run out. These include allowing health care workers to reuse masks and limiting the amount of protective gear distributed to these workers on a daily basis. These measures obviously carry their own risks, though, and are not exactly a great solution.

And this doesn’t even cover the potential shortages in equipment needed to treat coronavirus patients, including respirators and ventilators.

FEMA is stepping in to distribute protective gear and other equipment to states, but FEMA director Peter Gaynor could not say exactly how much had been given out when he appeared on the Sunday shows this weekend. “Again these are finite, limited resources,” Gaynor said. “Will we ever have enough? I’m not sure. But our goal is to make sure we get these critical resources to the places that need them the most.”

Health care workers and state officials are calling on the federal government to make up for the shortfall by invoking the Defense Production Act (DPA), which would allow the government to order businesses to increase domestic production. President Trump has signed an executive order allowing this, but has been reluctant to act on it.

Trump has said companies have been volunteering to increase production, making such measures unnecessary. He also implied that using the DPA would be a form of socialism. “We’re a country not based on nationalizing our business. Call a person over in Venezuela,” Trump said at a press conference on Sunday. “How did nationalization of their businesses work out? Not too well.”

This isn’t how the DPA works. It doesn’t nationalize businesses, but rather allows the US government to contract with companies to prioritize manufacturing of critical goods — in this case, medical supplies.

State officials keep saying that without some sort of government guidance, they’re left competing for the same equipment (as opposed to having that equipment go where it’s most needed) and thus overpaying.

“We’re competing against each other, we’re competing against other countries, it’s a wild west, I would say, out there, and indeed, we’re overpaying for PPE because of that competition,” Illinois Governor J.B. Pritzker told CNN’s Jake Tapper on Sunday. He also said that while FEMA gave the state much-needed supplies, it was a fraction of what Illinois requested, and needs.

The recommendations also tell people to listen to their state and local officials and to follow the restrictions they’ve implemented, as many places are implementing more stringent stay-at-home orders.

As the title implies, the president’s social distancing guidelines ask people to do all of this for 15 days from the day they were first introduced at the beginning of last week.

Right now, we’re only about a week into the president’s recommendations (so, about halfway through the 15-day period), and many people are already starting to wonder what is going to happen once those 15 days are up. The number of cases and deaths from coronavirus continue to rise, but few believe the US has it its peak of cases, even with these painful social distancing measures now in place. Which means that 15 days may very well need to be extended by several more weeks, if not months.

But as the economic fallout looks bleaker and bleaker, the president has sent out a few tweets that seem to undermine the very message he’s trying to get across — which is that, to “flatten the curve,” the American people need to make some tremendous and painful sacrifices.

“WE CANNOT LET THE CURE BE WORSE THAN THE PROBLEM ITSELF,” Trump tweeted Monday. “AT THE END OF THE 15 DAY PERIOD, WE WILL MAKE A DECISION AS TO WHICH WAY WE WANT TO GO.”

WE CANNOT LET THE CURE BE WORSE THAN THE PROBLEM ITSELF. AT THE END OF THE 15 DAY PERIOD, WE WILL MAKE A DECISION AS TO WHICH WAY WE WANT TO GO!

He also retweeted a bunch of posts including from right-wing pundits, suggesting that after 15 days, just the sick and high-risk can be isolated, and everyone else can get back to work.

It’s really nice to have a deadline to work toward, but there is no indication that the US will have the testing capacity in that time frame to successfully isolate such groups — which means that even if the 15-day period is successful at slowing the spread of the virus, it could quickly come roaring back once those social distancing measures are abandoned.

Trump’s concerns about the economy might put him on a collision course with the public health experts in his own administration. The New York Times reports that the White House is starting to rethink letting the medical experts set policy, which is hurting the economy.

Axios also reported Monday that the Trump administration is becoming increasingly concerned about the strains on the economy, and that the White House may revise CDC guidelines to allow people exposed to coronavirus to return to work with a mask (though where the masks will come from is still unclear).

Bipartisan disagreement on stimulus package, even as Covid-19 comes to Capitol Hill

On Sunday, a $1.8 trillion coronavirus stimulus package failed to advance in the Senate. Democrats blocked the bill, saying it didn’t go far enough to help American households and leaned too much in favor of businesses.

Democrats, in particular, are objecting to a $500 billion loan program to businesses, which they say would give the Treasury Department too much discretion in who gets funding, and which doesn’t offer enough restrictions — for example, preventing firms who get this money from firing workers.

The economic stimulus will provide direct money to most American households, specifically $1,200 to every tax filer and $500 per child, though that may still leave out some vulnerable Americans who do not file taxes, which some Democrats also want to fix.

Lawmakers are in marathon talks, but they don’t have a lot of time. The American economy is being battered by the coronavirus, stocks continue to tank, and millions have likely lost their jobs. What’s more, coronavirus has hit Congress — and the Senate is still not permitted to vote remotely. Sen. Rand Paul (R-KY) was the first senator to test positive, and since others have been in contact with him, including Sen. Mitt Romney (R-UT), they are self-isolating now.

Neil Diamond has updated his classic song “Sweet Caroline” for the age of social distancing, so you have something new to sing while washing your “hands…washing hands” for 20 seconds.