Stephen Miller is a product of “chain migration,” his uncle says 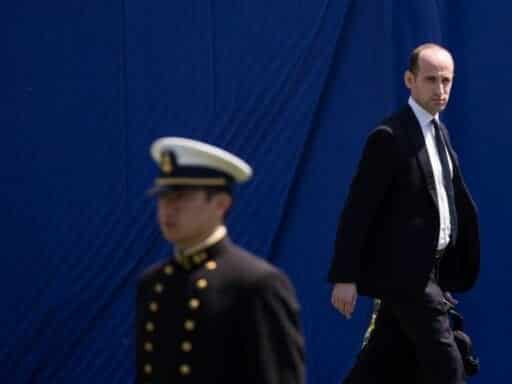 David Glosser writes that Miller “has become the architect of immigration policies that repudiate the very foundation of our family’s life in this country.”

Stephen Miller, the senior policy adviser to the president and one of the ideologues pushing the administration’s hardline immigration policies, is a product of the so-called “chain migration” he and President Donald Trump often deride. That’s according to his uncle, who penned an essay in Politico outlining Miller’s family’s immigration story on Monday.

David Glosser, a retired neuropsychologist and Miller’s uncle on his mother’s side, detailed the story of how the family came to live in the United States. Miller’s great-great-grandfather Wolf-Leib Glosser left the village of Antopol in what is now Belarus amid “violent anti-Jewish pogroms” there and came to the US. He landed on Ellis Island in 1903 and, over time, was able to bring over the rest of his family.

Through that generation and the next, the family built a chain of supermarkets and discount department stores run by Miller’s great-grandfather and his grandfather Izzy. The family eventually became American citizens. It’s the type of “chain migration” — or family-based migration — that immigration hardliners, including Miller, say they hate.

“I have watched with dismay and increasing horror as my nephew, who is an educated man and well aware of his heritage, has become the architect of immigration policies that repudiate the very foundation of our family’s life in this country,” Glosser wrote.

The essay is in part a rejection of the immigration policies his nephew supports and at the same time a plea for him to reconsider:

I shudder at the thought of what would have become of the Glossers had the same policies Stephen so coolly espouses — the travel ban, the radical decrease in refugees, the separation of children from their parents, and even talk of limiting citizenship for legal immigrants — been in effect when Wolf-Leib made his desperate bid for freedom. The Glossers came to the US just a few years before the fear and prejudice of the “America First” nativists of the day closed U.S. borders to Jewish refugees. Had Wolf-Leib waited, his family would likely have been murdered by the Nazis along with all but seven of the 2,000 Jews who remained in Antopol. I would encourage Stephen to ask himself if the chanting, torch-bearing Nazis of Charlottesville, whose support his boss seems to court so cavalierly, do not envision a similar fate for him.

Miller, 32, is a fierce proponent of restricting both legal and illegal immigration to the United States.

As Vox’s Jane Coaston writes, he was passionate about the subject even in high school and bonded with his former boss, then-Sen. Jeff Sessions, over the matter. Miller designed the initial version of Trump’s travel ban and agreed with former White House chief strategist Steve Bannon when in a March 2016 radio interview Bannon complained that the number of immigrants in the country is a “massive problem.”

In his Politico essay, Glosser wrote that perhaps Miller and Trump “have become numb to the resultant human tragedy and blind to the hypocrisy of their policy decisions” after spending so much time “in the theater of right wing politics.” But he also noted that Miller isn’t the only family with chain immigration in Trump’s orbit: Trump’s grandfather is reportedly a German migrant, his mother fled Scotland for the US, and, of course, first lady Melania Trump’s parents became citizens just last week.

“No matter what opinion is held about immigration, any government that specifically enacts law or policy on that basis [of ethnicity, country of origin, or religion] must be recognized as a threat to all of us. Laws bereft of justice are the gateway to tyranny,” Glosser wrote. “Today others may be the target, but tomorrow it might just as easily be you or me.”

You can read the full essay for Politico here.

How voting by mail could save the US election
Redditors love Infinity War’s Thanos so much, 300,000 of them just faked their own internet deaths
Joe Biden wins the Arkansas Democratic primary
Trump advisers are scrambling to sell the idea that a recession isn’t going to happen
The Democratic establishment is doing a really bad job of stopping Bernie Sanders
Arizona’s primaries could provide a hint as to whether Democrats can take the Senate