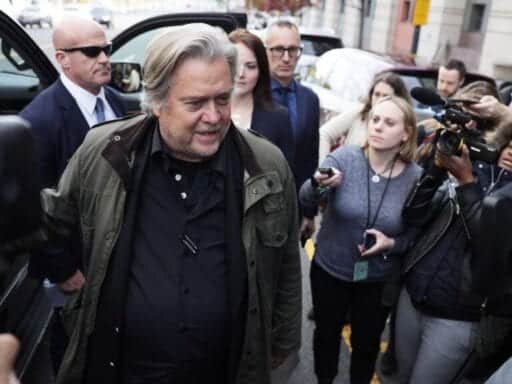 Here’s what he said.

As the trial of Roger Stone stretched into its fourth day on Friday, prosecutors called their biggest name yet to the witness stand: Steve Bannon.

The former White House chief strategist and Trump campaign CEO stressed that he was appearing under a subpoena, rather than voluntarily. “I have been compelled to testify,” he said.

But he proceeded to explain that, in 2016, Stone suggested to him several times “that he [Stone] had a relationship with WikiLeaks and Julian Assange.”

All this relates to the government investigations of Russian interference in the 2016 election. Part of that interference, special counsel Robert Mueller says, was through Russians’ hacking of Democrats’ emails — and the provision of those emails to WikiLeaks, for publication.

Both Mueller and congressional investigators attempted to get to the bottom of what happened with the hack-and-leak, and whether any Trump advisers were involved. As part of that, they scrutinized Roger Stone — and now he’s on trial facing charges of obstruction and lying to the House Intelligence Committee on the topic of WikiLeaks.

Bannon’s testimony was important to prosecutors for two main reasons. First, one of the false statements charges against Stone stems from his having told the committee that he did not share information about WikiLeaks with the Trump campaign.

Now, Bannon testified that the Trump campaign didn’t really have an official access point to WikiLeaks — but that the closest thing to that would have been Roger Stone.

Stone, he said, had been making comments both publicly and privately suggesting that he had some sort of a relationship with Assange, WikiLeaks’s founder. So when Bannon wanted to know why Assange hadn’t released new damaging documents by early October, Bannon emailed Stone asking what was up. He did so, he testified, because Stone was “the guy” who had told him he “knew WikiLeaks and knew Assange.”

WikiLeaks did have a major release starting on October 7 — they began posting the hacked emails of Hillary Clinton campaign chair John Podesta in daily batches. And around that time, Bannon testified, he “believed” I “heard that Roger Stone was involved in the release of those emails.”

The second reason Bannon’s testimony is important to prosecutors is that, in his telling, Stone began privately claiming that he had a “relationship” with WikiLeaks and Assange quite early — perhaps all the way back in spring 2016, he said. (This was before Bannon had joined the Trump campaign.)

The timeline matters because several of the charges against Stone allege that he engaged in a cover-up — that he falsely told Congress that all his information about WikiLeaks came from one source, radio host and comedian Randy Credico.

But the government claims that Credico could not have been Stone’s initial WikiLeaks connection, because he had no contact with the group until late August 2016, and even that was only to do a radio interview with Assange. (Credico claimed Stone used him as a “patsy.”)

So Bannon’s testimony that Stone claimed to have a WikiLeaks relationship much earlier will be used by the government to argue that Stone lied to cover up the true nature of his contacts with WikiLeaks.

What the trial has mostly avoided is evaluating whether Stone in fact had good information on what WikiLeaks was planning. Defense lawyer Robert Buschel asked Bannon whether, today, he believes Stone had made accurate predictions about WikiLeaks’s plans — but prosecutors objected to the line of questioning, and the judge sustained their objection.

The trial will resume Tuesday, and at some point next week, another former Trump campaign aide — Rick Gates, who became a cooperating witness for the Mueller investigation — is expected to testify as well.

San Francisco’s facial recognition technology ban, explained
Amazon wants to patent technology that could identify shoppers by their hands
The next Democratic debate is only 12 days away
China just arrested a top Hong Kong pro-democracy figure. Beijing isn’t playing around.
The case that America’s in decline
“They should have reacted faster”: 6 Covid-19 survivor stories from around the world