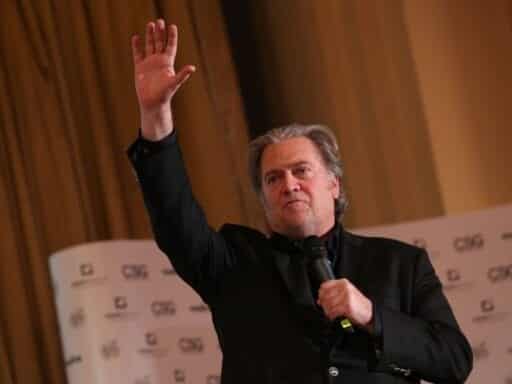 Bannon’s plan to start an organization called “the Movement” says more about him than Europe.

Trump’s former consigliere, Steve Bannon, has a new project. He wants to bring the entire European far-right together to take down the EU — and he’s founding an organization, called the Movement, to try to make it happen.

The basic idea behind the Movement, Bannon told the Daily Beast, is to try to provide policy, polling, and strategic support for far-right parties across the continent in the run-up to the May 2019 European Parliament elections. The goal is to turn the EU legislature, historically a consensus-minded body, into a battleground that the far right can use to undermine the coherence of the entire European project.

“Next May is hugely important,” Bannon told the Daily Beast. “This is the real first continent-wide face-off between populism and the party of Davos. This will be an enormously important moment for Europe.”

This all sounds scary! But as is usual with Bannon, it’s more bark than bite. There really is a kind of pan-European far-right bloc forming, centering on leaders like Hungary’s Viktor Orbán and Italy’s Matteo Salvini. The growing influence of these politicians really does pose a threat to the coherence of the European Union.

But the idea that a largely disgraced American political strategist will be the person to unite them in a fearful movement — with only a handful of staff members and unclear funding — is questionable at best. The breathless attention this has gotten in the press speaks more to the way Bannon has built up a mythology around himself than it does to the actual state of European politics.

Reasons for skepticism about The Movement

Bannon has long dreamed of an international right-wing uprising against the “globalist” establishment. He sees the world in broadly ideological terms, positioning a pro-migration and pro-trade elite against a global middle class that believes deeply in the virtues of nationalism.

Europe is a natural place to try to turn these dreams into reality. Right-wing populism is ascendant across the continent: It gave us Brexit and anti-migration leaders in countries like Austria, Italy, and Hungary. Nationalist parties in different countries should in theory have trouble cooperating — but they share a common enemy in the European Union, which facilitates free movement of people across the continent. These parties could benefit from more coordination in their anti-migration and anti-EU efforts; it’s not crazy to see why it would help to have an organization dedicated to this alone.

But is Steve Bannon really the guy to do it? This is a man who was, by most accounts, outmaneuvered by his rivals inside the Trump administration — like Jared Kushner and Gary Cohn — and forced out in the wake of an impolitic phone call to left journalist Robert Kuttner. He then returned to Breitbart in 2017, briefly, before he was quoted saying something insulting about Trump in Fire and Fury — which lost him both his Breitbart job and backing from his principal source of funding, conservative billionaires Rebekah and Robert Mercer.

As a result, Bannon is operating on a shoestring budget: According to the Daily Beast, Bannon plans to hire “fewer than 10 full-time staff” at the Movement in the run-up to the 2019 EU elections. This includes “a polling expert, a communications person, an office manager and a researcher.”

Bannon himself isn’t necessarily planning on being full time; he aims to spend “50 percent” of his time in Europe in the run-up to the 2019 elections. That’s because he has other projects: He’s simultaneously working on a cryptocurrency project that will provide, in his words, “utility tokens for the populist movement.”

So to be clear: Bannon is founding an organization aiming to sway European elections — which he has zero experience doing — with a skeleton staff and no announced source of external funding, all while experimenting with starting up his own version of Bitcoin.

We don’t have to indulge Bannon’s self-image

But when you dig into the substance of Bannon’s work, things start to fall apart. He co-wrote the first edition of the Trump administration’s Muslim ban, but paid so little attention to the details of the policy implementation that the administration was forced to rescind Bannon’s version and rewrite it with input from actual lawyers. His grand ideological vision is centered on a faux-visionary idea of history’s “four turnings,” a theory that one actual historian described as “crackpot.”

In his public rhetoric, Bannon speaks in such broad strokes, with so little attention to detail, that his ideas often end up being substanceless or incoherent. Look, for example, at this recent interview with the Spectator’s Nicholas Farrell. Here’s what he said when asked about the Italian election:

I have to be very careful. Nick, we’re in a global war, right. That goes from Japan and the Philippines to the peninsula of Korea right around the world. It’s been ten years coming, It is just starting. What’s happening in Italy is a defining moment.

Wait, what? What connects South Korea’s left-wing president, Japan’s center-right prime minister, and autocratic Philippine populist Rodrigo Duterte, other than the fact that they’re all in Asia? What do any of the political conflicts in any of those countries have to do with the Italian election or European anti-immigrant populism more broadly?

Who knows! But it sure gives Bannon the appearance of having a sweeping vision and brilliantly restless mind, which is the real point of it. Ultimately, that’s the lens through which “the Movement” should be viewed — a Bannon vanity project — until proven otherwise.

The European right is a real and important force, a major sign that the post-Cold War liberal consensus is in trouble in the same way as Donald Trump’s initial victory was. In both cases, though, it feels more like Bannon hitched his star to an ascendant political force rather than being the guy who was behind its rise (recall that he was the third person to head Trump’s campaign).

Bannon wants everyone to think of him as a deep political thinker and modern intellectual. But the little he’s done, either inside the White House or outside, suggests he deserves that status. We shouldn’t grant it to him.

On Waiting
Facebook is banning political ads ... after the election
Here are all the major tech conferences canceled so far because of Coronavirus
Romance is publishing’s most lucrative genre. Its biggest community of writers is imploding.
Welcome to the September issue of Vox’s The Highlight
An artist painted on the American flag. The governor of Kansas wants her work destroyed.