Still dealing with 2016 drama, Democrats vote to strip superdelegates of some of their power in 2020 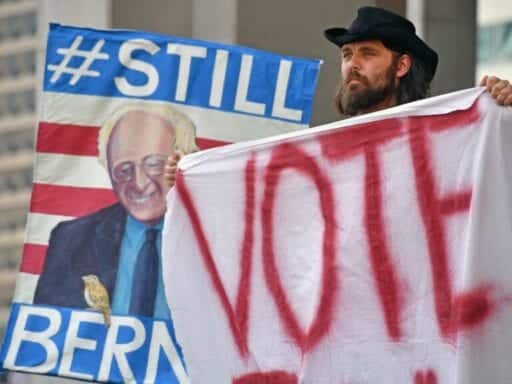 It’s an issue Bernie Sanders supporters have been focused on for a while.

The Democratic Party, still parsing the 2016 primary contest between Hillary Clinton and Bernie Sanders, on Saturday voted to limit the power of so-called “superdelegates” in selecting the party’s presidential nominee. It’s a win for the party’s left, members of which have voiced concerns that the prior system favored pre-ordained picks and diminished voters’ say.

The Democratic National Committee in a meeting in Chicago on Saturday voted to approve the change, which prevents superdelegates from voting on the first ballot in a contested national convention.

Only pledged delegates — whose votes are decided by the primary or caucus results for their states or territories — will get to vote the first time around at the Democratic national convention, where the party picks its presidential nominee. Superdelegates — DNC members, elected officials, and party leaders who are unpledged and basically get to vote for whomever they want — won’t get to vote on the first ballot if the convention is contested.

They will get to take part in subsequent rounds of voting, but historically, that wouldn’t have mattered: The Democratic nominee has been settled on the first ballot of every convention since the 1970s.

Superdelegates and their power within the Democratic Party has been an issue eating at progressives since the 2016 election, when Sanders supporters complained that superdelegates skewed the nomination unfairly toward Clinton. (Superdelegates did not decide the Democratic nomination for Clinton — she got more votes than Sanders and won the pledged delegate total.) But post-2016, there’s been a growing push to strip superdelegates of some of their powers, especially because some of them declare their loyalties before much primary voting has even taken place.

Sanders in a statement said that the decision was “an important step forward” for the DNC. “This has been a long and arduous process, and I want to thank Tom Perez and all of those who made it happen,” he said.

Perez, chairman of the DNC, said Saturday was a “historic day for our party.”

Beyond the superdelegate change, Democrats also voted for other reforms, including requiring state parties to accept absentee votes in caucuses and encouraging states to open their primaries and caucuses to independent voters and expand same-day registration, according to NBC News.

Not everyone was pleased with the superdelegate change. As Politico notes, some longtime Democratic Party officials fiercely opposed the overhaul, saying it would disenfranchise party insiders. NBC News reports that black delegates of the older generation specifically worried it would negatively affect black and Latino party leaders.

“This vote to strip superdelegates, unpledged delegates, automatic delegates, whatever you want to call us of our voice on the first ballot is inconsistent with our charter,” former DNC Chairwoman Donna Brazile told Politico.

But theirs was a minority opinion, and so the new superdelegate rules will be in place for 2020.

A woman in a vegetative state suddenly gave birth. Her alleged assault is a #MeToo wake-up call.
Donating $10 billion isn’t the best way for Jeff Bezos to fight climate change
Boycotts show us what matters to Americans
New coronavirus cases reported at reopened Tesla factory. This doesn’t look great for Elon Musk.
In Vivarium, Jesse Eisenberg and Imogen Poots get very stuck in suburbia
How McKinsey infiltrated the world of global public health