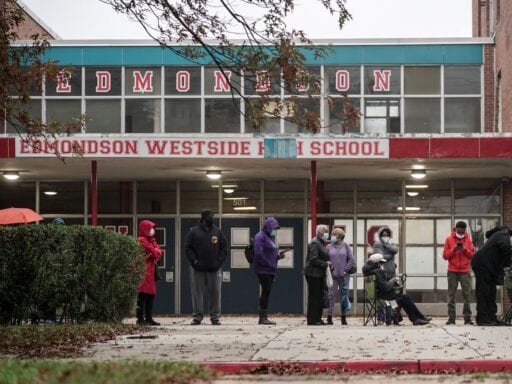 Share
Loading...
Residents of Baltimore City line up to vote as early voting begins in the state of Maryland at Edmondson High School on October 26, 2020, in Baltimore, Maryland. | J. Countess/Getty Images

Tuesday is the last day to safely mail your ballot. Here’s what to do if you missed the deadline.

More than 67 million Americans have already voted in the 2020 election, and if you’re not one of them: What are you waiting for?

Whatever the reason, don’t wait any longer: Make a voting plan now.

But just one week out from Election Day, your voting plan needs to be realistic. Specifically, you should now plan to vote in person or drop off your mail ballot, if you already have one.

To put it another way: It’s now probably cutting it too close to send your ballot through the mail.

The United States Postal Service recommends that “as a common-sense measure, you mail your complete ballot before Election Day, and at least one week prior to your state’s deadline.”

Deadlines vary by state. Some states require ballots to be received or postmarked before Election Day (Louisiana, for example, must get your ballot by November 2). Others require that ballots be received by Election Day to be counted, and this includes swing states like Wisconsin and Michigan.

Some states require ballots to be postmarked by Election Day, but have cutoffs on how late they can be received. For example, Pennsylvania requires a November 3 postmark, but those ballots have to arrive by November 6, or they won’t be counted.

(You can look up your state’s information here.)

So today really is the deadline. If you haven’t dropped your stamped ballot in the mailbox yet, it’s time to come up with a new plan.

The good news is there is still plenty of time for that! If you have a mail ballot in hand, you should still have the option to drop it off with election officials, a polling place, designated drop-off location, or drop box before or on Election Day. And if you hadn’t thought about voting until today, it’s time for you to figure out how you’ll vote in person, either early or on Election Day.

If you still want to “vote by mail,” drop that ballot off

Voting by mail doesn’t have to mean literally voting by mail. Most states offer some form of drop-off option.

Many states allow you to drop your ballot off at your local election office. At least 20 states will let voters drop off their mail ballots at your polling station on Election Day. And about 40 states are offering some sort of drop boxes where voters can return ballots, though it may depend on the county where you live.

But as always, check the rules of your state, or call your local election officials, to find the best drop-off option.

If you requested a mail ballot and haven’t received it, or if you have a mail ballot and haven’t turned it in yet, you can still vote in person. Many states, like Pennsylvania, require you to bring your mail ballot to the polling station and turn it in to poll workers. If you don’t have a ballot — you requested a ballot but never got one, or you threw it out, or your dog chewed it up — that’s also okay. But, as in Pennsylvania, you may have to vote via provisional ballot, which will count as long as election officials can verify you didn’t already vote by mail. This is just a safeguard against people voting twice, which is illegal, despite what people are saying.

A few states, such as New York, automatically let your in-person vote override your mail vote, but definitely check your state’s rules first. Other states, like Florida, ask that you bring your ballot in, but if you don’t have it, election officials will let only let you cast a ballot in person if they can verify you haven’t already submitted a vote-by-mail. Some states, like Michigan, may ask voters who don’t turn in their ballots to sign an affidavit canceling any mail ballot before they can vote.

If you’ve sent in your ballot already, or are planning to drop it off as soon as you finish reading this, do sign up for ballot tracking, if it’s available where you live. Many other states let you track the progress of your ballot on a voter portal on a state or local election site. This will tell you whether election officials have received your ballot, and, in some cases, it will let you know whether it’s been rejected or accepted.

If your ballot has been rejected, some states allow you to go through what’s called a “cure process,” and many other states have adopted procedures to cure ballots during the pandemic. This process allows voters to fix any mismatched or missing signatures, or other possible mistakes that might otherwise prevent your vote from being counted. In many places, election officials are supposed to reach out to voters directly, but if anything seems amiss with your mail-in vote, you can always call the election office yourself.

Otherwise, plan to vote in person as soon as you can

Voting in person is always an option for those who haven’t cast their ballots already. If possible, you should do it now, or as soon as you can, rather than waiting until Election Day on November 3.

About 40 states offer some form of early in-person voting, and much of it is happening this week. The dates and times vary by state and county, so check them out here. Lines have been long in some places for early voting, but they could be far worse on Election Day, and if you for some reason can’t wait in line on November 3, you might miss your chance to vote at all.

But if you can only vote in person on Election Day, then stick to that plan, and do it!

For those concerned about the Covid-19 risk of voting in person, public health officials say it’s relatively safe, and about as risky as going to the grocery store. You should still take precautions, though, like wearing a mask, trying to stay six feet apart from others while standing in line and inside the polling place, and washing your hands or using hand sanitizer once you’ve voted.

If you’re still worried, check with your local election officials to see what kinds of precautions they’re taking at your local site. This is another reason to vote early, and to try to do it during off hours, when the polls might be less crowded.

As Vox’s Dylan Scott reported, voting by mail may be the safest option from a public health perspective, “but whether it’s simply too late for you to vote by mail or you prefer to vote in person to eliminate the possibility of any mistakes in your ballot being processed, you can vote safely in person.”

There is still plenty of time to cast your ballot. The United States could see unprecedented turnout this election, but that still requires everyone who’s eligible to get out and vote. So go and do it, now.

Latino voters might have saved Bernie Sanders’s campaign
Democrats have made a puzzling decision to drop their demand to end fossil fuel subsidies
One Republican senator’s revealing explanation of where the party stands on Brett Kavanaugh
Everywhere basic income has been tried, in one map
The biggest stories headed into the 2020 Grammys
The US just broke its record for the highest number of new coronavirus cases in a day