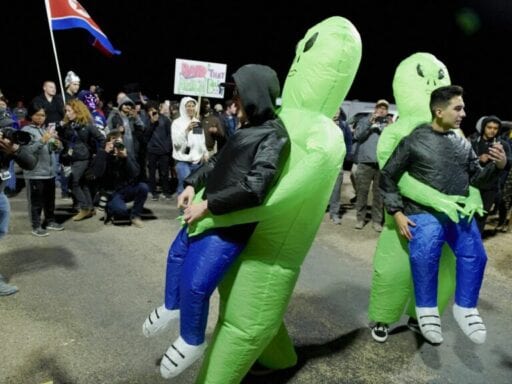 A guide to the competing alien-themed events taking place in Nevada in the aftermath of a viral meme.

Against all odds, the unglamorous, top-secret government facility known as Area 51, located in the remote Nevada desert, has become the hottest weekend getaway of the fall. Or, at least, it could be: A tongue-in-cheek Facebook page proposing a mid-September “raid” on the place, which some conspiracy theorists have long insisted holds the clues to extraterrestrial life, has amassed the attention of millions since it popped up in early July. What began as a joke designed by an internet-savvy college kid has snowballed into three separate real-life events intended to build on the momentum of summer 2019’s most popular alien meme.

Young people looking for a laugh, proselytizing UFO believers, and small-town locals — both resentful of the attention directed toward the tiny town of Rachel, Nevada, and looking to capitalize on it — are all set to descend upon Area 51. But what will actually happen this weekend remains in doubt: There have already been serious economic ramifications and dramatically broken partnerships, amid mounting concerns that any planned Area 51 celebrations are nothing more than elaborate wastes of time.

To say that the Area 51 “movement” has gone from viral Facebook post to a possible disaster, like the Fyre Fest, would be hyperbolic. But to look at the Area 51 weekend’s schedule of events is to see a constellation of indefinites, a series of parties planned by people whose experience in doing so is wanting.

The Storm Area 51 event started out as a joke. Now it’s “a possible humanitarian disaster.”

The original Storm Area 51, They Can’t Stop All of Us Facebook page called for a raid on Area 51 to take place on Friday, September 20 at 3 am local time. The ask: “We will all meet up in Rural Nevada and coordinate our parties. If we naruto run, we can move faster than their bullets. [Let’s] see them aliens.”

The page’s creator, 21-year-old Matty Roberts of Bakersfield, California, maintains that he created the event purely as a joke. But that joke went viral in July, spawning memes about aliens moving into people’s houses and the military trying and failing to prevent a bunch of anime-quoting teens from entering the premises. Billboard record-breaker and rap sensation Lil Nas X even released a music video for a remix of his hit song “Old Town Road” that heavily referenced the event.

By late July, more than 2 million people had RSVP’d for the joke event. If those numbers, and the Lil Nas X music video, didn’t grant the meme all-timer status, then the US military definitely did. The Air Force issued an official warning, reminding all would-be alien seekers that Area 51 is still off-limits to civilians, and that helicopters and military aircraft would be on hand to turn everyone back. ”There’s going to be a force to reckon with,” one spokesperson told the New York Times.

Roberts’s joke had already prompted more of a reaction than he’d ever expected — the FBI even paid a visit to his home, he told Vox, “just to make sure I’m not some actual terrorist but rather just some shitposter.” And in that mainstream recognition, Roberts saw an opportunity to start a movement. Yes, it was unlikely that even a tenth of the Facebook users who’d RSVP’d yes on the Facebook page would actually show up in the middle of nowhere for this implausible and unsafe operation. But hotels in the vicinity of Area 51 were getting bookings. If people were heading out anyway, he thought, maybe they would be down to camp out in the desert, collect some alien-themed swag, and listen to live music?

In August, Roberts announced the offline iteration of the Storm Area 51 event: Alienstock, a festival that would take place in Rachel, Nevada, the town that lies closest to the borders of the Area 51 site. The Little A’Le’Inn, Rachel’s only local business, would serve as co-host — a partnership that dismayed other locals and county law enforcement, who felt woefully unprepared for the possible tourist influx. For perspective, even a few thousand attendees would dwarf the actual population of tiny Rachel, Nevada, home to just over 50 people, most of them retirees.

Alienstock’s website offered parking and camping passes for upward of $140, encouraging attendees to pay up and spend the whole weekend of September 20-22 vibing with fellow alien/meme enthusiasts. It’s hard to gauge how many people purchased tickets; no official numbers have been released. Details were scarce: Roberts said that big-name bands would play, although he didn’t say which ones. The entire event appeared to be relying solely on donations or other unspecified sources of funding to provide water, bathrooms, and security — none of which were promised. The only thing any potential ticket buyers could reasonably expect was maybe they’d meet the guy who started the meme.

The event hardly seemed enticing, and it would very likely be unsafe. That’s what the citizens of Rachel argued when they presented a laundry list of concerns regarding the safety of both residents and visitors to their county council, not long after Alienstock’s announcement. Their anxieties ranged from fear of pickpockets to worries that drivers unfamiliar with open-range practices would hit and injure the cattle who roam the area or be injured themselves to the possibility that the influx of people would zap utilities including cell phone coverage, leaving the entire area stranded with no emergency services.

And have we mentioned the nearest gas station is 50 miles away?

Few were surprised when, less than two weeks before Alienstock was set to start, Roberts pulled out of his proposed desert hang.

“Due to the lack of infrastructure, planning, and risk management, along with concerns raised for the safety of the expected 10,000+ attendees, we decided to transition Alienstock away from the Rachel festival towards a safer alternative,” declared the website for Roberts’s event.

“We are not interested in, nor will we tolerate any involvement in a FYREFEST 2.0. We foresee a possible humanitarian disaster in the works, and we can’t participate in any capacity at this point.”

Roberts’s original vision of Alienstock was no more. In its place arose something much less exciting but much safer: an EDM show at the Downtown Las Vegas Events Center on the evening of September 19, also dubbed Alienstock and co-sponsored by Bud Light. Vox was in attendance to witness Hula-Hoopers in neon outfits mingling among scattered signs and shirts referencing the meme. Scattered attendees held cans of watery beer emblazoned with alien imagery. A countdown clock to the show’s ostensible start went off with a very brief bang: footage of the anime character Naruto and an electronic remix of Storm Area 51 news footage that was shockingly danceable.

Though he reportedly did make a brief appearance, Roberts himself was nowhere to be found.

Alien hunters: Don’t count out Rachel, Nevada, quite yet — but don’t expect a warm welcome from the locals

Meanwhile, Connie West, proprietor of the Little A’Le’Inn and Roberts’s original Alienstock co-host, is still planning to continue with its own event, now billed as “Alien-Stock” (note the dash), a three-day “OFFICIAL Storm Area 51 Festival.” Although Roberts served West a cease-and-desist notice over her use of the name, West soldiers on — she even has a lineup of musicians advertised on the Little A’Le’Inn’s website.

(As Time observed, Alienstock in Rachel is the only event that released a musical lineup prior to the weekend. Bands include Speed of Light, a punk band composed of a trio of teen siblings; a band called Brothers of Alien Rock, which fittingly dresses up as aliens and has an entire extraterrestrial lore; and an all-girl pop group called Pynk Le’monade that claims to have worked with “DJ Skrillex, Pitbull, Christina Aguilera, TI, and more.”

Music aside, who knows what will happen at West’s Alien-Stock? The event remains otherwise ambiguous, but the fact that a lineup exists does suggest some dedication to encouraging partying memesters to stick around Rachel for a few days.

There’s no word on whether West has responded to any of the country council’s requests to explain how her establishment will support the infrastructural needs of such an event, however. (West herself has not responded to a Vox request for comment.)

The official website of Rachel, Nevada, is fascinatingly anti-tourist, warning visitors to stay away from Rachel residents or face armed homeowners, and bluntly telling them to prepare for a miserable trip:

“So far we see a couple of hundred people in Rachel for the botched Alienstock event. Law enforcement clearly outnumbers visitors. There are no vendors and not much of an infrastructure. A makeshift stage was set up on a dusty dirt lot and a few campers are parked around the area. This has very clearly become Fyre Fest 2.0 after the creator of the Storm Area 51 movement pulled out and the organizers started suing each other.”

Not all heroes wear capes. Some naruto run on television. pic.twitter.com/vR6LWnMBW5

Separate from the push and pull of Alienstock vs. Alien-Stock is an independently planned event called Area 51 Basecamp. Basecamp is billing itself at once educational and authentically fan-oriented; unlike either iteration of Alienstock, this event has a detailed schedule composed of speakers versed in ufology — the study of UFOs. George Harris of the Alien Research Center in Hiko, Nevada — a tourist destination some 30 miles from Rachel — is hosting the Basecamp event at the center, which offers “fun, souvenirs, and UFO information.”

Among the planned speakers is documentarian Jeremy Corbell, an exuberant character in the ufology world best known for his film about the infamous Area 51 obsessive and self-proclaimed whistleblower Bob Lazar. Lazar is a fairly private man who claims to have worked for the US government on projects directly tied to extraterrestrials at Area 51; in an entertaining twist, it was actually from a podcast interview that Lazar and Corbell did earlier this year that Matty Roberts found out about Area 51’s complicated history and was inspired to joke about storming the place.

Corbell told Vox that he helped the Alien Research Center’s Harris curate the lineup of self-proclaimed UFO experts who will give talks at Basecamp. The event runs from September 20-21, with day passes costing $51; the schedule boasts some surprising celebrity guests, like Kids in the Hall comic Dave Foley (who will have a discussion with Corbell on, presumably, the existence of aliens Saturday night) and DJ Paul Oakenfold performing a show Friday night. There will also be food trucks, including one featuring an alien-themed menu from Arby’s.

Of all the alien-themed happenings in Nevada this weekend, Basecamp may be the only one that has its proverbial shit together. But no matter where folks end up, remember: This all started because of a very, very silly meme.

What to expect at Trump’s Senate impeachment trial
How Rep. Katie Porter wants to keep Congress’s $500 billion bailout in check
Utilities have a problem: the public wants 100% renewable energy, and quick
New Trump administration rules on sexual assault could keep survivors silent
Flattening the curve isn’t good enough
I met Robert Mugabe in the late 1970s. What he told me still haunts me.