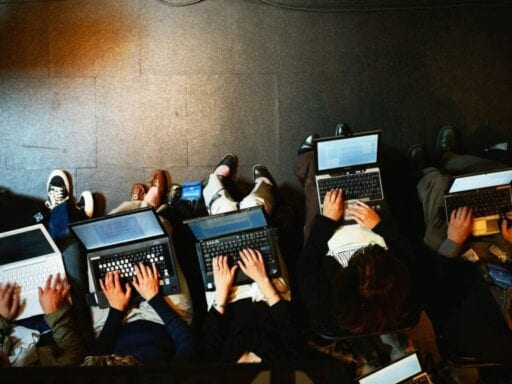 A new study reveals why female journalists are so much less influential on Twitter than men.

Anyone that follows Beltway Twitter knows it’s a deeply insular and self-involved world dominated by men who almost exclusively speak to each other. But now there’s research to prove it.

“When male journalists reply to other beltway journalists, they reply to another male journalist 91.5% of the time,” according to a study to be published in the the International Journal of Press/Politics, titled “Twitter Makes It Worse: Political Journalists, Gendered Echo Chambers, and the Amplification of Gender Bias.”

Of the 25 reporters who received the most replies from male political reporters, zero were women. Full data sets, including names of individual reporters, are available here and here.

(Disclosure: I’ve worked with all of them along the way. Kim, who I edited at Politico, is a dominant Hill reporter, now at the Washington Post, who does not seem to eat or sleep. Gold covered media at a frenetic pace for Politico, where I worked with her on a story or two, and now reports from Europe for CNN. Hunt is one of the best political correspondents on TV, in my expert opinion. She’s works for NBC and was a colleague of mine at Politico in 2011.)

“I’ve never seen statistical significance like this before,” said lead author Nikki Usher, who conducted the study while a professor at George Washington University.

The study includes every reporter (print, digital, radio and television) with a public Twitter account who is credentialed to cover Congress for an English-language outlet, including some British publications, like the Economist and the Guardian.

Congressional hard passes are a decent way to establish a peer group of Washington reporters. News organizations must show they are actual news outlets and individual reporters must demonstrate they are actual journalists. And the list is public, unlike at the White House. Though White House reporters are also typically credentialed in Congress, too.

In all, researchers looked at the accounts of 2,292 journalists, 57 percent of whom were men and 43 percent women.

“If you have a hard pass to cover Congress and a Twitter account and you were current as of start of data collection (June 1, 2017), you’re in our sample,” said Usher, who is transitioning to a professorship at the University of Illinois.

Under Congressional credentialing rules, reporters must live in the Washington area, which is why top political reporters based in other states, like New York, were not included. (Or negligent journalists, like me, who let their passes expire.)

Usher and her co-authors Jesse Holcomb and Justin Littman write that the patterns “suggest that men live in a gendered echo chamber that promotes other male journalists at the expense of female ones.” Women end up, too, in their own gendered silo, tweeting more often with other women, but their corner of Twitter is far less influential.

Overall, women tweet less, which helps explain why women had far fewer followers in aggregate, which the authors say is a significant reason why they are less influential.

Women tweet less for all kinds of valid reasons. As in any industry, there’s the straightforward matter of time for career women with children. And then there’s the platform itself, widely documented as a less-welcoming (at best) place for women.

The authors conclude, “This is not about algorithms, but about the behaviour of journalists, especially male journalists, and structural inequalities in the journalistic profession.”

In a moment when questions about gender and power are erupting in politics, Washington journalism Twitter is important. Not only is #MeToo itself a movement that lives on Twitter, but the platform shapes who is seen as important by influencers in political journalism and whose ideas become the news. It tells us who matters. And right now, women don’t matter much.

Twitter is a fun place for men; a hellscape for women

Men in the study have several advantages on Twitter that build up their stature and legitimacy among journalists, even without the friendly exchanges among themselves:

All three of these differences, the authors argue, give male journalists an upper hand on media Twitter. In particular, followers are important. “If journalists are making an assessment about which of their peers is worth paying attention to on Twitter, this huge gender asymmetry in aggregate followers may well have a disproportionate impact in the perceived legitimacy of their peers,” the authors wrote.

One reason men have more followers is tweet volume. The more you tweet, the more likely you’ll get a retweet, a reply, or a new follower. “Original tweets are the wellspring of engagement and amplification by other Twitter users, and if women tweet less, they will be heard less,” the authors write.

Even men who want to help fix the gender bias against women face a challenge by the fewer tweets: “One can only reply or retweet if one has something to respond to,” the authors write.

There are a number of likely reasons why women tweet less — from the time-crunch many career women face doing double-duty at home to working hard at proving themselves again and again at work (when men do not have to).

But the platform itself is also a factor: it’s a more-hostile place for women than it is for men. Amnesty International looked at how all women are treated on Twitter and went so far as to say the platform violates women’s basic human rights. “Instead of strengthening women’s voices, the violence and abuse many women experience on the platform leads women to self-censor what they post, limit their interactions, and even drives women off Twitter completely.”

I agree with New York magazine’s summary of the study:

To put it more bluntly, Amnesty International published a giant study detailing what most women who actively use Twitter could have already told you: Twitter can be a hostile and dangerous place if you’re not a man.

For women in powerful positions, like media, the situation is worse. A Forbes contributor described a study commissioned by a communications firm of 50 million tweets that 152 powerful women (in business, politics, entertainment, and other prominent fields) received over six months:

Powerful women not only experienced a high volume of online harassment but also broad range of abuse such as, gender specific slurs, attacks on individual intellect and ability, body objectification, sexual harassment and even threats of sexual violence.

When women try to get Twitter to help them out, the company has, historically, not been great. In the case of Maura Quint, a writer for outlets including the New Yorker who submitted a complaint over a dick pic, the company sent her three different responses.

Women even boycotted Twitter when Rose McGowan’s account was suspended after she tweeted about Harvey Weinstein and sexual assault, even though countless women receive threats of sexual violence from men and Twitter does nothing. (There was some back-and-forth about the wisdom of leaving a platform over a woman being silenced, but that’s neither here nor there.)

The authors of the study argue that “the nature of the platform itself, the hostile and toxic environment women face online … and implicit gender bias sets women up to be less represented on the platform, and may well create an even greater structural disadvantage for female journalists, given how this platform is so critical to success in beltway journalism.”

It’s a bit of a mystery why men in media speak almost exclusively to each other. What’s not to like about tweeting with women?

I’m told, anecdotally, some men worry about appearing flirtatious or inappropriate. They don’t want to make a woman feel uncomfortable, either. So they just steer clear. But this act of perceived chivalry (or self preservation) has the same effect as purposeful gender bias.

It’s hard to argue that deciding not to tweet at someone is as bad as male members of Congress opting never to take private meetings with female staff, but it sets women up the same way. When women are excluded from the informal customs that advance careers, they’re left behind. Twitter is fun, it’s jokey, but it’s also where careers are built. “This is how work happens here,” Usher said, describing the significance of Twitter in Washington journalism.

In news, women are behind, too. According to the Women’s Media Center annual report from 2017, men dominated every news platform: They accounted for 74.8 percent of broadcast news, 61.9 percent of newspaper articles, 62.4 percent of wire service copy and 53.9 percent of online news articles. (This data is not specific to political news, but news as a whole.)

We’re used to leaving women out of the conversation.

It’s difficult to say what it means that our political conversation is dominated by men on a platform so hostile to women. My colleague Ezra Klein raised a similar question last year after Mark Halperin of ABC and Leon Wieseltier of the New Republic fell from prominent posts over accusations of sexual misconduct and, for Halperin specifically, sexual assault.

What does it mean that these men — and so many others liked them — held the power to literally shape America’s political narrative? What does it mean, as New York magazine’s Rebecca Traister noted on Twitter, that the story of, say, Hillary Clinton’s public career was told by these sorts of men?

It’s a question still unanswered. And now that we also know men are dominating Twitter, where the #MeToo and #TimesUp movements continue to fuel a cultural awakening around sexual abuse and harassment, to what extent are even those successful movements being stunted?

“Women operate at a disadvantage,” Usher said. “The power to control the dialogue is still in the hands of men.”

Meanwhile, women are building networks among themselves. This instinct isn’t new to women in political journalism, either. The Washington Press Club started out in 1919 as an all-women’s group of six journalists, the alternative to the men’s-only club they couldn’t join. Their founding promotional pitch was simply: “The other day, when a few of us happened to be together, it occurred to us that it might be both pleasant and profitable for the newspaper and magazine women of Washington to have some means of getting together in informal and irregular fashion.”

Ninety-nine years later, on Twitter, women in Washington media are again trying to find a way to get together in an informal fashion and start their own club. But maybe it’s time to say, hey, let us in.

How Islamist militant groups are gaining strength in Africa
Amazon threatened to fire employees who spoke out against its environmental policies
What we know about the officers involved in George Floyd’s death
Mask mandates are crucial for fighting Covid-19. How should they be enforced?
Andrew Cuomo has won himself another term, but his presidential aspirations are dead
Why Senate Democrats just tanked the Republican police reform bill