Study: most wealthy countries aren’t religious. Then there’s the US. 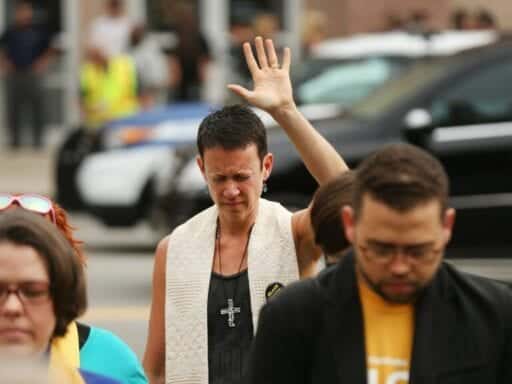 America is the most religious wealthy country in the world, according to a recent survey.

A Pew survey found that Americans said they prayed more than any other wealthy nation surveyed.

Fifty-five percent of Americans report praying at least once daily, 6 percentage points higher than the international average. While this may not seem like a big gap on its own, America is an extreme statistical outlier when it comes to countries with at least a $30,000 per person GDP. In this category, the global average hovers around 40 percent. In Canada, for example, only 25 percent of people pray daily. That number drops to 22 percent in Europe (on average), 18 percent in Australia, and a minuscule 6 percent in Great Britain.

In fact, the study’s authors found, America was the only country out of the 102 surveyed to score higher-than-average on metrics of both religiosity, or the reported frequency of prayer, as well as national wealth, as measured in GDP per capita. By contrast, countries that report daily prayer rate comparable to the United States tend to be poorer, such as Bolivia (56 percent) and Bangladesh (57 percent).

Three years ago, Pew conducted a similar study, in which a comparable percentage of Americans (53 percent) reported that religion was “very important” in their lives. In that study, too, a given country’s answers seemed to track with that country’s wealth. Ethiopia (98 percent), Senegal (97 percent), and Indonesia (95 percent) had the highest percentage of respondents affirming the extreme importance of religion in their lives, while France (14 percent), Japan (11 percent), and China (3 percent) had the lowest.

The idea that a country’s religiosity and its GDP inversely correlate is not a new one. A 2009 Gallup poll, for example, found that among countries with a GDP of less than $2,000 per capita, the median percentage of those who saw religion as important in their lives was 95 percent. When a country’s GDP was above $25,000, that median percentage dropped to 47 percent.

Why? In 2004, sociologists Pippa Norris and Ronald Inglehart came up with the term “religiosity gap” to describe the phenomenon. In their book Sacred and Secular: Religion and Politics Worldwide, they posited that in societies where individuals are more vulnerable, in part as a result of poverty, religion is a stronger force for social and emotional cohesion.

In richer and more stable societies, by contrast, religion became a less necessary force. At the same time, it seems that the reverse is often true: Secularization is frequently a harbinger of economic growth. A study published in Science Advances earlier this year found that increased secularization of a country predicted economic growth, rather than the other way around.

So what makes the United States such an outlier? Pew’s Dalia Fahmy suggests that a useful predictor of religiosity was not simply wealth but wealth inequality. When the Pew data about religiosity is tracked against a country’s relative wealth equality or inequality, rather than GDP, the United States’ religious observance is no longer statistically anomalous. Within the US, states with the greatest income inequality are also those with the highest levels of religious observance.

It’s worth noting, as Christianity Today’s Tobin Grant does, that this doesn’t mean only the poorer members of an unequal society are religious. After all, according to another Pew study, among Americans making under $30,000 a year, an equal percentage (35 percent) report going to a place of worship weekly and never. And among Americans making more than $100,000 a year, the difference between those who attend church weekly (18 percent), infrequently (21 percent), or not at all (19 percent) is extremely minor.

Grant is wary of the idea that religion, therefore, is merely a kind of consolation for the very poor. Rather, he suggests that religion may, at times, enforce and legitimize the status quo for rich and poor alike. “In unequal societies,” he writes, “the rich are also religious. By some measures, the wealthy grow more religious and the poor become less religious where there is higher inequality.”

Certainly, within an American context, religious ideology can seem to justify political or economic complacency. Just think of the prosperity gospel, not uncommon in evangelical circles, which tells believers that wealth is a result of sufficient faith. Or look at Attorney General Jeff Sessions, who famously quoted Romans 13 to justify absolute governmental authority.

While plenty of Christians would argue that neither interpretation does justice to their faith, it’s nonetheless true that there are strains of religious ideology in America that serve to explain, and therefore maintain, the status quo.

But that doesn’t mean, Grant reminds us, that religion itself is the culprit. Rather, he writes, “religions that thrive in unequal societies are likely ones that appeal to the wealthy.”

Can the Senate vote on a replacement for Justice Ginsburg before the election?
Vox Sentences: Who’s in charge in Peru?
Eric Greitens' nonprofit was 'criminal enterprise,' but committee must end: Mo. lawma...
Israel and the UAE just struck a historic peace deal. It’s a big win for Trump.
Vox Sentences: Another migrant crisis in Europe?
A deleted chapter from Malcolm X’s autobiography has resurfaced