Study: Nearly a third of Americans believe a conspiracy theory about the origins of the coronavirus 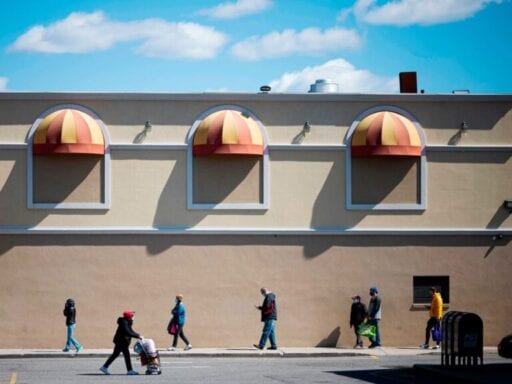 Share
Loading...
People keep social distance as they line up in front of a supermarket in New York City on April 11. | Johannes Eisele/AFP/Getty Images

As the coronavirus pandemic spreads, misinformation is spreading along with it. And one of the most common misunderstandings people have about Covid-19 is where it came from.

While scientists are still researching the virus’s origins, at the moment, experts believe that Covid-19 likely came to humans from bats through an unknown intermediate animal. But a recent Pew study found nearly 30 percent of Americans believe something else — namely, the conspiracy theory that Covid-19 was created by humans in a laboratory. And, nearly a quarter of those surveyed believed humans created Covid-19 intentionally.

The results of the poll may seem startling, but it also reflects just how difficult it’s been to convey accurate information about the pandemic clearly to those who need it the most.

The Pew survey asked 8,914 American adults whether they believed the current strain of the coronavirus “came about naturally, was developed intentionally in a lab, was made accidentally in a lab, or doesn’t really exist.”

Only 43 percent chose “came about naturally,” while 23 percent of those surveyed said the virus was manmade intentionally. Another 6 percent said it was created accidentally, and 1 percent said the virus didn’t actually exist. The survey, which was conducted from March 10 to 16, has a margin of error of 1.6 percentage points.

These sentiments emerged despite a majority of those surveyed — 70 percent — saying that the news media had been covering coronavirus “very well” or “somewhat well.”

That’s a pretty revealing dichotomy. And it suggests that this particular conspiracy theory has infiltrated the news — or that journalists are not doing enough to clearly and convincingly explain what is known about the actual origins of the virus.

The belief that Covid-19 was created by humans stems from speculation by some scientists during the early days of the outbreak that the virus came from a laboratory.

These scientists formed this hypothesis because while most of the earliest Covid-19 patients all frequented the same animal market in Wuhan, China, not all of them had. So some scientists proposed that the origin point could have been a Chinese laboratory where humans were working with bats.

Microbiologist Richard Ebright speculated to the Washington Post that the virus could have passed to humans in a lab accident, “with, for example, an accidental infection of a laboratory worker.” That hypothesis was picked up and published in a number of media outlets, and quickly echoed by some government officials, including members of British Prime Minister Boris Johnson’s administration.

There was never any real scientific evidence to support this belief, which seems to have been bolstered by the proximity of a branch of the Chinese Center for Disease Control and Prevention to the Wuhan animal market, and not much else. The scientific consensus was always that the virus came to humans by way of natural contact with animal hosts. But the idea spread anyway. As it spread, it formed a variant strand: a conspiracy that the virus not only came from a lab, but was created there.

Vox’s Eliza Barclay thoroughly debunked this conspiracy theory in March, noting how widely it had spread among right-wing pundits like Rush Limbaugh, and how Chinese media outlets were working to debunk it. Its popularity among the right-wing was arguably part of the ongoing wave of xenophobia directed at China in the wake of the outbreak. Another version of the theory, which was subsequently voiced by at least one Chinese official, held that the virus came from a lab in the United States.

Regardless of which country these conspiracy theories favor, it’s telling that variants of it have appeared alongside actual verified facts about the virus, often given voice by both media outlets and authority figures. It can be difficult to vet information in a time of crisis and rapidly unfolding news developments, and fake news about Covid-19 has circulated widely.

A more complicated factor in the spread of false beliefs in the US is the role the Trump administration itself has played in alternately downplaying, undermining, and rebuking efforts to take the pandemic seriously, with Trump himself repeatedly making false or unsubstantiated claims about the virus. As Vox’s German Lopez summed up in March:

[Trump] previously tweeted comparisons to the common flu, which in fact appears to be less deadly and spread less easily than the coronavirus. He called concerns about the virus a “hoax.” He said on national television that, based on nothing more than a self-admitted “hunch,” the death rate of the disease is much lower than public health officials projected. And in February, he said of the coronavirus, “One day it’s like a miracle, it will disappear.”

Alongside these kinds of claims, it’s unsurprising that right-wing media supportive of the president has also downplayed the seriousness of the virus. This, however, has had consequences. A March poll found that a majority of Fox News viewers think coronavirus fears are exaggerated. It’s the kind of news environment in which conspiracy theories flourish.

But this sort of misinformation can have deadly results.

According to Pew, respondents with a high school diploma or less education, as well as respondents identifying as black and Latinx, were more likely to believe humans made Covid-19. Given the systemically unequal, sometimes horrifically racist history of health care in the US, it’s little wonder that minorities might distrust the things scientists and health officials tell them about the virus.

But this systemic inequality, combined with inadequate government preparation and protection, means that these are the populations which are most likely to die from exposure to the virus. For example, as of April 11, 41 percent of Michigan’s Covid-19 related deaths were of black people, despite being 14 percent of that state’s population.

The poor, the working class, and minorities are all more likely to have unequal and intermittent access to health care and health insurance, to have underlying health conditions, to be located in danger zones where air pollution might be spreading the virus, and to work jobs that put them at increased risk of exposure.

All of these factors mean the Pew survey isn’t just revealing conspiracy theories: It’s saying that those who believe misinformation about the virus are also the people most likely to be harmed by the pandemic.

It says that despite most people trusting media to deliver them accurate facts, those most vulnerable to Covid-19 still aren’t getting all the information they need. This is particularly concerning given skepticism over coronavirus has already wreaked havoc on some states’ efforts to battle the pandemic, and because limiting the spread of the virus requires not just government action, but action on the individual level. And that is why it is incumbent on the media to get accurate information out — about how the virus started, and about how to curb it. Because making sure people have access to the clearest, most correct, up-to-date information is literally a matter of life or death.

Targeted ads can be more than annoying — they can have mental health consequences
Does Congress need to approve any military action against Iran? Republicans aren’t so sure.
George Floyd’s death set off uprisings across the country
Trump wants to call Mexican drug cartels “terrorist organizations”
Louisiana’s longest-serving incarcerated woman is supposed to be free. Instead, she has Covid-19.
Twitter took down a Trump campaign video over copyright concerns