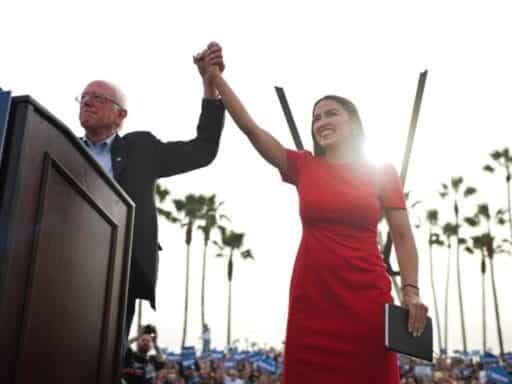 The wine cave controversy is far from over as Warren and Sanders work to emphasize their commitment to small dollar fundraising.

At a campaign rally for Sen. Bernie Sanders in Venice, California on Saturday, Rep. Alexandria Ocasio-Cortez proudly championed Sanders’s refusal to take money from billionaires, saying, “For anyone who accuses us for instituting purity tests, it’s called having values. It’s called giving a damn.”

And on Saturday night in Cedar Rapids, Iowa, Sen. Elizabeth Warren explained to reporters why she has sworn off high dollar fundraisers despite having held them as candidate for the Senate — an issue that was raised during the sixth Democratic debate on Thursday.

“I saw how this system works,” Warren said in Iowa. “And I decided when I got in the presidential race that I wanted to do better than that.”

The comments marked the continuation of that debate’s tense exchange about how the current Democratic frontrunners — Warren, Sanders, Mayor Pete Buttigieg, and former Vice President Joe Biden — fundraise. And they highlight how the question of what kind of voters fuel a candidate’s campaign is becoming an increasingly clear point of differentiation between progressive 2020 candidates and more moderate ones.

The progressive wing of the 2020 candidates — represented by Warren and Sanders — argue that money in politics has an inherently corrupting effect that excludes those without great financial means from the political process. Moderates — represented by Buttigieg and former Vice President Joe Biden — believe that having laxer guidelines for donations is a political necessity not inherently at odds with good governance.

During Thursday’s debate, for instance, Buttigieg pointed out that respected Democratic leaders like President Barack Obama and House Speaker Nancy Pelosi have utilized high dollar fundraisers. But Saturday, Ocasio-Cortez pushed back against Buttigieg’s stance by telling a story that also seemed to underscore his lack of Washington experience.

“I go into work all the time and I hear people saying, ‘What will my donors think?’” she said. “I see that billionaires get members of Congress on speed dial and waitresses don’t, okay? There’s a difference.”

When Sanders took the stage after Ocasio-Cortez, he echoed this point: “We don’t have a super PAC,” Sanders said. “We don’t want a super PAC. We don’t go to rich people’s wine caves.”

Those wine caves were at the center of Thursday’s argument over fundraising, one that as Vox’s Ella Nilsen explained, had been building for some time.

In early December, Buttigieg held a high dollar fundraiser at the Hall Rutherford wine caves in Napa Valley. The fundraiser was exceptionally ritzy. The property owner and event host are billionaires; the chandelier hanging over the wine hall was adorned with 1,500 Swarovski crystals; people who spent $2,800 got access to a “a co-host dinner with Buttigieg.” The event was only partially open to the press.

Sanders and Warren signaled their opposition to the fundraiser ahead of the debate, as as Vox’s Ella Nilsen has explained, which led Buttigieg to complain he was feeling attacked when Warren brought up her grassroots fundraising Thursday.

Buttigieg followed that complaint by stating he wanted to accept money from supporters all different backgrounds.

“This is our only chance to defeat Donald Trump, he said. “And we shouldn’t try to do it with one hand tied behind our back. The way we will win is to bring everybody to our side in this fight.”

“So, the mayor just recently had a fundraiser that was held in a wine cave, full of crystals, and served $900-a-bottle wine,” Warren responded. “He had promised that every fundraiser he would do would be open-door, but this one was closed-door. We made the decision many years ago that rich people in smoke-filled rooms would not pick the next president of the United States.”

Buttigieg fired back by declaring that he was the only candidate on the debate stage who isn’t a millionaire or a billionaire, and accused Warren of hypocrisy by pointing out that she has has transferred money from her senate campaign — which was funded in part by the big-ticket fundraisers — to her presidential campaign.

Warren has faced criticism over this choice before — and she did, in fact, transfer funds from her senate campaign to her presidential campaign. And Saturday she began to face questions over a 2018 VIP photo reception she held with premium seating for those who gave $2,700 donations and … a souvenir wine bottle for people who gave $1,000.

Now, like Ocasio-Cortez, Warren is arguing she has the experience needed to understand why high dollar fundraising isn’t a good idea.

“I saw how this system works. And I decided when I got in the presidential race that I wanted to do better than that,” she told the press after a town hall on Saturday. “And that’s why I just quit doing it.”

Warren’s comments also illuminate why the issue of the wine caves became such a topic of debate Thursday, and why Ocasio-Cortez, Sanders, and the Massachusetts senator herself are still all talking about this days later. The issue is not the wine caves: it is the system, and how that system affects who gets access to politicians, as Vox’s Ella Nilsen has explained:

Campaign finance reform and getting money out of politics is having a moment in the Democratic Party right now. It did in 2016 as well, when Sanders proved that grassroots, small-dollar donations could power a presidential campaign — even one costing many millions of dollars.

That’s true again in 2020, when all Democratic candidates are forswearing corporate PAC contributions and touting their small-dollar donations. Sanders and Warren in particular boast of their grassroots fundraising prowess, and Buttigieg goes out of his way to mention the 2 million donations he’s received from over 700,000 individuals so far this campaign cycle. But on Thursday, Sanders contrasted the number of billionaires who donated to his campaign (zero) to Biden and Buttigieg’s.

Given Buttigieg’s relatively short path to national renown and the case that he’s always been part of an elite class, not being able to speak more openly about his ties to powerful organizations and donors could be problematic the further along he gets in this race. That’s especially the case given that the Democratic base is increasingly skeptical, if not outright adversarial, toward the wealthy and privileged class in the United States.

Beyond the ideological debate the wine caves represent, the issue also is a strategic opportunity for both Warren and Buttigieg to increase their bases of support.

Buttigieg is facing attacks over his campaign finance practices at a moment in which he has strong leads in the early states of Iowa and New Hampshire according to polls. He also has soft support according to many of those same polls, which suggest most voters — both in early states and at the national level — have yet to definitively settle on a candidate.

Vox Sentences: Trump will “maintain family unity” by jailing children with parents
Many technologies needed to solve the climate crisis are nowhere near ready
The war for the Amazon’s most valuable trees
What’s going on with TikTok, China, and the US government?
Coronavirus: News and updates on new cases and its spread
How Donald Trump is using Facebook to amplify his fight against impeachment