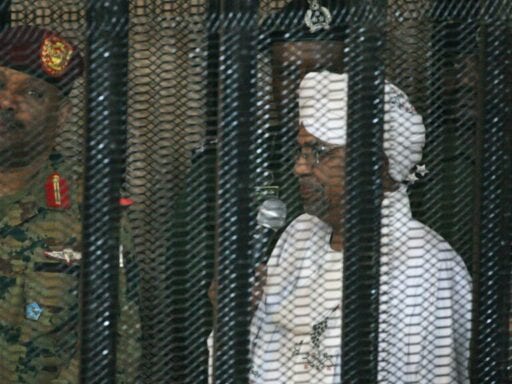 A stunning — but uncertain — moment for Sudan.

Omar al-Bashir ruled Sudan for 30 years, overseeing a bloody and oppressive regime. On Monday, his corruption trial began — a symbol of Sudan’s extraordinary, if shaky, political transition toward democracy.

Ahead of its deposed leader appearing in court, on Saturday Sudan’s military and civil leaders formally signed a power-sharing deal that’s intended to bring democratic elections to the country in three years.

It’s a remarkable moment for Sudan, a country scarred by dictatorship and civil war. Al-Bashir took power in a 1989 coup and maintained his grip on the country for 30 years despite international pressure over Sudan’s support of terrorism and perpetration of genocide in the Darfur region.

The Sudanese had protested their government before, but had not succeeded in putting lasting pressure on the government — until this year. Demonstrations began in December 2018 after al-Bashir ended government fuel and wheat subsidies, causing gas shortages and a spike in food prices.

The protests turned into an outlet for people’s broader frustration and fury with al-Bashir, and transformed into a more organized political movement, led by professionals, students, and women and fueled by social media. The sustained challenge to al-Bashir’s government led to his downfall in April.

The Sudanese military took over, but protesters continued to demand a full democracy. After months of negotiations — which were nearly sidelined by the military’s brutal crackdowns against protesters — the military and the civilian leadership reached a preliminary deal in July, which they finalized this weekend.

The power-sharing deal isn’t quite a democracy, but it’s supposed to pave the way for future elections. The Transitional Military Council (TMC) — the armed forces that have ruled Sudan since the coup that forced out al-Bashir in April — and the Alliance for Freedom and Change, the umbrella organization representing the pro-democracy protesters, will lead the country jointly through an 11-member sovereign council. The council will collectively act as the head of state, with power split among five civilian leaders and five members of Sudan’s armed forces.

Both the civilian and military leadership will jointly select a civilian as the 11th leader. The military will lead the council for the first 21 months, followed by a civilian leader for the next 18 months, in preparation for democratic elections in 2022.

A prime minister will also be selected by the sovereign council, nominated by the civilians represented by the Alliance for Freedom and Change. The new prime minister will effectively be in charge of the bureaucracy, made up of about 20 cabinet ministries. Abdalla Hamdok, an economist who’s worked in international organizations, including the United Nations, has been nominated as Sudan’s prime minister and is expected to take office September 1.

The power-sharing deal also enshrines certain rights, including the right to freedom of expression and assembly. It also plans for the creation of a legislative body, with two-thirds of the seats going to the Alliance for Freedom and Change.

But questions remain about the power-sharing arrangement, even as celebrations erupted as Sudan finalized the deal this weekend.

Activists and experts I spoke to back in July worried about the role of the military in the new government and feared that their influence would stymie reform and accountability. Other concerns, including the lack of female representation, persist. And the new government doesn’t instantly change the other challenges Sudan faces, from a depleted economy to continued conflict in many regions, including South Kordofan and the Blue Nile.

This is still a remarkable moment for Sudan, even if the country’s political future is uncertain. Almost nine months since the protests began, the country has signed this power-sharing deal — and al-Bashir is locked in a defendant’s cage in a Sudanese courtroom.

Deposed President Omar Al-Bashir at the first day of his trial today. pic.twitter.com/FAM45zYR42

On Saturday, representatives of the military and civilian leadership inked the power-sharing agreement that will chart Sudan’s new political future. Lt. Gen. Mohamed Hamdan Dagalo, often known as “Hemeti,” and Gen. Abdel Fattah al-Burhan signed the agreement on behalf of the military; Ahmed al-Rabie signed on behalf of the protesters represented by the Alliance for Freedom in Change.

The military officials who signed the deal will be intimately involved in the new government; Al-Burhan will lead the sovereign council for the first 21 months on behalf of the military. Hemeti, his current deputy, will also serve on the council.

Hemeti, a former ally of al-Bashir, has been implicated (though not formally charged) in human rights atrocities in Darfur, and he’s the head of the Rapid Support Forces (RSF), a powerful paramilitary group that’s tied to brutal crackdowns on protesters, including one in early June that left at least 100 dead. The RSF has continued to use force against protesters, even after the draft power-sharing agreement was reached in July. Late last month, the RSF fired on student protesters, killing five teenagers, the youngest being just 14.

Hemeti’s continued presence in government has worried activists and experts, as he’s largely seen as having even more influence than al-Burhan. Hemeti told the BBC this week that “as responsible people we will implement all the demands that have been agreed to the letter.”

“On the face of it, the agreement is a formality,” Hemeti added, “but even if we did not have any agreement, we should implement the demands because this serves the interest of the country. We have no vested interests, therefore, we must commit to the agreement, implement and support it.”

Still, the sovereign council is set up so the military largely has control in that critical 21-month period, including over the defense and interior ministries. It also makes the possibility of real reconciliation or accountability for past atrocities — including the protester crackdown in June — difficult, despite protesters’ desire to see a truly independent investigation. Some also fear that after 21 months, the military might just refuse to cede power back to civilians.

“It’s a very tough compromise,” Sara Abdelgalil of the Sudanese Professionals Association, which helped organize the protests, told the New York Times. “We just hope that we will achieve a civilian-led government at the end of the three years. And if we fail, we will go back to the street.”

Some also objected to the lack of women in the new sovereign government. The Alliance for Freedom and Change has promised that one of its five representatives will be a woman, but none participated in the signing ceremony.

Women helped lead the months-long protests that brought down al-Bashir, often doing so despite the risks — specifically sexual violence and rape that occurred during the crackdowns. The viral image of Alaa Salah, a 22-year-old Sudanese woman and student, standing atop a car, wearing traditional Sudanese dress and rallying protesters, became a symbol of the women-led demonstrations.

“For the 1st tangible political progress of decades to exclude women is ridiculous,” Yousra Elbagir, a foreign reporter for Channel 4 News, tweeted. She added that “women were the reason that the mass pro-democracy sit-in was able to continue for nearly two months. They ran make-shift clinics, fed fasting protesters daily during Ramadan, they spent the night at check points searching female protesters.”

The signing of the power-sharing accord coincided with the start of al-Bashir’s trial for corruption. It’s a remarkable image: the ruthless dictator diminished, inside a metal cage, guarded by the people he once commanded. When asked at the start of trial to confirm his residence, the 75-year-old replied: “formerly the airport district, at army headquarters but now Kobar prison.”

Al-Bashir is facing graft charges, specifically illicit possession of foreign currency and accepting gifts in an unofficial manner. At the trial, a detective testified that al-Bashir admitted to receiving $90 million from Saudi Arabia’s de facto leader Mohammed bin Salman and, before that, its now-deceased leader King Abdullah. Detectives testified to finding about $8 million in cash (in the form of euros) in his residence after the coup.

Al-Bashir’s 100-strong legal team have said the former leader is innocent and that the money doesn’t count because it was found after al-Bashir was no longer in power.

Saudi Arabia and the United Arab Emirates have long had ties to Sudan and have used child soldiers from the country to wage its war in Yemen. But those two countries have become even more aggressive in trying to exert their influence after the ouster of al-Bashir, closely backing the military to preserve their influence. Protesters fear attempts by the wealthy Gulf States to meddle and help suppress the democracy in Sudan, and the trial’s revelations will do little to tamp down those concerns.

Besides these brazen charges of graft against al-Bashir, many protesters want to see the former dictator held accountable for more serious crimes. Sudanese prosecutors have now opened other investigations into al-Bashir, including money laundering, financing “terrorism,” and “ordering the killing of protesters,” according to Al Jazeera, the last of which could carry the penalty of death.

But it still looks unlikely that al-Bashir will face war crimes charges for his role in carrying out genocide in Darfur. From 2003 to 2008, to fight insurgency in that region, he relied on pro-government militias — known collectively as the “Janjaweed” — who carried out heinous atrocities, burning villages and murdering civilians. (UN estimates say about 300,000 people were killed.) Al-Bashir was charged by the International Criminal Court for overseeing the genocide in Darfur, effectively making him persona non grata on the international stage.

The International Criminal Court (ICC), which is based in the Hague, Netherlands, has had arrest warrants out for al-Bashir since 2009. The court does not have any way to actually arrest suspected war criminals on its own and must instead rely on individual countries to execute any arrest warrants. After the coup, there was some hope that al-Bashir might finally be extradited, though the Sudanese military quickly quashed that idea.

Some groups, including Amnesty International, are still lobbying for Sudan to extradite al-Bashir to the Hague. And, at least for now, al-Bashir doesn’t face war crimes charges within Sudan.

Still, al-Bashir just being in a courtroom is an incredible development, given how long the authoritarian retained his grip on power and acted with impunity. His trial is also the first test for an independent judiciary under Sudan’s new government structure.

Together, the new power-sharing accord and al-Bashir’s charges represent Sudan’s nascent political transition. The country has a chance for democracy, but the process looks to be slow and very uncertain.

Mike Pompeo undermined America’s democracy in one press conference
Trump’s last rally as president was supposed to be about the Georgia runoffs. It wasn’t.
This Covid-19 mystery will help determine when the pandemic ends
Andrew Cuomo is reportedly trying to get Amazon to come back to NYC
Congress takes up the fight for the future of the Postal Service
A taxonomy of Gen Z selfie poses