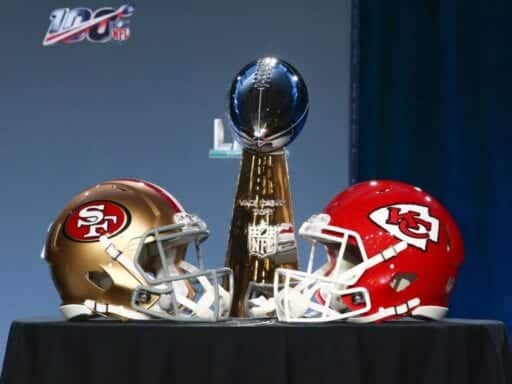 The 49ers and the Chiefs face off at Hard Rock Stadium in Miami, Florida, on Sunday, February 2.

On Sunday, February 2, at 6:30 pm ET, the San Francisco 49ers and the Kansas City Chiefs will face off at Hard Rock Stadium in Miami, Florida. Super Bowl 54 (or LIV, if you prefer the NFL’s anachronistic devotion to Roman numerals) sees the clash of two storied franchises — neither of which have won the league’s biggest prize in decades.

For sports fans, there are some appealing story lines: The Chiefs have a dynamic, young quarterback, Patrick Mahomes, who leads a high-flying offense and may soon break records as the most highly paid player in the sport. He’ll go up against Jimmy Garoppolo (once Tom Brady’s backup) and the run-heavy, defensive-minded 49ers. Oddsmakers give the Chiefs a slight edge to win.

For those more inclined to the halftime show, this one’s a treat: Jennifer Lopez and Shakira co-headline the performance, and both have promised a celebration of Latin culture — appropriate given the Miami venue. Demi Lovato will sing the national anthem.

As for the Super Bowl commercials, we’ve already seen a bit of drama, with the much touted death of Mr. Peanut being (partially) canceled out of sensitivity in the wake of Kobe Bryant’s death. Otherwise, expect the usual glut of celebrity cameos, Facebook trying to win back your good graces, and big brands trying to glom onto millennial trends. Oh, and if you were hoping for at least one night without the specter of politics or the 2020 election — sorry: Both Mike Bloomberg and Donald Trump have bought $10 million ads.

The EPA’s bizarre justification for rolling back fuel efficiency standards
Hey, older TV fans: networks just might start caring about you again!
QAnon: The conspiracy theory embraced by Trump, several politicians, and some American moms
Trump spent his holidays retweeting QAnon and Pizzagate accounts
On second thought, maybe the Oscars do need a host
Why nearly 8,000 Marriott workers are striking in 8 cities