Superstore is the next Great American Sitcom 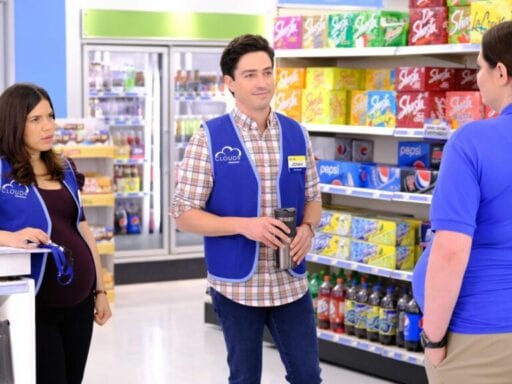 It balances big themes with smaller stories and great jokes just about perfectly.

What is “The Great American Sitcom”?

Never mind that it’s not really an established construct; indeed, I just made it up. But it’s an interesting question to think about in the vein of the Great American Novel — a book so understanding of America’s soul that it bypasses the intellect and burrows straight into the heart of the country. Just about any popular, acclaimed book written by an American author has been called the Great American Novel at one time or another, but popular candidates include Melville’s Moby-Dick, Twain’s The Adventures of Huckleberry Finn, Fitzgerald’s The Great Gatsby, and Ellison’s Invisible Man.

And yet the idea of the Great American Novel is also that there can never be a Great American Novel, because every book eventually becomes limited by the understanding of its author. Sooner or later, you bump up against something they just don’t understand about the country, and you have to go looking for thoughts on that topic or theme in another book.

The Great Gatsby is my favorite book ever written, for instance, but good luck finding any thoughtful dissection of America’s fraught relationship with race and racism, an enormously important part of the country’s history. It’s just not in there.

Anyway, if we apply this rubric to sitcoms — an American artform that we sometimes try to pretend isn’t an artform — it’s a lot harder to find shows that fit, because sitcoms are so dedicated to assuring us that everything will be just fine. Still, some solid candidates exist. All in the Family, certainly, for its understanding of American political conflict. Cheers, I think, for how deeply it grasps the country’s uneasy relationship with failure. The Simpsons, surely.

And now, though it’s still early in its run, I would think about adding Superstore to the list.

Superstore’s season 4 premiere combines everything the show does well in one tidy, 22-minute package

What gives me pause about declaring Superstore a potential Great American Sitcom is how badly it clearly wants to be one. In nearly every episode, it tackles some important issue or idea of the day, in a way that makes it feel vital in its best episodes and grasping beyond its reach in its worst.

But beyond occasional clunkiness, tying a show’s storyline to whatever’s in the news at the moment can end up hopelessly dating the series. All in the Family, for instance, mostly survives on the strength of its character relationships, not because the Bunker family’s battles with inflation still feel relevant 40 years later.

With that said, “Back to School” illustrates how Superstore avoids overloading on the sorts of “timely” elements that might otherwise hurt its legacy. It is, very loosely, an episode about coworkers navigating workplace relationships and flirting in a world where the #MeToo movement has exposed a lot of the dark power imbalances that exist across nearly all industries, especially (but not limited to) those between men and women.

What keeps the episode from feeling didactic, however, is the way Superstore’s characters genuinely don’t know how to apply the #MeToo movement to what happened at the end of season three, when the series’ main will-they/won’t-they couple, Amy (America Ferrera) and Jonah (Ben Feldman), hooked up — but in front of a camera they didn’t realize was streaming their hookup to the entire workforce of Cloud 9 department stores worldwide.

The sex was consensual; nobody doubts that, because they, uh, saw how consensual it was. But Amy is Jonah’s superior, and there’s an inherent power imbalance there that no one is sure how to navigate. What’s more, Amy is pregnant with her ex-husband’s child, Jonah used to date a coworker, and their fellow Cloud 9 employees treat the two of them very differently when they come back to work post-hookup. There are all sorts of minefields to tiptoe through — personally, professionally, and ethically. But Jonah and Amy insist their tryst was a one-time thing, a stupid mistake they won’t repeat for fear of losing their jobs.

One of the smartest choices Superstore makes here is to have Jonah and Amy return to Cloud 9 after several months away, because they were both suspended for their behavior (their punishment lasted roughly the entire summer — funny how that works out). Thus, their hookup has become a piece of store gossip and rumor that has only festered in their absence.

When Jonah comes back, the guys in the store joke about what happened. But Amy can’t seem to find a way to joke about it with the store’s women, to let the water slip under the bridge. The disparity, she concludes, is a sign of how women and men are socialized to process things differently when it comes to sex — women to be ashamed and men to be at least a little proud.

This double standard is another subtle way Superstore removes itself from the present and makes itself more timeless. The differences in socialization between men and women run far deeper than even the patriarchal structure of America (though the two are, of course, interlinked), and they’ll probably remain long after anybody involved in the show is gone. By nodding toward them, Superstore casts a line out to the future — to anybody who might be listening 40 or 50 years from now, and who might find themselves nodding at how an old sitcom managed to understand their situation so many years in the future.

That’s what makes Superstore such an effective Great American Sitcom candidate. Though it tackles timely issues, it always uses them to dig deeper into the interpersonal dynamics of the characters in the store (especially as they apply to Jonah and/or Amy) and into what those issues say about the broken systems that human beings have constructed to live within.

Lest Superstore sound too much like homework, let me assure you that every episode is also damned funny, especially when all of the characters gather in the backrooms of the store to discuss whatever is happening that week. It’s in those moments — when their various personalities bounce off of each other at length — really shine.

And on top of that, Superstore is just a beautifully plotted show. When the end of “Back to School” arrives — and with it the revelation that Amy and Jonah have been dating in secret all this time and intend to keep doing so — it serves as a reminder that this comedy can play a long game as well as any other show on TV.

What Superstore does isn’t particularly flashy, but maybe it doesn’t need to be. Maybe the Great American Sitcom is just a show that’s incredibly well put together.

New polls show Ted Cruz could really lose in 2018
All the movie and TV trailers that aired during the Super Bowl
Live results for the South Carolina Democratic primary
There have now been 50 million confirmed cases of Covid-19 worldwide
I treat teens who attempted suicide. Here’s what they told me.
What Alexander Hamilton has to do with the EU’s $850 billion coronavirus stimulus plan