Support for impeachment isn’t as high in battleground districts 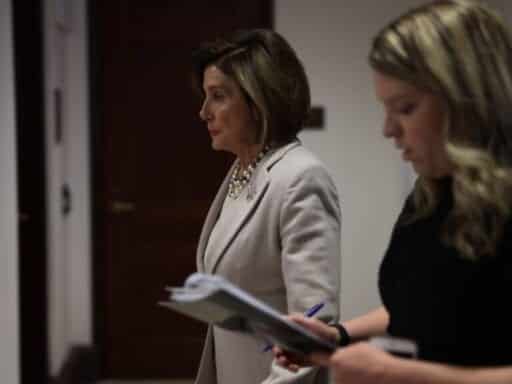 Share
Loading...
US House Speaker Nancy Pelosi (D-CA) arrives for a closed session before the House Intelligence, Foreign Affairs and Oversight committees on October 17, 2019, at the US Capitol in Washington, DC.  | Alex Wong/Getty Images

Backing for an impeachment inquiry is growing nationally — but polling is tighter in battleground districts.

The majority of Americans now support impeachment, according to a slew of recent polls from Pew, Gallup and Fox News. But based on an internal memo from House Democrats’ campaign arm, the margins are much closer in battleground districts.

The Democratic Congressional Campaign Committee memo, obtained by Axios’ Alexi McCammond, highlights a notable difference in how impeachment is currently playing out nationally and in competitive House districts, including those that Democrats flipped in 2018.

At a national level, voters support a Democrat who backs the impeachment inquiry by 11 points over a Republican who does not, the memo notes. In 57 battleground districts the party has identified, voters still support the impeachment inquiry — but only by a 1-point margin, 49 percent in favor versus 48 percent opposed. The memo adds that Democrats are still leading in the generic ballot by three points, on average, in those same districts. (These include districts that Democrats retook from Republicans last cycle in places like Iowa, Virginia, and Southern California.)

House Democrats had been hesitant to pursue an impeachment inquiry largely because of how it could potentially endanger members who are in more moderate districts during the upcoming election. But a whistleblower complaint about a July phone call when Trump pressed Ukrainian President Volodymyr Zelensky to dig up dirt on Hunter Biden, a son of his 2020 rival, has since spurred Democrats to formally kickstart an inquiry.

The DCCC’s memo offers one snapshot of how Democrats’ message is resonating, though it’s worth noting that it’s just one source of polling in these districts. As more polls are conducted specifically in battleground areas, a more complete picture about how impeachment is being received could emerge.

Support for impeachment is trending stronger and stronger nationally

Much of the polling that’s taken place thus far has focused on the national response to impeachment, which has seen an uptick in support since House Speaker Nancy Pelosi formally announced the start of an inquiry in September. As captured by a 538 polling aggregation, backing for impeachment has grown from 40.1 percent to 49.5 percent since late September, driven largely by shifts from Democrats and some independents.

Polls have also asked the impeachment question a couple different ways. While some have focused on support for the inquiry, others have asked voters whether they think Trump should be removed from office. At this point, there’s been stronger support for an inquiry than definitive removal of the president. According to an NBC News/Wall Street Journal poll out this week, 55 percent of people supported an impeachment inquiry while just 24 percent felt there was enough information to impeach and remove the president right now.

While it’s still too early to say how impeachment will wind up affecting the 2020 election, the momentum in the short term appears to bode favorably for the Democrats. As they continue to make their case, it’s possible that public sentiment will reflect the increased focus on this subject.

The right way to play Monopoly
The police shooting of Jacob Blake, a Black Wisconsin father, explained
Twitter bans Ilhan Omar’s GOP rival for tweeting about hanging the congresswoman
Where every 2020 candidate stands on guns
This could be the blueprint for LGBTQ protections in the South
The coronavirus has now killed more Americans than the 9/11 terror attacks