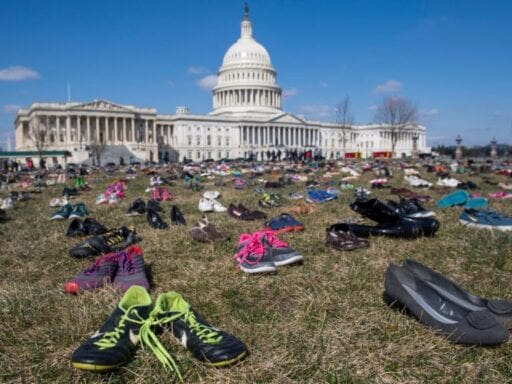 Share
Loading...
The US Capitol lawn is covered with thousands of pairs of empty shoes to memorialize the children killed by gun violence since the Sandy Hook school shooting, in a display organized by the global advocacy group Avaaz in 2018. | Saul Loeb/AFP/Getty Images

The lawsuit could send a message to the gun industry.

The US Supreme Court on Tuesday declined to hear an appeal on a lawsuit against a major gun manufacturer, effectively allowing the families of victims of the 2012 Sandy Hook Elementary School shooting in Newtown, Connecticut, to sue firearms maker Remington Arms.

Remington appealed the Connecticut Supreme Court’s decision in March to let the lawsuit proceed, but the US Supreme Court declined to hear the motion. The federal justices didn’t offer any explanation for their decision, Bill Chappell reported for NPR.

The families argue that Remington violated Connecticut law when it “knowingly marketed and promoted the Bushmaster XM15-E2S rifle for use in assaults against human beings.” They argue that the AR-15–style rifle, which a shooter used to kill 26 people at Sandy Hook Elementary School in December 2012, was marketed to emphasize its capabilities in war and even to promote its use by a lone gunman. As one ad put it: “Forces of opposition, bow down. You are single-handedly outnumbered.”

The 2005 Protection of Lawful Commerce in Arms Act (PLCAA) gives gun makers and dealers sweeping legal protections from lawsuits. The law was supported by the National Rifle Association and other gun rights advocates to prevent lawsuits that, they feared, could help cripple the firearms industry.

Prior to this legislation, lawsuits against the gun industry had generally failed — but the industry was worried one would eventually break through, and expose industry secrets that could make manufacturers and sellers look bad, including connections to illegal trafficking. Since the law passed, it has been repeatedly cited by courts to dismiss litigation against the gun industry.

But the families behind the lawsuit pointed to exceptions to legal protections in the PLCAA, including for gun makers and dealers that violate state marketing laws. The families argued their lawsuit fell within the exceptions, so they could sue Remington for what they described as irresponsible marketing.

A lower court in Connecticut wasn’t persuaded, originally dismissing the lawsuit. But the state Supreme Court ruled the exceptions in the PLCAA were enough to let the lawsuit continue.

Remington argued the Connecticut Supreme Court interpreted the exceptions too broadly, and appealed its case to the US Supreme Court. Now that the appeal has failed, the lawsuit will proceed in the lower courts.

The suit is meant to hold the gun industry accountable, and send a message that may encourage a few more checks, on the manufacturers’ or sellers’ part, to marketing and selling firearms.

More broadly, gun control advocates have pushed to ban assault weapons. The research suggests such a ban would not have a significant impact on overall gun violence, because most US gun violence is carried out with handguns, but experts say that such a ban may reduce the overall deadliness of mass shootings, like the one in Sandy Hook.

With Congress unlikely to pass an assault weapons ban anytime soon, some victims of mass shootings are turning to litigation against the companies who made the weapons.

“Leave no vacancy behind”: Mitch McConnell remains laser-focused on judges amid coronavirus
Is your phone or Fitbit the future of medical diagnosis?
Ben & Jerry’s is donating a total of $100,000 to 4 progressive causes
3 ways to make the Iowa caucuses less influential
Joe Biden’s stutter and Sarah Sanders’s terrible response to it, briefly explained
Climate change lawsuits are not going away