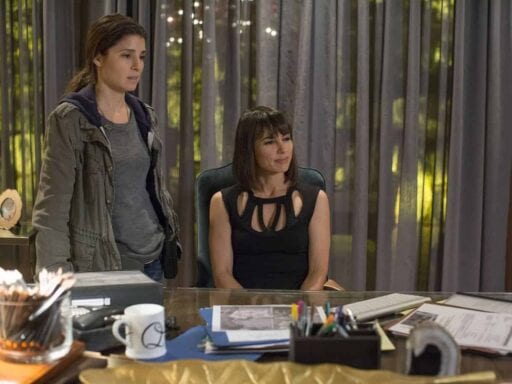 The final season features an “All-Star” version of UnReal’s show-within-a-show.

For anyone in need of a show to binge right now, the fourth — and now final — season of UnReal has just dropped on Hulu. It’s been a long journey to get the season to the screen, as it completed production before UnReal’s third season aired.

The series, which originally aired on Lifetime, is now streaming in its entirety on Hulu as part of a deal between Hulu and UnReal’s production company, A+E Studios. As Deadline reported in May, when the move to Hulu was first announced, UnReal was a popular show for binge-watching and more successful on digital viewing platforms than in airing week-to-week on TV, hence the move to streaming for season four.

All eight episodes of season four have now been officially released on Hulu, in a surprise drop that brings together the new season with the three previous ones that were already available to stream on the service. “When the opportunity to partner with Hulu arose, we immediately saw the huge benefit to UnReal’s’s loyal fans, as well as a unique way of recruiting first-time viewers to this ground-breaking series,” said A+E Studios executive Barry Jossen in a press release announcing the release of the new season.

Additionally, though there was some speculation that the series might be renewed for another season should it perform well on streaming, Hulu and A+E Studios have confirmed that season four will be UnReal’s last season.

UnReal, which stars Shiri Appleby and Constance Zimmer, centers on the production of a Bachelor-style reality show. The first season was well-received, garnering two Emmy nominations (Best Dramatic Writing for Marti Noxon and Sarah Gertrude Shapiro, and Best Supporting Actress in a Drama for Zimmer) as well as a Peabody Award, but went through something of a sophomore slump.

The new rules of sex — in the pandemic
Vox Sentences: Emmett Till might get justice in the end
Trump's 'zero tolerance' immigration policy sparks outrage in Central America
A fake Tom Ford quote about Melania Trump is going viral on Twitter
The Filipino neighborhood San Francisco destroyed
The Vox Book Club pick for May is Donna Tartt’s The Secret History