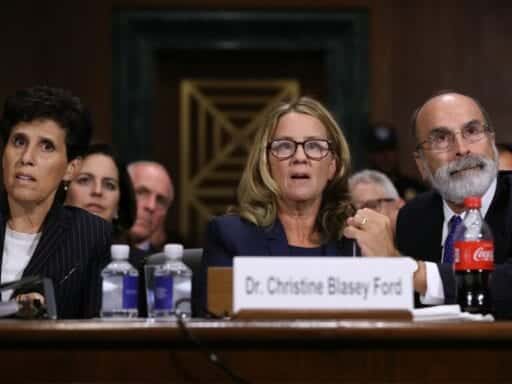 The Wall Street Journal’s editorial board applauded Sen. Susan Collins (R-ME) for deciding to vote for Supreme Court nominee Brett Kavanaugh with what appears to be a joke about sexual consent. Really.

“Susan Collins Consents” reads the headline of the editorial, which WSJ published on Friday evening after Collins on the Senate floor announced she would indeed vote for Kavanaugh after weeks of deliberation. The text of the editorial makes clear that the “consent” reference is actually tied to the Senate’s role in providing “advice and consent” to the president of the United States on nominations and international treaties.

Still, given the circumstances of Kavanaugh’s nomination — he has been accused of sexual assault by one woman and sexual misconduct by another, accusations he has vehemently denied — the headline is, at the very least, in extremely poor taste. It’s a rape joke.

Palo Alto University professor Christine Blasey Ford alleges that while they were at a high school party in the 1980s, Kavanaugh drunkenly pinned her down, tried to take off her clothes, and covered her mouth as she screamed as one of his friends, Mark Judge, looked on. She didn’t consent to that. Deborah Ramirez claims that Kavanaugh drunkenly exposed himself to her and thrust his genitals in her face while they were in college. She didn’t consent to that either.

If no one at the Wall Street Journal realized this headline would be problematic, that’s a problem.

The type of consent the editorial board’s editorial goes on to discuss is the Senate’s “advice and consent” role — the constitutionally assigned duty for senators to review and approve federal appointments and treaties — in relation to President Donald Trump in his nomination of Kavanaugh. Collins invoked that while discussing her decision to support Kavanaugh on Friday, saying that the Senate’s process was “thrown into a tailspin” after the allegations against Kavanaugh came to light.

“The presumption of innocence is relevant to the advice and consent function when an accusation departs from a nominee’s otherwise exemplary record,” Collins said.

In short, the speech was a U.S. Senator weighing a nominee’s objective, known record against her own beliefs and politics. This, presumably, is the practical meaning of advice and consent.

Any observer of the events of the past four weeks is aware that the Kavanaugh nomination process broke free of those traditional advice-and-consent boundaries. And so Senator Collins then also addressed the heart of the last-minute controversy over Judge Kavanaugh’s nomination — the accusation of sexual assault made against him by Christine Blasey Ford.

But the editorial isn’t headlined Collins “advises and consents.” The “advice” part is left out.

The internet was quick to notice the apparent double-entendre.

And @WSJ decides to go with a rape joke pic.twitter.com/ooQAtACBz0

It was also quick to damn the paper’s leadership. (Editorials are different than op-eds, which which are opinion pieces written by contributors and reflect the opinions of the individual author. Editorials are written by a newspaper’s board and represent the official institutional position of the paper.)

The Wall Street Journal has not yet responded to the outcry and did not return a request for comment.

The WSJ’s editorial board is full of radicalized extremists. On the other side of a fire wall, they have excellent reporters. Waking up to see their employer publish a rape joke in the midst of this Kanaugh mess has got to have a few of them questioning their life choices.

I thought this headline from a WSJ editorial, now making the rounds on twitter, was a fake one just made for a few social media laughs. But it’s real. Here’s the link: https://t.co/w4fabift6g pic.twitter.com/DulKEmp2uX

Headlines making a play on words about rape would be in poor taste anytime, but it’s a fraught moment for many women and men in America. The Kavanaugh hearings have brought forth a lot of raw emotions about sexual assault and misconduct and the meaning of consent. The #MeToo era has, too.

Perhaps no one who saw the headline before it went out noticed it would be problematic, or if they did, they were overruled. Or they knew it would draw criticism, and they ran it anyway.

Vox Sentences: A Saudi crackdown on women’s rights
YouTube says it’s still trying to fix itself. But it’s not going to stop selling itself to advertise...
We finally have a new US maternal mortality estimate. It’s still terrible.
“It’s embarrassing”: The spotty US tracking of coronavirus mutations
Vulnerable boys and powerful men: the Bryan Singer allegations fit a disturbing pattern
Hurricane Florence caused up to $22 billion in damages. Climate change made the storm worse.