Susan Collins, one of the most important swing votes on Kavanaugh, explained 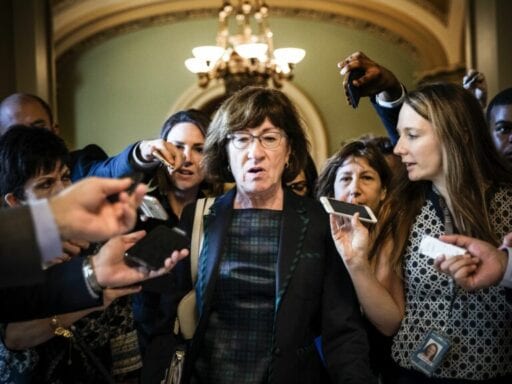 The Maine Republican is one of the few swing votes left for the Supreme Court nominee after Christine Blasey Ford’s testimony.

Diane Russell, a former Democratic state legislator from Maine, sounded almost beside herself as she stood outside the office of Sen. Susan Collins (R-ME) on Friday. She had just shepherded about a dozen sexual assault survivors through Collins’s office to share their stories.

Christine Blasey Ford and Brett Kavanaugh had presented stunning Senate testimony the day before and, fairly or not, Kavanaugh’s confirmation to the Supreme Court largely comes down to two Republican women: Collins and Sen. Lisa Murkowski (R-AK). Nobody else in the mostly white and male GOP conference seems likely to vote against him. Most of them did not even appear to seriously consider it.

“She’s a good person!” Russell said emphatically of the Maine senator. They might disagree on every matter of public policy, she said, but she still believed truly and deeply that Collins must be furious about the allegations against Kavanaugh and how Senate Republicans have handled them.

As the Trump White House and Senate Republican leaders fight desperately to hold GOP senators in line to confirm Kavanaugh, Collins is once again the fulcrum on which the fate of the country rests.

Nobody is sure what Collins is going to do. On Friday afternoon, she joined with Arizona Sen. Jeff Flake’s call for further FBI investigation into the allegations against Kavanaugh before a Senate floor vote is held. But she made no further comment on his nomination or how she would ultimately vote on his confirmation.

Collins is deliberate, she’s reserved, and she never tips her hand. She makes her own choices.

Collins always finds herself in the middle of the Senate’s most potent dramas. She, along with Murkowski and Sen. John McCain, now deceased, was one of the three Republicans to stop Obamacare repeal in its tracks. She became something of a progressive icon, with takes abounding after the vote that it was truly the two women senators who had made McCain’s unforgettable thumbs-down possible.

Progressives hoped to replicate the success on the Republican tax bill, but Collins ultimately became a final swing vote in favor of it.

Russell, who served eight years in the Maine House and ran for governor this year but garnered little support, isn’t surprised Collins has taken this long to decide what to do. As she stood outside her senator’s office, she was sympathetic to the position Collins found herself in: as one of the few Republican women in the Senate, who bears all the burden in a drama that hinges on very difficult questions about memory, presumptions of innocence, and how victims of assault should be treated.

“She often is the last person to make a choice, and whether she’s genuinely weighing her options and looking at all the facts or if she’s doing that because it’s convenient, that’s not for me to speculate,” Russell said. “What I will say is, I have looked her in the eye, and while we disagree on a whole host of issues, I know from the bottom of my toes she cares deeply about Maine and about women. I am holding out hope she’ll do the right thing.“

So is Tamara Field, a 50-year-old from Portland who had just come down to Washington, DC, on Thursday night. Field told me she is a rape survivor who suffered an attack earlier this summer after meeting a man through an online dating app.

She had said in Collins’s office that she didn’t want her 10-year-old daughter “to live in a world where reporting is a source of shame.” She told me she wants to believe Collins will stop Kavanaugh’s nomination, because the alternative is almost too much to bear.

“If she votes yes, it’s a complete and total betrayal of the women of the state of Maine and the women of America,” Field said. “This isn’t court. The truth is, in a court of law, he would never be convicted. There’s not enough evidence, as in most rape cases. However, he has called this a sham. He has suggested it’s a conspiracy hatched by Democrats.”

“This is a sexual assault allegation,” she continued, “and that’s how he has decided to respond: with anger, with acidity, with ugliness. That alone should convince Sen. Collins he is not fit to sit on any bench.”

I have spoken with current Senate Republican aides, former Senate Democratic staffers, protesters outside Collins’s office, and activists and political observers back in Maine to get a full picture of the lawmaker, who has been in the Senate since 1997. I followed her closely myself during the Obamacare repeal debate.

A few things shone through, no matter what bias people brought with them: Collins has built a reputation of integrity. She genuinely feels strongly about women’s rights. She is deliberate and wants to gather all the information she can before making a decision on a difficult issue. She earnestly believes in bipartisanship and civil discourse.

“She fits a certain Maine model,” said Amy Fried, a University of Maine political science professor who has lived in the state for 20 years. “An individual who shows a great deal of civility, who shows great seriousness … and some modicum of independence. Or people think of that person as independent.”

Jim Manley, a former aide to ex-Senate Democratic leader Harry Reid, pointed to one famous episode during the tax debate. Collins hosted a bipartisan group of senators in her office and they passed around a “talking stick” as a symbolic totem of good-faith debate as each senator shared his or her views on the legislation.

It was “utterly meaningless in the end,” Manley said. Collins also secured a deal from Republican leader Mitch McConnell to bring up an Obamacare stabilization bill as she agreed to vote for the tax bill. That deal later fell apart, and no stabilization bill was passed. (Republicans blame the Democrats.) She was looking for a middle ground that isn’t anywhere to be found in modern-day Washington.

“I think in most or all the situations, she honestly thought she had a chance to pull it off, and she misread the situation,” Manley said.

In hyper-polarized times, the Maine senator is inevitably one of the true swing votes on any serious issue. About 45 or more Republican senators would vote for just about anything that President Donald Trump and Senate GOP leaders asked them to. Collins is one of the few who has the history, the political beliefs, and the standing to make her own choice.

She is left with a true tug-of-war in making her decision on Kavanaugh. On the one hand, part of her independent image is being pro-choice and strongly supportive of women’s rights even when the rest of the Republican Party is not. (Kavanaugh is thought to be opposed to abortion rights, though Collins has insisted otherwise.) She won two-thirds of women and 31 percent of Democrats in her 2014 re-election, according to a CNN exit poll.

But she also has said in the past she believes presidents have a right to name their own Supreme Court nominees. She is very focused on credentials, and Kavanaugh’s are solid. She is also very concerned with Senate procedure, and Kavanaugh’s confirmation has been anything but regular order.

“All of those brands are threatened by voting for Kavanaugh,” Fried said. On the other hand, “it would be a huge step for her not to support her president’s nominee.”

Collins reportedly set aside the whole day to watch Thursday’s riveting Ford-Kavanaugh hearing. She met Friday with five sexual assault victims from Maine. She has spent the last two weeks as the most sought-after senator in Washington — after a Wednesday Senate GOP lunch, some male senators formed a wall of bodies around Collins so she could duck onto the Senate floor without taking questions.

A final decision about Kavanaugh will inevitably be read as a ruling on one fundamental question, described by Sen. Murkowski to the New York Times: Is a woman who says she has been sexually assaulted, and that with 100 percent certainty her assailant was Kavanaugh, to be believed?

It’s an unenviable and unfair position — again, 40-plus Republican men are prepared to support Kavanaugh’s ascension to the Supreme Court, while two GOP women are left undecided. But it’s the way it is.

Russell, with protesters still lingering outside Collins’s office, hoped Collins would be true to what she described as a long history of strong Maine women. Collins is known to revere Margaret Chase Smith, a Republican senator from Maine for much of the mid-20th century who fought McCarthyism, and her former Senate colleague from the state, Olympia Snowe.

“We are so vehemently proud of the ladies from Maine. It is unbelievable,” Russell said. “She is part of that. It’s not about her legacy. It’s about the legacy of women in Maine that’s in the balance. I know what it was like growing up and it wasn’t a question: I could do anything I wanted, because I was a girl from Maine.”

But there is something about Collins and Snowe that people might forget, now that the latter has left the Senate and Collins is the only Maine Republican left to carry on tradition.

“For a long time, people thought of her as being above the party,” Fried told me. “But compared to Olympia Snowe, when you look at when they served together, she was more likely to be voting with Republicans.”

That is the impossible calculus for her as the world waits for Susan Collins’s decision.

Almost everyone I talked to, from senior Republican aides to progressive activists, seemed sympathetic to Collins’s position. But the reality is that it will likely rest on her shoulders, as well as those of Murkowski, whether Brett Kavanaugh is elevated to the Supreme Court.

On Friday morning, protesters and sexual assault survivors were holding out hope. They believed Collins would do the right thing, in their eyes, and reject Kavanaugh.

Russell said it one more time for good measure. “She’s a good person.”

How a Democratic president could reduce drug prices without Congress
With “Dynamite,” BTS beat the U.S. music industry at its own cheap game
From midlife crises to cowboy dreams: August’s biggest new albums
The Covid-19 pandemic could be the last straw for high drug costs
23andMe laid off 100 employees due to slowing DNA kit sales
Manafort trial jury ends first day of deliberations with no verdict