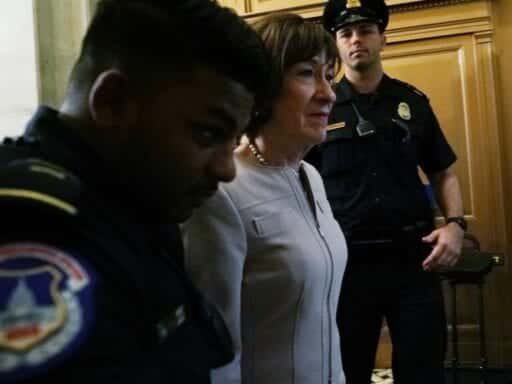 Now that Brett Kavanaugh has been confirmed to the Supreme Court, some Republicans seem to feel freer saying what they really think about the sexual assault allegations against him brought by Palo Alto University professor Christine Blasey Ford: They don’t believe them.

Maine Republican Sen. Susan Collins, an important swing vote on Kavanaugh who ultimately supported him, said in an appearance on CNN’s State of the Union aired on Sunday that she found Ford’s testimony to be “heart-wrenching, painful, compelling.” adding, “I believe that she believes what she testified to.”

Collins, however, did not.

“But we also had a case where Judge Kavanaugh came forward and said ‘I’m 100 percent certain that this did not happen,’” Collins told CNN’s Dana Bash. “So here you have two people, who are each 100 percent certain of what they’re saying, under pain of perjury, so then I had to look at the other evidence, and was there corroborating evidence, and that’s why I pushed hard for the FBI to do a supplemental background investigation.”

When asked directly by Bash whether it’s possible Kavanaugh had assaulted Ford, Collins was more direct. “I do not believe that Brett Kavanaugh was her assailant,” she said. “I do believe she was assaulted. I don’t know by whom. And I’m not certain when.”

Ford alleges that in the early 1980s while they were both at a high school party, Kavanaugh pinned her down, tried to take her clothes off, and covered her mouth when she screamed while one of his friends, Mark Judge, looked on. During her testimony before the Senate Judiciary Committee last month, she said she was absolutely certain it was Kavanaugh who assaulted her, and described the boys’ “uproarious laughter” during the incident. Kavanaugh denied the allegations.

The assertion that it wasn’t Kavanaugh who assaulted Ford coming from Collins is jarring — she’s considered one of the most moderate lawmakers in the Senate and is generally concerned about women’s issues. But she’s not the only one to make such an argument: Was Ford assaulted? Maybe. But was it Kavanaugh? No.

Conservative activist Ed Whelan in September went so far as to lay out a theory of who else might have assaulted Ford, using Zillow and old pictures and tweeting out his case. (He later apologized.) As Vox’s Jane Coaston wrote, a sort of Kavanaugh “doppelgänger” theory emerged on the right, with many conservatives arguing Ford must have been confused.

Sen. Orrin Hatch (R-UT) ahead of the judiciary panel hearing said Ford must have been “mixed up” and “mistaken” about who assaulted her. Sen. John Kennedy (R-LA) said something similar.

Sen. Kennedy of Louisiana says he believes something very very bad happened to Dr. Ford and he’s sorry, but he says he does not believe Brett Kavanaugh was involved and will vote yes. Another Whelanite.

President Donald Trump, when Ford initially came forward, was unusually quiet — to the point that aides told reporters they were surprised at his demeanor. But at a rally earlier this week, he openly mocked Ford, joking that she insisted she only had one beer and didn’t remember anything else about the alleged incident.

Speaking with reporters aboard Air Force One on Saturday while flying to a campaign rally in Kansas, Trump softened his tone slightly but stood by Kavanaugh, saying he is “100 percent” sure Ford had named the wrong person.

“This is — one of the reasons I chose him is because there is no one with a squeaky clean past like Brett Kavanaugh,” Trump said. “He is an outstanding person and I’m very honored to have chosen him.”

After the Senate vote on Saturday, Sen. Roy Blunt (R-MO) told Vox’s Li Zhou that memory can be a “tricky thing,” even though Ford’s experience was “traumatic” and her memory of it was “genuine.”

“Kavanaugh was very unequivocal in his categorical denial of this or anything like it,” Blunt said. “He went a lot further than he would have needed to go if he had ever been involved in anything like this, because anybody could have come forward. But that doesn’t belittle her trauma, I don’t think, in any way.”

Of the message this gives to American women, Blunt said it should be “that you’re not guilty just because somebody says you’re guilty.”

Sen. Bill Cassidy made a similar assertion when speaking to Vox’s Ella Nilsen. “Anyone, whether it’s a woman or a man, can hopefully trust that their reputation will not be destroyed by one, uncorroborated allegation,” Cassidy said.

The message from some Republicans seems to be believe women, but only the parts of what they say that is convenient.

“Extinction breeds extinctions”: How losing one species can wipe out many more
Trump nominates Brett Kavanaugh to Supreme Court: full transcript
Ted Cruz tweets out viral Beto O’Rourke video in a bizarre move
Coronavirus’s threat to the global economy — and what to do about it
Alex Jones blames “psychosis” for his Sandy Hook conspiracies
Why fire is our best tool against megafires