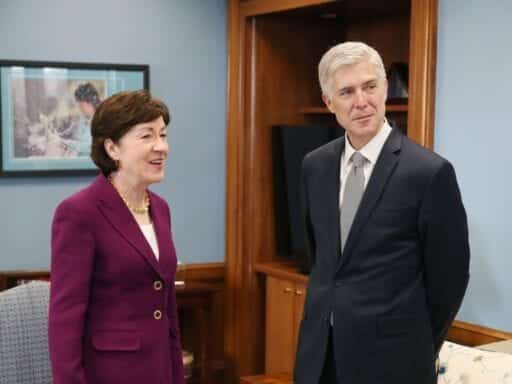 She also says she trusts Gorsuch and Roberts won’t overturn it.

Sen. Susan Collins (R-ME), a key swing vote in the upcoming fight to replace Anthony Kennedy on the Supreme Court, says she won’t support a nominee who has demonstrated “hostility” to Roe v. Wade, the historic decision legalizing abortion in the United States.

But her stance isn’t likely to help pro-abortion rights advocates sleep better at night, either — she suggested she thinks two of the court’s conservative justices wouldn’t vote to overturn the decision, an assertion that’s far from guaranteed.

Collins and Sen. Lisa Murkowski (R-AK), both moderate Republicans who support abortion rights, are considered two of the most important votes in the Senate’s confirmation process for President Donald Trump’s upcoming Supreme Court pick. Kennedy’s retirement has ignited fears that Roe v. Wade might be in danger from a more conservative court that would chip away at the decision or seek to overturn it altogether.

In a pair of interviews on Sunday, Collins explained her approach to President Donald Trump’s nominee, who he plans to announce from a pre-existing shortlist of 25 candidates on July 9.

“I would not support a nominee who demonstrated hostility to Roe v. Wade because that would mean to me that their judicial philosophy did not include a respect for established decisions, established law,” Collins said in an interview with Jake Tapper on CNN’s State of the Union on Sunday.

Republican Sen. Susan Collins says she told President Trump that she wanted the Supreme Court justice nominee to be someone who “would respect precedent” and encouraged Trump to broaden his list of potential nominees to the Court #CNNSOTU https://t.co/hdc9wRfwKz

She made a similar assertion in a subsequent interview with Martha Raddatz on ABC’s This Week. “I told [Trump] that I was looking for a nominee that would demonstrate a respect for precedent, a longstanding [and] vital tenet of our judicial system,” she said. Collins also said she had suggested Trump “broaden” his list of 25 potential nominees in a meeting with her president about her views on Kennedy’s replacement.

What Collins is saying is that judges who believe in judicial precedent — essentially, that a decision’s been made and that’s that — shouldn’t be looking to overturn Roe. The decision came down in 1973 has already been made and reaffirmed many times since.

Trump, who during the campaign said he’d use abortion as a litmus test for potential Supreme Court picks and whose list of nominees was put together by conservative groups, told Fox Business host Maria Bartiromo that he “probably” wouldn’t ask a nominee about his or her abortion vote.

To be clearer here after a reader email – they’ve addressed their views on constitutionality of Roe v Wade previously. There is a school of thought among some senior Rs that for Kavanaugh it’s a lesser issue. But as for how they view the law,’they’ve all stated it. https://t.co/C1lmr05BgV

Collins suggested it might be a moot point anyway, because she thinks several of the courts’ existing conservative justices would defer to precedent.

When asked if she thought Justice Neil Gorsuch would vote to overturn Wade by Tapper, she replied, “I actually don’t,” adding she’d had a “very long discussion with Justice Gorsuch in my office and he pointed out to me that he is a co-author of a whole book on precedent.”

Collins made a similar assertion about Chief Justice John Roberts. “Roe v. Wade is a constitutional right that is well established, and no less an authority than Chief Justice Roberts said that repeatedly at his confirmation hearing,” she said.

In her interview with Raddatz, Collins said she wants to see a nominee who “regardless of his or her personal views on the very difficult and contentious life issue is going to respect precedent regardless.” She apparently expects the same of Gorsuch, who she voted for, and of Roberts.

Placing such a bet on two conservative justices seems like quite a risk to take for choice advocates, as well as for an reproductive-rights believer such as Collins. The Maine Republican has shown willingness to buck her party for her beliefs in the past, including on the Obamacare repeal vote.

But her comments suggest she might be closer to voting for Trump’s Supreme Court nominee than not, and as Vox’s Andrew Prokop notes, Roe is definitely in peril:

Erwin Chemerinsky, the law dean of UC Berkeley, wrote in 2016 that the replacement of a justice like Kennedy with a conservative would mean there “almost certainly will be a majority to overrule Roe v. Wade and allow states to prohibit abortions.” Jeffrey Toobin, the legal writer for the New Yorker, tweeted that he thinks Kennedy’s replacement by Trump means “abortion will be illegal in twenty states in 18 months.”