Suspiria reimagines a cult classic as a bone-cracking tale of women, power, and pain 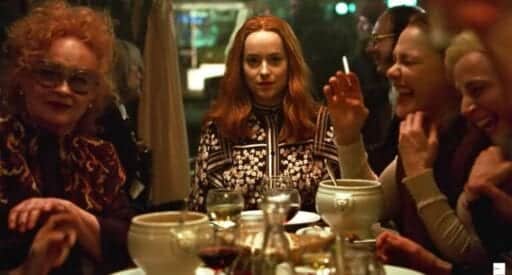 Bodies have limits, and dance kicks at them, trying to make the impossible look easy. The sounds of that effort are often masked by music, so it’s easy at times to forget the physicality of the dancers — to miss the thuds, the squeaks of sweaty skin skidding on the floor, the gasping and panting for breath.

Suspiria foregrounds that corporeality, mixing it with elements of the inexplicable, and the result is horrifying, maddening, transfixing, transcendent. It’s the most ambitious and unsettling and confounding and cathartic movie I’ve seen this year, with some of the most disturbing images I’ve ever seen in a movie, at once bone-cracking body horror par excellence, meditation on women’s power and history, tale of ancient occultish matricide, and worthy homage to the decades-old movie that inspired it.

It resists efforts at making “sense,” though there are plenty of keys strewn throughout to unlock its many secrets. But you’ll want to make sense of it anyhow.

Inspired by Dario Argento’s 1977 film by the same name — which, in turn, was inspired by Thomas De Quincey’s opium-fueled 1845 essay Suspiria de Profundis — this incarnation of Suspiria, directed by Luca Guadagnino (Call Me By Your Name), feels like new flesh molded around old bones and lit on fire.

Less remake, more regeneration, Guadagnino’s Suspiria retains its predecessor’s setting and setup — a prestigious German dance school run by a shadowy coven — but digs its hooks into elements that Argento’s film floated past. The result is something much scarier, more chilling, more menacing, and absolutely, wholly its own.

Suspiria is a wild, brutal horror tale that evolves beyond its predecessor into something wholly different and darker

Guadagnino decided in concert with screenwriter David Kajganich (with whom he worked on 2015’s A Bigger Splash) to set his film in 1977, the same year Argento’s film was released. It begins when Patricia (Chloë Grace Moretz), shaking and disturbed, stumbles into the office of her psychiatrist Dr. Jozef Klemperer (played by “Lutz Ebersdorf,” but actually Tilda Swinton under convincing layers of prosthetics and cosmetics).

Patricia tells Dr. Klemperer that the Markos Dance Academy, where she has been studying, is run by a coven of witches, and leaves behind a satchel of her journals, in which she’s scribbled about the “Three Mothers”: Mater Suspiriorum (Mother of Sighs), Mater Tenebrarum (Mother of Darkness), and Mater Lachrymarum (Mother of Tears). Klemperer is sure Patricia is just delusional.

The day following Patricia’s visit, ingenue Susie Bannion (Dakota Johnson) arrives from the Midwest to study at the famed German dance school and live in its dormitories with the other dancers, as in Argento’s original film. She meets Sara (Mia Goth), a wealthy student who was close to Patricia and is devastated by her disappearance.

Excited at first to be among her dancing idols, Susie soon realizes that something not quite right is going on, and the more she digs, the closer she gets to danger.

But while the original film was about Susie (Suzy, in Argento’s version) trying to escape the clutches of the dance mistresses in a ballet school, this is something much different. In this film, the dance company performs contemporary dance. It has moved from Freiburg to Berlin, a city that in 1977 was divided by a wall between the East and the West, as well as between older Germans who wished to forget what had happened only decades earlier during the War and younger Germans who insisted it must be remembered.

Susie’s arrival coincides with the German Autumn, when a series of terror attacks throughout the year culminated in several key events: The Red Army Faction kidnapped and murdered Hanns Martin Schleyer, head of the country’s main business association; three members of the Baader-Meinhof group died by suicide in prison; and a Lufthansa passenger jet was liberated days after being hijacked on the tarmac in Mogadishu. The country was on high alert.

This all forms the backdrop of Suspiria, the swirling chaos spotted in the background on radios and TV news broadcasts. In the foreground is Susie’s integration into the academy, headed by the mysterious Madame Blanc (Tilda Swinton again), with whom Susie — who was raised in a Mennonite community in Ohio — has been quietly obsessed for years, watching films of the company’s dances so many times that she knows the parts by heart already.

The school is led by a series of matrons and populated by lithe young dancers, all trained to perform Blanc’s angular, powerful form of dance. And though the young woman is mostly untrained, Madame Blanc spots Susie’s talent instantly.

That becomes important when Olga (Elena Fokina), incensed at Madame Blanc’s suggestion that Patricia didn’t disappear, but left the academy to join the RAF, storms out of the academy. Blanc permits Susie to fill Olga’s spot in an upcoming production and — touching her gently — imbues her with some kind of preternatural power of dance that also, in a (literal) twist, turns out to be Olga’s undoing.

That’s merely where Susie’s evolution begins. And where Argento’s film had the character trying to escape, Guadagnino’s does anything but that. Instead, Susie is drawn deeper into what’s going on at Markos, and Suspiria builds nightmarishly, exploding into a wild, blood-soaked climax that solves few mysteries — but hints at many others.

Suspiria is more about dream logic than real logic, more web than timeline. That it starts the year Argento’s film was released feels right: The spirit that animates that one feels reborn in this one which, in a sense, is its point — a spirit of rebellion and subversion against authoritarian powers, particularly patriarchal ones. Female energy and crafty women working in secret, it suggests, are responsible for keeping the world’s creative heart beating, even while skirmishes and wars and insurrections fight to beat it down.

That its name and eventually its mythology are tied up with the idea of “suspirium” makes sense, then — though in Latin the words “suspirium” (a sigh or forceful breath) and “spiritus” (the spirit) are separate, for most of ancient times the concepts of breath and spirit, or life force, were tied up together.

The same word is used for both throughout the Bible, for instance, in both Hebrew and Greek. Concepts like prana and qi (or chi) are also linked to both breath and spirit or life force. Breath starts life, and it ends when the breath is gone.

In Suspiria that life-giving force is carried by women, particularly by the Three Mothers of Sighs, Darkness, and Tears, and by those who serve them — including in the dance academy. So the film is rife with symbolism about nationalism (the dance the Markos group is performing is one that Blanc created in the wake of the war, meaningfully called “Volk,” or “people”), about women’s power against men (who in this film are often at the mercy of the dance academy mistresses once they step in its doors), and — perhaps most troublingly — about the complexity of that power yielded by women against one another.

And so I agree with other critics that I would have liked to have seen a Suspiria written and directed by a woman who was as deeply affected by the story as Guadagnino clearly was, and as willing to get tangled up in it and not try to untie it all. Perhaps we’ll get that version in the future.

In the meantime, though, it’s impossible to ignore how skillfully Guadagnino dove into the material and came up with something all his own. Argento’s version of the story is noted not so much for its storytelling — which can be lightweight and campy at times — as for its visual style, which pulses with bright and bold colors, wild lighting, and surreal camera angles.

Guadagnino largely sidesteps those for most of the movie, rendering a muted Berlin in greys and browns, and when he finally slips into Argento’s visual style it’s all the more terrifying by contrast. Argento enlisted the Italian band Goblin for his film’s iconic soundtrack; Guadagnino brought in Radiohead’s Thom Yorke, who delivers an eerie score.

And by leaving lots of plot threads tangled and unexplained, this Suspiria leaves us with far more unease. Dance and horror became allies long ago, when early ballets in the courts of kings and queens often involved stories about witches and deities, werewolves and spirits. Many of the most famous ballets in repertoire today are, essentially, horror stories — about broken-hearted swan-women, about princes imprisoned in wooden dolls, about women dancing men or themselves to death.

In movies like Black Swan, filmmakers cannily turn the implied horror of these stories into horror films about women’s bodies and the history of dance, the pain and discomfort experienced en route to flawless performance, the exacting and sometimes abusive choreographers, and the rules that artists want and need to break.

That the new Suspiria is set among a contemporary dance troupe in a Berlin recovering from a war, grasped by an imposed rule, cowering from terror attacks, and grappling with its own sordid history makes for a perfect place to explore those same motifs.

And by its enigmatic end, Suspiria is troubling and grim and yet strangely mirthful, having opened wounds without much interest in closing them. This is not a film you untangle; it’s a movie you feel. That will drive some mad. For others, it will feel something like ecstasy.

Suspiria opens in theaters on October 26.