Syria has confirmed its first cases of coronavirus. An outbreak there would be hell. 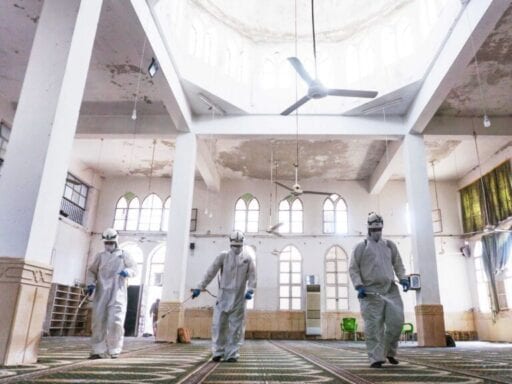 Share
Loading...
Members of the Syrian civil defense, known as the White Helmets, disinfect a mosque as part of the efforts to prevent the spread of the coronavirus in Idlib province, Syria, on March 26, 2020. | Muhammad Haj Kadour/AFP via Getty Images

“If we face this situation here, I think it will be endless.”

Syria has now confirmed five cases of the novel coronavirus, putting it on the growing list of countries contending with the deadly pandemic.

But Syria isn’t just another country. It’s one that has been ravaged by war for nearly a decade, which has decimated its infrastructure and left a large segment of the population at high risk of infection.

Syria’s public health care system, once considered among the best in the region, is in shambles. Hospitals and other health facilities have been destroyed by nine years of targeted attacks. Millions displaced from conflict live precariously in Syria’s overcrowded northwest, and others across the country suffer the burden of an ailing economy, which makes closing businesses and losing incomes during an outbreak an added concern.

If health care systems in Italy, Spain, and the United States are overwhelmed by the onslaught of Covid-19 cases, Syria’s prospects are grim — especially in Idlib, the last opposition-held area in Syria’s northwest.

“If we face this situation here, I think it will be endless,” Mohamed Twaish, a field coordinator for Relief Experts Association, a humanitarian organization working in Idlib province, told me.

“If the disease starts, it will spread massively”

Fear that the virus is already festering has been growing for weeks among humanitarian organizations in Syria’s northwest, where the capacity of health care facilities to test and monitor suspected coronavirus cases is especially limited.

Many hospitals in Idlib are no longer operational, and those that are up and running don’t have enough specialized equipment such as ventilators to support patients with respiratory problems like those caused by the virus.

Hani Taleb, CEO of Relief Experts Association who is part of a task force on coronavirus awareness in the region, said an outbreak in northwest Syria would devastate the already overwhelmed health system in the region.

“We do expect that if the disease starts, it will spread massively,” Taleb said.

Idlib has suffered some of the worst violence in the nine-year war, with nearly 1 million people displaced since December 2019 when the Syrian government, backed by Iran and Russia, launched an offensive to reclaim the last rebel-held territory in the country.

The province has absorbed people displaced from other parts of Syria, while living conditions for millions living there further deteriorate as more people get squeezed into a smaller and smaller area near the Turkish border. A fragile ceasefire went into effect in Idlib earlier this month.

With the outsize threat of an outbreak in the region, health organizations are preparing for the worst, but a containment response is hampered by a shortage of supplies, including test kits. Taleb said 300 tests arrived this week from the Early Warning and Alert Response Network (EWARN).

Tests from the World Health Organization that are expected this week have not arrived yet, and none of the referral hospitals or isolation centers that have been slotted to take Covid-19 patients are ready to do so, he said.

Ten suspected cases that have been tested in a lab in Idlib have come back negative, and other test results for other suspected cases in the northwest are pending. “If a case is actually reported, it will be announced so loud so that help can come to assist people here,” Taleb told me.

Until testing and isolating capacities are bolstered, Taleb said the main focus among health organizations is raising awareness about the severity of the threat — something that doesn’t always resonate among populations who’ve escaped death and destruction.

Health organizations have begun distributing information about virus prevention measures and training community health workers about how to protect themselves from it. “The only thing we can actually do is prevent the disease from spreading so massively to a point any health structure can absorb,” Taleb said.

Basic protective gear is also severely limited for health workers and those providing community awareness. Syria’s neighbor Turkey announced that it will stop exporting locally made face masks as more coronavirus cases are confirmed. No shipments of protective equipment have arrived in northwest Syria from outside the region as of yet, Taleb said.

Mohamed Twaish, the field coordinator, said the fear of infection from the coronavirus extends to local health workers, who also have to contend with limited health care resources.

Twaish was also displaced from his home in the Idlib countryside and said despite growing awareness about the risks of the virus, surviving day to day is still a pressing concern for many. “People need to work on a daily basis to get money needed for their families,” he said.

In refugee camps like al-Hol in Syria’s Kurdish-controlled northeast, where around 68,000 people including families of former ISIS fighters live, the situation is also dire.

Ingy Sedky, spokesperson for the International Committee of the Red Cross in Syria, said part of the Covid-19 response is merely keeping emergency supplies like clean water and disinfectant flowing in camps and detention centers where the virus could spread rapidly. “These are the most vulnerable,” she told me.

On Monday, United Nations Secretary General António Guterres called for a global ceasefire, citing concern about the fear of Covid-19 spreading among populations that have already been sideswiped by years of unrest. In addition to Syria, cases of the coronavirus have been confirmed in war-torn Libya, as well as Afghanistan and the Gaza Strip.

Cases of the coronavirus have also been confirmed in Syria’s neighboring countries Lebanon and Turkey. Border crossings with these countries have been closed, as have borders between government and opposition areas inside Syria.

Dareen Khalifa, a Syria analyst at the International Crisis Group, said unmonitored entry of militias and civilians from Iran, Iraq, and Lebanon in addition to illegal border crossing and smuggling routes means there is still risk of infections being brought from outside.

In addition to the vulnerable populations in Syria’s north who’d be left scrambling to get care if a bigger outbreak occurs, anyone in need could be in a bind if there is a large number of infections in the rest of the country. “As the Syrian economy continues to deteriorate and violence escalates, fewer and fewer families will be able to access even the nominally available public care,” Khalifa told me.

The Syrian government this week implemented a curfew as a measure to prevent the spread of the virus. Prior to this, the government had already closed restaurants, cafes, and other businesses, and launched a disinfection campaign in the capital city of Damascus.

Schools closed and university lectures are being held online. Ali Awene, a 22-year-old undergraduate student at the International University of Science and Technology, said he has never had classes in Damascus disrupted for that long during nine years of conflict.

Awene said inflated prices for goods and services — something people in Syria have grown used to with inflation and currency devaluation from foreign sanctions — have only gotten worse. Virus-prevention supplies like gloves, masks, and cleaning products are also more expensive now.

“We’re not rich, we’re not poor, we’re in the middle, so we can afford this. But some people really can’t,” Awene told me.

And while domestic problems are nothing new for Syrians, a virus spreading from halfway around the world is a shock to the system, even for people who’ve lived through a war. “It’s really far away, it’s in China,” Awene said of the initial thinking around the outbreak. “We never thought it would get in here.”

Betsy Joles is an independent journalist based in Beijing, China. Find her on Twitter @betsyjoles.