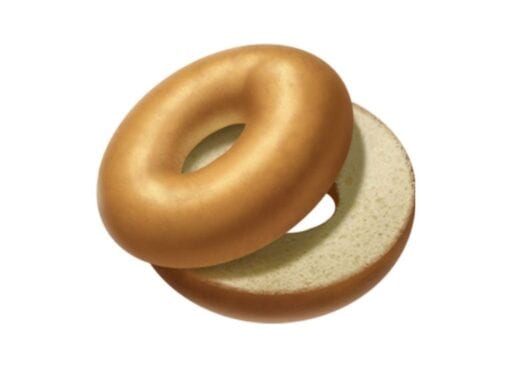 There’s a new bagel emoji, and people have strong feelings.

After much buildup, Apple has released its latest slate of emoji this week, and soon iOS users will have 70 more textable pictures, including “badger,” “abacus,” and “cupcake,” which, by some miracle, already existed.

Somehow, one of those new emojis has already landed in hot water: the bagel. After all, a bagel is not just a bagel, Freud might have written but did not. A bagel is a symbol of … well, we can’t exactly decide what.

It is depicted sliced in half, and dry. Is this a good way to eat a bagel? No. Still, the image is very successful at doing its job, which is to communicate the concept of “bagel.”

Bagel enthusiasts, though, were very upset. “Take a look at this clearly machine-cut monstrosity with its stiff and bready interior, which couldn’t possibly be redeemed by a few minutes in a toaster,” lamented Nikita Richardson at Grub Street. (Redemption is the only reason a bagel should ever be toasted, according to true bagel originalists; to toast a fresh bagel is a symptom of what former New York Times food critic and current culinary curmudgeon Mimi Sheraton calls a “decline in the craft of bagel making.”)

Richardson was not alone in her dismay.

I’m organizing a march in New York City against Apple’s just-revealed bagel emoji, which comes out with the next iOS update. It looks like something you get from a cardboard box in the freezer section at Walmart. This insult will not stand. pic.twitter.com/Z44YFBuUlU

The bagel emoji, tweeted journalist Josh Glancy, is “the most gentile bagel ever baked.”

This is true. Generously, let’s say it appears to be a Lender’s bagel, a longtime staple of the freezer aisle. This is not the dis it sounds like: Lender’s was founded by Harry Lender, a Jewish baker who immigrated from Poland between the world wars, which is about as “authentic” as bagel origins get. Eventually, he figured out how to freeze the bagels from his bagelry — “New York Bagel Bakery,” in New Haven, Connecticut, and one of the first bagel stores outside New York City — and by the late ’50s was distributing them, frozen, to grocery stores in bags of six.

This process was tweaked and mechanized, and the bagels got softer and sweeter than is traditional — call this the assimilation of the bagel — but this process is also what brought bagels into the mainstream. The Lender’s bagel, wrote Matt Yglesias for Slate, was an innovation in “the field of mediocrity.” If Harry Lender had been a bagel snob, many, many fewer people would have gotten to experience the wonder that is bagels.

Part of the bagelmoji ire, explains Heather Schwedel at Slate, is a performance of discerning taste. “People want to demonstrate that they, unlike those emoji rubes, know from good bagels,” she writes, noting that with much of the outcry coming from New York, “there may be some geographic snobbery going on too.” A good way to prove you are a true New Yorker is to be extremely opinionated about bagels, whether real or pixelated.

Debate around the “authenticity” of food emoji is not new

We have been down this road before. The 2015 release of the taco emoji also sparked widespread frustration, which can largely be summed up as: That hard-shell, lettuce-topped, Taco Bell-esque food item is not a real taco. (It’s worth noting that Taco Bell was, in fact, a major player in the campaign for a taco emoji in the first place, although demand predated the chain’s involvement.)

“The taco emoji should be modeled on an authentic taco,” declared L.A. Taco, a publication devoted to “the taco lifestyle.” While it was quick to acknowledge that the constitution of an “authentic” taco is also controversial, the publication was clear that the Unicode Consortium — the governing body of emoji — had “missed an opportunity” to honor the real taco.

The original Taco Bell-style taco emoji is colorful and clearly recognizable — important for an emoji — but “standard authentic taco” could have been those things, too. “While cartoon representations naturally rely on broad stereotypes, here we missed a rare opportunity to preserve the integrity of this dish and raise international awareness,” L.A. Taco concluded.

This particular battle has been won, sort of. The 2016 emoji release that came with iOS 10.2 revealed an updated taco image (for Apple users, at least), with a soft shell, and cilantro and carne asada instead of lettuce and ground beef.

Emoji originated in Japan, but if they tend to depict the Americanized version of something — not the boiled Eastern European bagel, but a fast-food version; not a Mexican taco, but a Taco Bell translation — there’s likely a reason for that.

While the Unicode Consortium’s subcommittee on emoji, which meets twice a week to consider such issues, is an international group, most of the voting members are affiliated with American tech giants, like Apple and Google, explained Adrienne LaFrance at the Atlantic. So no matter a food’s origins, it gets processed through a largely American lens.

That might sound bad — diversity is important! We love authentic things! But ethnographer Christina Xu, who studies the social implications of technology, suggested to the Atlantic that the fixation on increasingly realistic emoji, rather than more abstract or inscrutable images that leave room for interpretation, is, in its own way, also an American thing. “[T]his idea that we’re going to somehow create a truly diverse emoji set, when the concept of diversity itself is so essentially American? It’s almost a disguised form of American cultural dominance.”

By that logic, an image of a bread circle, rather than a more “authentic” poppyseed-pocked, boiled-then-baked everything bagel, might in fact be truer to the original, non-American spirit of the original emoji. This is so complicated it makes you think we should just go back to using words.

But as Jeremy Burge, the founder of Emojipedia and creator of World Emoji Day, told CNN, people want to see themselves in their tiny icons.

“Some of the most vocal requests for new emojis are about representation,” he said. The dumpling, the taco, and the pan of paella, for example, all had extremely popular backing. Linguists may not consider emoji a language, Jennifer 8. Lee, the driving force behind the dumpling emoji, told the Atlantic, but “for people who use them, it’s almost like fighting for a word that [shows] you exist. When you come up with a word to describe your population, it’s a very powerful thing.”

Does anyone feel represented by a bagel?

There is, of course, a separate question, which is whether it makes sense to see the bagel as describing an identity at all. The last time New Yorkers got worked up about bagels, it was over then-gubernatorial candidate and political outsider Cynthia Nixon ordering an unconventional cinnamon raisin-caper-lox combo — an affront to the sanctity of bagels, according to bagel purists.

According to the New Yorker’s Adam Gopnik, though, the criticism that Nixon was doing bagels wrong didn’t even make sense. The rules of bagels, he wrote, are “by now vestigial or even quaint.” Bagels were once “ethnic food,” but they aren’t anymore: They’ve assimilated, he argued. To be mad about how they are or aren’t eaten — or, perhaps, how they are or aren’t depicted on your smartphone — is out of step with demographic realities.

At the same time, the outcry over the bagel emoji suggests that there are people who really do feel — on some level, even if it is tongue-in-cheek — that the bagel does represent them in some way, and that this anemic version (“the most gentile bagel ever baked”) does a disservice not only to carbohydrates but to the rich diversity of American identity. (That, and people generally enjoy being angry on the internet.)

There is, perhaps, no good answer. We could return to more abstract emoji. We could build a just and equitable global society where the existence or lack of an emoji might carry fewer implications. We could use words. In the meantime, though, we will revel in what’s left of our shared humanity the best way we can: by being mad at the Unicode Consortium about a picture of a bagel.