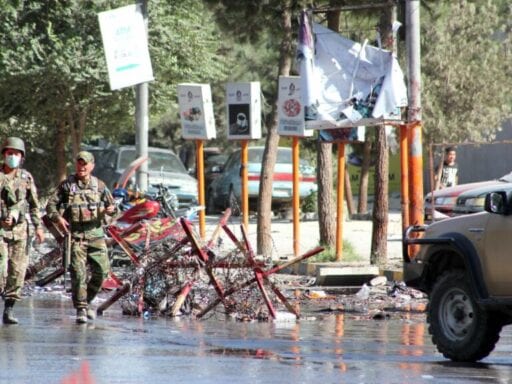 Share
Loading...
The scene of a suicide attack in Kabul, Afghanistan, on September 17, 2019. It came the same day as a blast at President Ghani’s campaign rally killed at least 26. | Sayed Khodaberdi Sadat/Anadolu Agency via Getty Images

A deadly day in Afghanistan as US-Taliban peace talks stall and Afghanistan prepares for presidential elections.

The Taliban has claimed responsibility for two attacks in Afghanistan on Tuesday that together left at least 40 dead and dozens wounded.

The twin blasts, one of which targeted a campaign rally for Afghan President Ashraf Ghani, come more a week after President Donald Trump declared peace talks with the Taliban “dead.” The attacks are a reminder of what’s at stake in those talks — and what’s slipping away.

The first bombing occurred at a police training ground about 35 miles north of Kabul where the Afghan president was holding a campaign rally for the upcoming national elections. A suicide bomber rode his motorcycle into the crowd that was waiting to go through security checkpoints to enter the rally, provincial officials said.

At least 26 were killed and more than 30 injured, though officials said that number might rise. Children were among the victims. President Ghani was protected in a compound about a half-mile away from the bombing, according to the New York Times, and was unharmed in the blast.

House later, the Taliban took credit for another bloody bombing near Kabul’s “Green Zone,” where the country’s ministry of defense, the US embassy, and NATO are all headquartered. According to officials, at least 22 people were killed and at least 38 injured in that explosion.

The attack was close to the site of another suicide bombing at a NATO checkpoint earlier this month that killed 12, including one American service member. That attack was, at least in part, one of the reasons President Donald Trump gave for scrapping peace talks with the Taliban.

The double suicide bombings come ahead of Afghanistan’s elections, which are currently scheduled for September 28 after months of delays. Ghani, who’s running for another five-year term, has promised that elections will go ahead this month.

But campaigning has been marred by Taliban violence, as the insurgent group has vowed to disrupt elections, which it says have “no legitimacy.” The Taliban has warned civilians to stay away from campaign events, because those events could be targets.

The elections were also, perhaps counterintuitively, in doubt for another reason: US-Taliban peace talks. The Afghan government has not been involved in the negotiations between the United States and the Taliban, and Ghani has been somewhat critical of their efforts.

The Taliban views the current Afghan administration as illegitimate; the Afghan government has complained that the negotiations lacked a commitment by the Taliban to call a ceasefire, basically a promise to suspend attacks on Afghan citizens, which usually is a precursor to these types of talks.

The US planned to reach a deal with the Taliban — some sort of agreement on American troop withdrawal in exchange for a Taliban ceasefire and a promise not to allow terrorists to operate in their territory — and then afterward to try to set-up a second round of talks specifically between the Afghan government and the Taliban.

But before negotiations broke down last week, the timing of what looked like an impending peace agreement was quite awkward, coming just weeks before Afghanistan was planning to hold national elections on September 28.

As the Associated Press reported, many candidates just assumed the election wouldn’t happen once a peace agreement was signed, and that an interim government would be set up instead to negotiate a potential power-sharing deal with the Taliban.

The uncertainty around the US-Taliban peace talks means the elections are on, at least for now. But it also means the Taliban will continue to try to derail the vote with violence.

That’s interrupted candidates’ campaigns (even Ghani has mostly campaigned via video) and threatens to cause chaos for voting on election day. The government has committed about 70,000 security forces to protect the elections, but will have 2,000 fewer polling stations than in the last presidential election in 2014, according to Al Jazeera. The Taliban has said polling stations will be targets.

There’s reason to doubt how fully democratic these elections will be, as the confusion around the peace talks and the looming threat of violence might deter Afghan voters. This also underscores just how critical a real peace agreement would be for the country — a chance, after 18 years, to potentially achieve a resolution to the unceasing violence.

Trump’s coronavirus national emergency declaration, briefly explained
How to travel during the international coronavirus outbreak
Get yourself a pandemic crush
President Trump’s list of false and misleading claims tops 1,000
Here’s the full list of nominees for the 2020 Golden Globes
How to apply for unemployment benefits if you’re a freelancer or self-employed