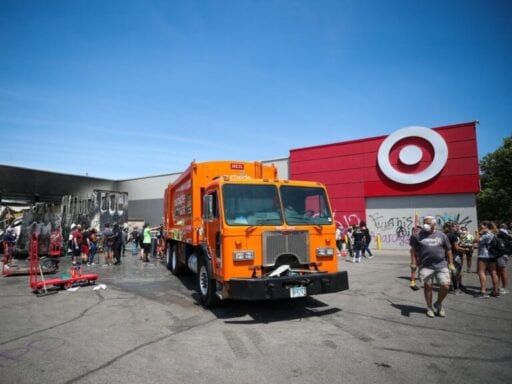 Share
Loading...
The Target store on Lake Street in Minneapolis was badly damaged by protesters, but the company has pledged to rebuild it. | Tayfun Coskun/Anadolu Agency via Getty Images

A damaged Target in Minneapolis has shined a light on the company’s cozy programs with cops.

Target will temporarily close or limit hours at about 200 stores as protests over the death of George Floyd continue to sweep the nation. Other major retailers like Apple, CVS, and Walmart are doing the same. But Target, which is headquartered in Minneapolis and has a history of working with police there, seems to be getting a lot of attention. At least a few people have started spreading a refrain on social media: “Loot every Target.”

Looting Target specifically dates back to the first days of the protests in Minneapolis. The company’s Lake Street store — which is about 3 miles from where George Floyd, an unarmed black man, died after a police officer pressed a knee against Floyd’s neck for nearly nine minutes — was looted and partially burned last week. It’s not clear if the Lake Street store was deliberately targeted, but it is across the street from the Minneapolis Third Police Precinct, which was burned to the ground amid anti-police brutality demonstrations. And again, many other retailers, including Walmart, were looted over a weekend that was filled with peaceful protests as well as some demonstrations that became violent after police got involved.

At the same time, the destruction of this particular Target location is sparking discussions about police partnerships and surveillance programs facilitated by the company, both at the Lake Street store and at Target stores nationwide.

“Target HQ is in Minneapolis. Lake St. Target, which got looted tonight, is literally Target’s experimental site for loss prevention & surveillance policies geared toward poor people. Very few people in the neighborhood like that Target,” security engineer Ian Coldwater explained in a tweet. “It’s also why Lake Street Target is so consistently awful in different ways to all the other ones, it’s engineered to be that way.”

Others have dug into Target’s past to highlight the company’s work with the Minneapolis Police Department. The company offered the city “financial and intellectual support” for the city’s SafeZone program, which set up a network of closed-circuit television (CCTV) cameras all around downtown Minneapolis and gave radios to business owners for sharing issues in real time. That support included a $300,000 donation, and the whole program was inspired by a similar one in Northampton, England, which had used the technology to fight a crime wave and attacks from the Irish Republican Army (IRA). The SafeZone program was part of the larger Safe City program and has since become a nonprofit independent from Target. Recode reached out to the SafeZone program in Minneapolis but did not hear back in time for publication.

Over the years, Target has expanded its work with police nationwide. A 2010 report by the Police Executive Research Forum, a law enforcement membership organization, says that “Target and local partners have started Safe City projects in more than 20 other cities across the United States.”

That’s not all. Target critics are also pointing to a 2011 article from Minnesota Public Radio (MPR) describing how the company created the Target Forensic Services Laboratory focused on investigating a range of crimes including shoplifting. The featured lab was located at Target’s Brooklyn Park campus in Minneapolis, and, according to MPR, it stayed busy “lending its high-end technology and professionals to law enforcement agencies free of charge.” The article points out that the Target lab carries the same certification used by any crime lab at a police department.

“We ask for nothing in return. There’s no quid pro quo — we’ve never asked for video forensics services or anything else we’ve done for anything,” Target VP Brad Brekke said at the time. “We just offer it up as a commitment to them and the community.”

On its corporate website, Target explains that, starting in 2003, the company has been running the lab in Minneapolis and a second lab in Las Vegas. The program “offers assistance to domestic law enforcement agencies free-of-charge” and “is reserved for violent felonies or special circumstance cases.” Target adds that its forensics labs can provide fingerprint, video, and audio analysis. The company also says it has “created a secure site that allows Target and law enforcement agencies to collaborate” and that it provides grants for public safety agencies.

Target’s pursuit of high-tech security tools has continued over the years. In 2016, Bloomberg reported:

Like Walmart, Target relies heavily on video surveillance, but it employs sophisticated software that can alert the store security office when shoppers spend too much time in front of merchandise or linger for long periods outside after closing time. The biggest difference, police say, is simply that Targets have more staff visible in stores.

The Seattle Times reported that those particular technologies, as well as “testing facial recognition software to prevent fraud and theft in a small number of stores,” were discontinued in 2018.

Target CEO Brian Cornell addressed the situation at the Lake Street store in a statement on Saturday, though he didn’t specifically reference the looting. He pledged to rebuild the devastated store later this year, but he did not mention Target policies about working with police departments or its approaches to store security. Target did not answer Recode’s questions about its current use of facial recognition or surveillance technology, or whether it had any plans to change how it works with police.

As the George Floyd protests enter their second week, it seems evident that the unrest will continue, and we don’t know if looters will descend on Targets or Walmarts or Apple Stores or anywhere. Over the weekend in Brooklyn, however, several protesters blocked a Target entrance from would-be looters. Even if looting continues, experts say Target probably has a good insurance policy to cover the damage.

Virtual dating is booming, but daters say it’s not enough
North Korea contradicts Trump on the reason a summit deal fell apart
Joshua Brown, a key witness in the murder trial against Amber Guyger, was fatally shot
Midterms 2018: New York’s Alexandria Ocasio-Cortez slated to become youngest woman in Congress
The deadline for the UK’s “Brexit” from the European Union is looming
The GM strike has officially ended. Here’s what workers won and lost.