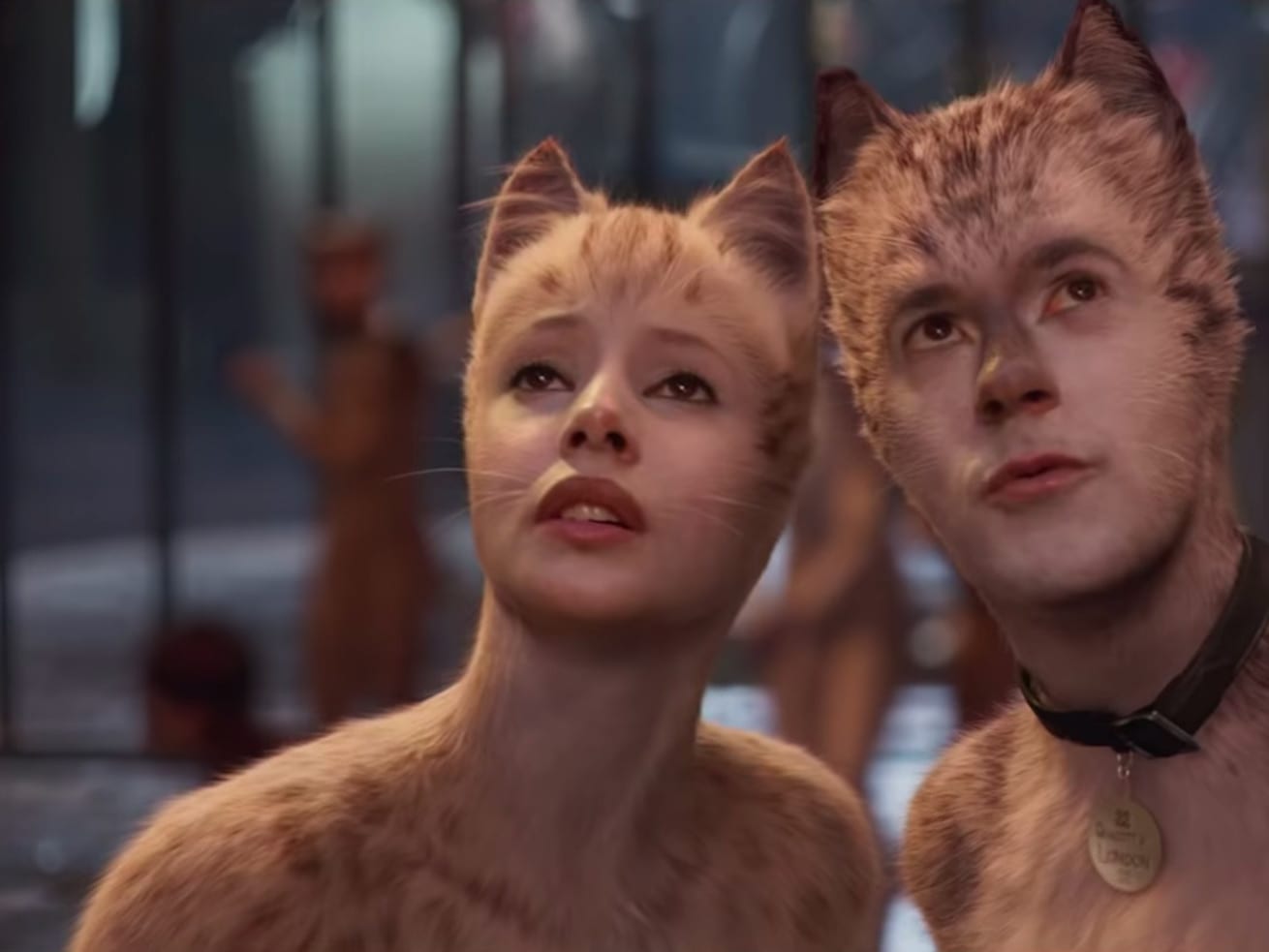 The new song Swift wrote with Andrew Lloyd Webber has a lot to teach us about cats, “Memory,” and fangirls.

Lloyd Webber, a.k.a. ALW, is the man who brought the world Phantom of the Opera, Jesus Christ Superstar, Evita, and one of the most recorded songs in theatre history, “Memory” from Cats. (Estimates for the number of artists who’ve covered the song range from 150 to 600+.) ALW is notorious for writing musicals with beautiful music and weak lyrics. But “Beautiful Ghosts” makes a compelling argument that what every ALW musical needs is a shrewd lyricist who was once a teenage girl — and who, consequently, is not embarrassed to embrace the gushy romantic heart of his music.

The song was released November 15 as promotion for film ramps up ahead of the movie’s December 20 release date. And while the new trailer that followed sent us into a grim, slow meltdown, “Beautiful Ghosts” is a good song that suggests niceness can still emerge from this trainwreck of a film.

Here are five reasons “Beautiful Ghosts” is worth a second listen, or several.

1) It adds to our understanding of Victoria, the White Cat

“Beautiful Ghosts” isn’t a showy end-credits pop song; it’s a new song inserted into the plot of the show. I use “plot” very loosely. Cats the musical is based on the work of great modernist poet T.S. Eliot, set to music by ALW. It’s about … cats choosing who will go to cat heaven. (Yes, really.)

Not many people remember how weird the plot of Cats is because the only Cats detail most people care about is “Memory,” — a song that musicologist Jessica Sternfeld summarized as “a hit song of massive proportions, by some estimations the most successful song ever from a musical.” But “Memory” itself is such a weird song.

It’s performed by a character named “Grizabella, the Glamour Cat,” a lone, starving alley cat who was once a famously beautiful cat (?!) before she became a friendless, down-on-her-luck feline sex worker (?!?!). She “haunted low resorts” and was exiled by all the cats, until her depression and despair, articulated in “Memory,” finally provokes their sympathy — for which her reward is … getting to die.

“Beautiful Ghosts” will follow “Memory” in the upcoming film. The cat who sings it, Victoria, is principally a dancer, and in the musical her character is creepily portrayed mainly through her dawning sexual awakening. But in Hooper’s film, Victoria has a bigger role: Now, the entire story is framed through her point of view, and Victoria is a younger mirror of Grizabella.

In “Beautiful Ghosts,” Victoria echoes “Memory” and reflects on Grizabella’s tragic life, as well as her own. “Memory” keeps calling for “new life,” while through “Beautiful Ghosts,” Victoria transitions from “Memory’s” sadness to a joy that’s all her own — through the realization that she loves the life she has. Where “Memory” is fuzzy, with vague hints of former happiness, “Beautiful Ghosts” weaves a mini-narrative of Victoria’s life: Cast onto the streets, apparently by cruel former owners, she distrusts other cats, but eventually befriends them and comes to love her life. With this one song, she goes from being opaque and silent to having depth, complexity, and a backstory that doesn’t involve her being a sex object.

2) It helps us understand “Memory”

Even though “Beautiful Ghosts” is sung by Victoria to Grizabella, it also gives us crucial insight into Grizabella’s life. When Victoria sings lines like, “Should I take chances when no one took chances on me?” she’s simultaneously referencing her own life and Grizabella’s: Grizabella at least knew a time when she was loved and admired, and had human companionship to look back on. Victoria has only known rejection.

Taylor Swift has clearly asked herself, “How can I bring more coherence to “Memory,” a weird-ass song about a cat who is also a sex worker who is also dying and friendless and stuck with her memories of having once been very hot?” The solution, which she provides in “Beautiful Ghosts,” is to give Grizabella slightly more of a past.

In a recent radio interview, Swift described her approach to creating the song — which involved contrasting Victoria’s life with Grizabella’s:

‘Memory’ is Grizabella singing about how she had all these beautiful, incredible moments in her past. She had these glittering occasions and she felt beautiful and she felt wanted and now she doesn’t feel that way anymore.

This is fanfic on Swift’s part. While this glittering history can be implied, it’s not literally in the lyrics to “Memory,“ or anywhere else in Cats — the most concrete detail “Memory” offers is that Grizabella once enjoyed “days in the sun.” It’s a huge bonus to see Grizabella given a more concrete backstory that has nothing to do with her, uh, hanging out in brothels.

“Beautiful Ghosts” explains that Grizabella was “born into nothing” but now has memories of “dazzling rooms” and a time she was not just beautiful, but loved. In essence, Swift has not only crafted a satisfying character song for Victoria — she’s deepened Grizabella and “Memory” too.

This is hard! “Memory” couldn’t manage it — the song does not remotely sound like as if it’s sung by a character who is a cat. But from the first line of “Beautiful Ghosts” (“follow me home if you dare to”) the song feels like one that could be sung by a cat — one who has wandered the streets, hearing the voices of its fellow cats in the dark. Victoria sings of the “wild ones” who “tame the fear” within her as she longs to “get let into” the rooms inhabited by the humans she once knew and yearned for love from. These are bittersweet lyrics, but more importantly, they’re lyrics that pretty clearly describe the life of a cat.

The extent to which Swift has thought about how cats feel becomes increasingly apparent when you realize that “Beautiful Ghosts” is a hymn to found family and the alley cat existence, the freedom of a life lived on the streets, and the beauty of, well, a gang of stray cats. (If this is also maybe starting to sound like a metaphor for marginalized communities finding strength in each other after being turned out of their homes, well, nobody knows how to appropriate queer pride like Taylor Swift.)

The typical trade-off with Andrew Lloyd Webber musicals is that his lush, lofty melodic lines take priority over lyrics. This approach works to make his songs popular — after all, studies have shown that sweeping, ascendant melodies make people feel intense emotions. But if the lyrics are weak — for example, if characters say lines that feel overblown, generic, or irrelevant to the story they’re in — then the musical as a whole can suffer.

The general wisdom among musical theater fans is that ALW was only truly great when he was composing with his earliest collaborator, the brilliant lyricist Tim Rice. The ALW/Rice shows (Jesus Christ Superstar, Joseph and the Amazing Technicolor Dreamcoat, Evita) are fantastic — witty, satirical, and incisive, ranging from complex political themes to rollicking whimsy and charming pastiche. But as good as they are, it’s obvious that they weren’t the kind of shows ALW really wanted to write, because after the team split up, ALW wrote a series of increasingly sentimental shows, from 1982’s generically sad Song and Dance to 1989’s bonkers melodrama Aspects of Love (which I love).

ALW’s later shows’ scores were often gorgeous, full of beautiful melodies. But the plots were often too soapy, and he bounced around between lyricists who frequently paired his music with asinine words. When ALW was working with someone equally as or more talented than he was, he managed to create popular, lasting shows, including Cats and Phantom of the Opera, helmed by the late great director Hal Prince. But ALW didn’t always work with equals who could rein him in. And so he only kept getting more extravagant in his desire to combine deeply emotional musical motifs with schmoopy, overblown storylines. In other words, post-Rice, ALW has always been hampered by his own self-indulgence and the lack of a lyricist as good at writing lyrics as ALW is at writing music.

That’s why a Taylor Swift-ALW collaboration is genuinely exciting. In the annals of ALW collaborators, Swift may be the first lyricist with the range, experience, and stature to stand alongside Rice. But more importantly, she clearly loves Cats, loves the music, and loves actual cats. In that interview quoted above, for example, she discussed Victoria’s cat psychology at length. I cannot imagine any circumstances in which Tim Rice would say, as Swift did in that interview, “I got you. I know what that cat would say.”

And that may be what so many previous ALW musicals have lacked: the enthusiasm of a smart, savvy songwriter who’s also not afraid to unironically love and embrace her subject matter. Taylor Swift isn’t just a brilliant songwriter who credits the lyrics of Fall Out Boy’s Pete Wentz for teaching her to write music with sharp edges and blatant emotive power. She’s also a fangirl. And fangirls know how to deliver deep, smart character studies while amplifying the emotional core of the stories they love.

That combination of shrewd songwriting and passion is what propels the final verse of “Beautiful Ghosts” into something truly great.

Taylor Swift learned a lot from brilliant country songwriters, and one of the common country song traits she likes to carry forward is the “twist.” That’s when the final stanza upends the original meaning of the song and shifts the refrain into something new, surprising, and even richer.

Throughout “Beautiful Ghosts,” Victoria has emphasized the fact that Grizabella still has her memories: “at least you have something to cling to … at least you have beautiful ghosts,” she sings, and the ghosts are the memories of Grizabella’s life of being beautiful and adored.

By contrast, Victoria herself has always lived on the streets, eventually taken in by the stray cats she eventually began to see as family. Initially, she describes the strays as voices she can only hear in the dark, while she wanders the streets, “alone and haunted.” Later, they become “phantoms of night,” as they lure her into her new exciting life.

Finally, when Victoria has her epiphany that she’s happy with her friends, and she loves her alleycat life, she shifts from singing enviously to Grizabella about the “beautiful ghosts” of her memories. Instead, she sings, “So I’ll dance with these beautiful ghosts.”

The ghosts at the end of the song are the cats! Victoria’s ghosts are flesh and blood, and also have you ever met a cat, cats are clearly ghosts, with their silent paws and their eerie glow-eyes, and their ability to vanish into thin air. (Holy shit, the ghosts are the cats!)

Only Taylor Swift could turn a metaphor about lost memories into a literal description of cats that is also a metaphor for found families and friendship. Don’t argue with me, this is perfect.

Manafort’s poorly redacted filing reveals new Mueller investigation details
Vox Sentences: Emmett Till might get justice in the end
Watch: Ayanna Pressley learns she won her Massachusetts primary for Congress
SNL and its cast close the season with a touching goodbye
Why 12 Thai boys are still trapped in a cave, days after being found
In Netflix’s Becoming, Michelle Obama tells her story and encourages us to do the same