Tech billionaire Marc Benioff used to give millions to politicians. Then he bought Time magazine. 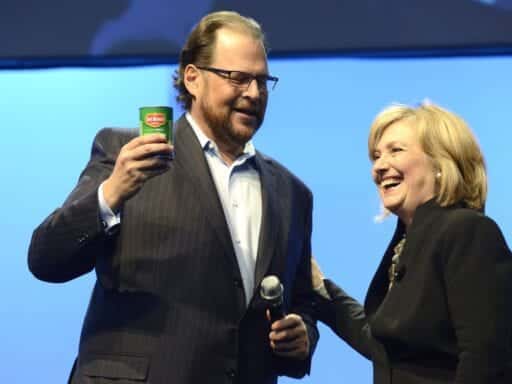 Benioff is swearing off future political donations, in stark contrast to the rest of Silicon Valley.

Marc Benioff, the billionaire who has emerged as a spokesperson for a more liberal and civically active Silicon Valley, is stepping away from partisan politics.

Recode has learned the founder of Salesforce is no longer making political contributions to candidates, fundraising for candidates, or endorsing candidates. It’s a stark departure from Benioff’s storied past as a political animal who has given millions to campaigns and picked bruising fights with other tech leaders over tax evasion and corporate power. The reason? Benioff is likely striving for impartiality after buying Time magazine in late 2018.

“I will not [be taking] public positions on candidates,” he told Recode in a text message. “I no longer make political positions or funding since buying Time Magazine.”

Benioff shared that policy when asked which presidential candidate he would be voting for on Tuesday in California’s Democratic primary. Benioff said he had “stopped everything” revolving around candidates — something that he says he’s been explaining recently to the many political aspirants who have been coming to him seeking support.

Originally a self-described Republican who gave his very first check to Steve Forbes during Forbes’s quixotic run for the GOP nomination in 1996, Benioff went on to take an appointment in the George W. Bush administration. Over the years, he has turned more liberal in his political giving — in 2016 he hosted a fundraiser for Hillary Clinton — but he continued to make donations to some Republicans, such as Kevin McCarthy just last May.

“I was at one time a Republican, but now I’m an independent,” Benioff wrote in his new book, Trailblazer, published last year. “I’ve given advice to both George W. Bush and Barack Obama. I personally held a fundraiser for Hillary Clinton in 2016, but I had no problem coming to the Donald Trump White House in my capacity as a business leader to talk about workforce development and technology training programs. Salesforce is not a political organization and our values don’t come with party affiliations.”

Over the last 25 years, Benioff has given $1.7 million to politicians and groups, including a $500,000 contribution to a gun-control group in 2013. But Benioff made no disclosed political contributions dating back to June of last year except for donations to Salesforce’s PAC, his longest stretch of political inactivity since mid-2014, according to a review of federal records.

It’s not unreasonable for media owners to try to avoid taking partisan political stances so as not to jeopardize their publication’s objectivity. It can put reporters in a bind — one need look no further than the conniption at Bloomberg News as its owner, Mike Bloomberg, runs for president.

But Benioff is taking a step away from partisan politics at a moment when other tech leaders are rushing toward it. Silicon Valley has been awakened by a new spirit of activism to protest the Trump administration, and some tech billionaires have sought to channel their money and energy toward new political projects to remove Trump from office in 2020. Benioff, if anything, has taken the opposite tack: He has fostered an at-times warm relationship with the Trump administration — convincing the president to sign off, for instance, on a new tree-planting initiative — and resisting calls from Salesforce employees to cancel the company’s contract with Customs and Border Protection since the agency helps implement the Trump administration’s immigration policy.

There is one exception, however, to Benioff’s new vow of political neutrality: The garrulous Salesforce founder said he would continue to weigh in on ballot measures related to homelessness, an issue close to Benioff’s heart. (Other ballot initiatives, Benioff said, he would personally stay out of.)

In 2018, Benioff argued publicly with another tech titan, Twitter and Square CEO Jack Dorsey, over a tax proposition that would fund new anti-homelessness spending in San Francisco, where Salesforce and Twitter are both headquartered. The measure, Proposition C, eventually passed, to Benioff’s delight.

And he himself has long been dogged by speculation that he would want to run for San Francisco mayor someday. With the Time deal, that seems as unlikely as ever.