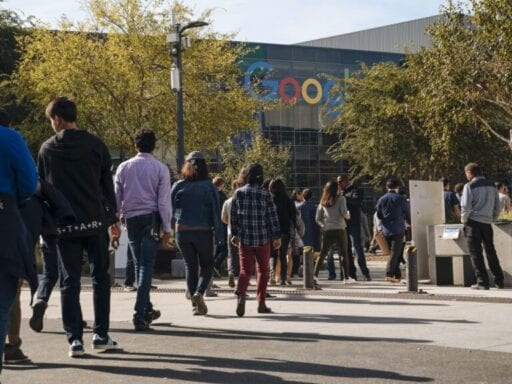 Share
Loading...
Google employees participated in a historic show of tech worker activism at a walkout in November 2018. Now, for the first time, some professional workers are voting to form a union at the search giant. | Mason Trinca / Getty

A group of Google contractors who hold college degrees, get paid as little as $40,000 a year, and don’t receive sick days are voting to unionize on Tuesday.

Tech workers — particularly those whose job it is to sit at a desk and work on a computer all day — have historically been reluctant to unionize. In tech, the idea goes, employees tend to be paid well, to receive good benefits, and to have plenty of flexibility, so there’s no need for a union.

But a group of Google contractors in Pittsburgh who are employed by a third-party vendor, HCL, are bucking that trend. These 80 employees who work as analysts and trainers for Google’s shopping product will participate in a historic vote on Tuesday to unionize with the United Steelworkers. It’s thought to be the first time that white-collar workers at the search giant have tried to officially unionize (some Google service contractors, such as security guards, have successfully unionized in recent years). Organizers say they expect workers will vote for the union, with over 66 percent of employees signing cards that indicate they’re in favor.

Most of the employees organizing hold college degrees, get paid as little as $40,000 a year, and don’t receive sick days or many of the other perks that direct Google employees get. These workers are members of a second-tier “shadow workforce” of tens of thousands of temps, vendors, and contractors (called TVCs) at Google, who make up over half of the company’s total staff and have reported receiving fewer benefits and less pay than permanent employees. Their organizing comes at a time when non-contract employees have also been publicly critical of the company’s stance on both internal and external policies, such as how it regulates speech in the workplace and its contribution to carbon emissions.

“I feel like I could lose my job for any reason,” Josh Borden, an analyst for HCL who is part of the group of workers involved in unionizing, told Recode. Borden and several of his colleagues told Recode that they want to unionize largely because of the precarious nature of their employment with HCL. “Every year I get really high performance reviews, and I do a lot more work than I’m supposed to. But I’m still worried about my job all the time. … A couple years ago they brought in a whole team and told most of them they were let go. It seems like a built-in expectation of turnover.”

Google, along with other major tech companies such as Facebook and Apple, increasingly rely on temporary workers to staff flexible projects. These temps work at a cheaper cost than prized full-time engineers who easily command six-figure salaries and appreciate greater job stability.

Despite these disparities, the tech industry has long resisted unionization by all kinds of workers, said Margaret O’Mara, a professor of history at the University of Washington.

“There’s a reason this has never happened before,” O’Mara told Recode. In the past, white-collar unionization efforts have failed at major tech companies like Microsoft in part because executives who are “philosophically opposed” to the idea have successfully helped squash efforts, O’Mara said. “Tech moves very fast. You have to upsize, downsize — you have to have immense flexibility in your workforce. Unionization gets in the way of that.”

But now that a surge of tech employee activism in the past year and a half has created a stronger sense of solidarity among workers, these efforts may be harder for management to stifle, said O’Mara.

If the union does end up passing the vote, it could be a game changer not just for Google but the entire tech industry, according to O’Mara and several full-time employee activists at Google and other major tech companies.

So far, the union effort has encountered some roadblocks. Organizers at Pittsburgh have accused HCL of employing union-busting tactics, such as forcing managers to have mandatory one-on-one meetings with reports in which they discouraged workers from starting a union. Managers threatening to fire workers for starting a union is illegal but suggesting that a union may hurt the business is not.

Regardless, Google has acted as a buffer against these efforts, employees said, by barring HCL’s outside consultant, Eric Vanetti, from holding anti-union meetings on Google company premises. Organizers said they’ve been pleased with Google’s response on the matter.

HCL did not respond to a request for comment. A spokesperson for Google sent Recode the following statement:

”We work with lots of partners, many of which have unionized workforces, and many of which don’t. As with all our partners, whether HCL’s employees unionize or not is between them and their employer.”

The HCL contractors have also seen support from their full-time Google colleagues, who have created an internal petition with over 400 signatures in favor (from both Google employees and TVCs) asking the company to remain neutral.

”I’m proud to see my fellow tech employees, coworkers in our Pittsburgh office, coming together to collectively fight for what they deserve from HCL,” one full-time Google employee who asked to remain anonymous told Recode.

“This is a huge deal,” said another full-time Google employee who also asked to remain anonymous. “It proves that the organizing is working, that tech workers are seeing that they don’t have to put up with these issues anymore.”

But at the desk-job level, Google temps haven’t had much success in organizing. In March, Google abruptly fired over 34 members of its voice assistant team, who, like the Pittsburgh workers, were highly educated workers doing technically skilled jobs. Nine hundred Google employees signed a petition objecting to their treatment in a sign of solidarity, and the cuts shed a light on the precarious nature of jobs that are critical to Google’s business.

A union, organizers hope, would prevent workers in Pittsburgh from suffering the same fate as those who worked on the voice assistant team.

“Right now, the company sets the terms. There’s no room to negotiate anything; you take what they give you,” said Borden. “The only way we see to improve things is to speak with one voice.”

Gretchen Whitmer’s smart, boring speech highlighted Democrats’ biggest 2020 dilemma
Trump’s last rally as president was supposed to be about the Georgia runoffs. It wasn’t.
Ben & Jerry’s is donating a total of $100,000 to 4 progressive causes
Trump’s impeachment trial countermessaging has been tasteless and incorrect tweets
Electric vehicles are going to render the fight over fuel economy standards moot
“Definitely not”: Iran’s foreign ministry rejects the possibility of a meeting with Trump