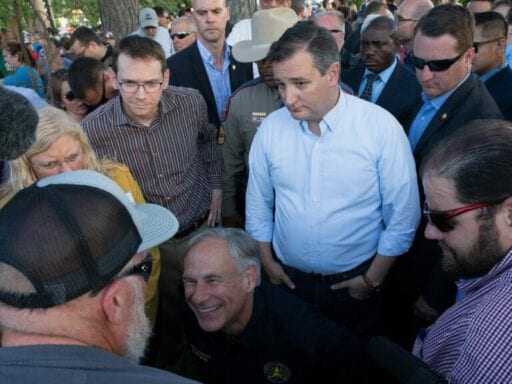 Cruz’s Republican colleague once called him a “miserable son of bitch.” Now the Texas senator needs the GOP’s help.

Is Ted Cruz at serious risk of losing his Senate race?

That question is beginning to spook the Republican Party, as more worry the hype around Democratic Rep. Beto O’Rourke’s bid to unseat the sitting Republican in deep-red Texas might translate to something real.

Over the weekend, White House Office of Management and Budget Director Mick Mulvaney told Republican donors that Cruz’s unpopularity could put the Senate at risk, the New York Times reported.

“There’s a very real possibility we will win a race for Senate in Florida and lose a race in Texas for Senate, okay?” Mulvaney said, according to the Times. “I don’t think it’s likely, but it’s a possibility. How likable is a candidate? That still counts.”

There’s been no subtlety among Republicans leaders; they want donors writing checks. Texas remains one of the reddest states in the country, and Republicans there still think Cruz is the most likely winner.

But it’s “close enough that every Republican who cares about Ted Cruz as a US senator needs to be worried,” Austin-based Republican strategist Matt Mackowiak tells me, adding that among Republican voters in Texas, a “yard sign panic” has broken out, as O’Rourke’s name appears to be occupying more lawns than Cruz’s.

O’Rourke, a third-term Congress member who represents El Paso, a largely remote and isolated district in Texas, has been consistently polling within single digits of Cruz this summer. Nationally, he’s become an almost unavoidable figure, drawing media attention from Stephen Colbert and Ellen DeGeneres and becoming the subject of President Donald Trump’s tweets.

Meanwhile, Cruz, once the ultimate thorn in Republicans’ sides as a performative anti-establishment conservative, seems to have put his political theater to the side — and is now in need of a GOP rescue mission.

There’s no question that turning Texas blue remains a major uphill battle for Democrats, who will need unprecedented voter turnout in a conservative state with one of the lowest voter participation rates in the country. But it’s becoming increasingly clear that Cruz is facing headwinds in an expensive state that most Republicans didn’t anticipate having to worry about.

Republican panic around Cruz is setting in for real

There’s nervousness about Texas rippling through the Republican Party.

Nationally, a Cruz loss would be devastating to the GOP’s chances of holding on to the Senate and a major hit to the party psyche. In Texas, even a close race between O’Rourke and Cruz could put more than a dozen statehouse and congressional seats at risk for Republicans.

“We’re not bluffing, this is real, and it is a serious threat,” Sen. John Cornyn, the Senate majority whip, told Politico. “If Ted does his job and we do ours, I think we’ll be fine. But if we have donors sitting on the sidelines thinking that, ‘Well, this isn’t all that serious,’ or ‘I don’t need to be concerned,’ then that’s a problem.”

It’s easy to see why O’Rourke, in particular, is spooking Texas Republicans. In a state with beleaguered Democratic Party infrastructure, O’Rourke hasn’t hired a political consultant or pollster on his campaign; he brags that he’s not taking any money from PACs and maintains a progressive platform even in the most conservative parts of the state. His campaign still raised over $10 million in the summer months, more than double what Cruz pulled in.

He has proven to be the kind of insurgent candidate who can easily overshadow someone like Cruz — once the unconventional newsmaking firebrand.

O’Rourke’s unusual but powerful style of retail campaigning has caught the attention of everyone from Hollywood to the White House. Trump tweeted last week that he would come to Cruz’s aide.

I will be doing a major rally for Senator Ted Cruz in October. I’m picking the biggest stadium in Texas we can find. As you know, Ted has my complete and total Endorsement. His opponent is a disaster for Texas – weak on Second Amendment, Crime, Borders, Military, and Vets!

Trump’s tweet alone is a shocking admission for the Republican Party that Cruz might need some help — and from a president Cruz was once reluctant to even endorse as the Republican nominee.

Ted Cruz is different these days

Cruz rose to fame for his anti-establishment political theater in Washington. This was the senator who read Green Eggs and Ham to shut down the government over Obamacare and repeatedly trashed his own party as part of his political strategy.

When Mulvaney told donors that “likability” could be an issue, it’s because not too long ago, Cruz had a reputation for being the worst.

Sen. Lindsey Graham (R-SC) once joked that if you “killed Ted Cruz on the floor of the Senate, and the trial was in the Senate, nobody would convict you.” Former Republican House Speaker John Boehner called him a “miserable son of a bitch.”

That persona propelled Cruz to the national stage with a presidential bid that was supposed to take the I’ll-be-an-asshole-for-America mantra all the way to the White House. Then Trump happened, and beat Cruz at his own game.

As Al Weaver detailed in the Washington Examiner earlier this summer, in the age of Trump, Cruz’s style has been much more muted. The most generous Republican observers say he’s been playing inside the state instead of on the national stage. More critical observers would say he’s lost his mojo, unable to rival Trump’s antics.

Either way, being the more team-friendly Cruz has come in handy, as the whole party looks to mobilize around him.

“There is a reality that he was not well-liked by his Senate colleagues,” Mackowiak said. “While the outside game was effective, not having inside game kind of harmed relationships internally — made some senators think he wasn’t a team player. When circumstances change, it’s important to change your approach. I’m not sure if the cavalry would be coming for him if he hadn’t changed his game.”

O’Rourke is within single digits of beating Cruz, recent polls found — a development that pushed the Cook Political Report to change the state’s partisan rating from Likely Republican to Lean Republican.

But in many ways, Texas remains an unbelievable challenge for Democrats.

O’Rourke notably underperformed in the Texas primaries; he won the primary and avoided a runoff but still lost some crucial border counties to a complete political unknown, Sema Hernandez. In March, it was a sign that O’Rourke didn’t have name recognition. In July, a Quinnipiac poll found that 43 percent of voters still haven’t heard enough about O’Rourke to form an opinion about him. Only 7 percent of voters said the same of Cruz.

This can be read two ways: Either Texas is too big for O’Rourke’s in-person style of campaigning or, with still slightly more than three months until Election Day, O’Rourke has a lot of room for growth in what is already a very close race. With Cruz, on the other hand, voters have largely already decided what they make of him.

Some things are clearer. O’Rourke has a lot of money, and voters who do know him overwhelmingly like him. And even if O’Rourke doesn’t win in November, making the race competitive could lead to significant Democratic gains in the Texas statehouse and in congressional races.

There’s an understanding that there will be a lot of money spent on Cruz and against O’Rourke in the coming weeks. And that alone is striking: In 2018, Republicans will have to spend a lot in Texas.

The EPA just undid Scott Pruitt’s final act in office
2020 Democrats may skip the next presidential debate over a labor dispute
In Sharp Objects’ “Closer,” women’s stories don’t belong to them
Parkland security monitor who sexually harassed one of the shooting victims was just fired
Trump’s daily intelligence brief reportedly warned of the coronavirus as far back as January
Why James Mattis couldn’t contain Trump