Teen Titans GO! to the Movies is a candy-colored cure for superhero-movie fatigue 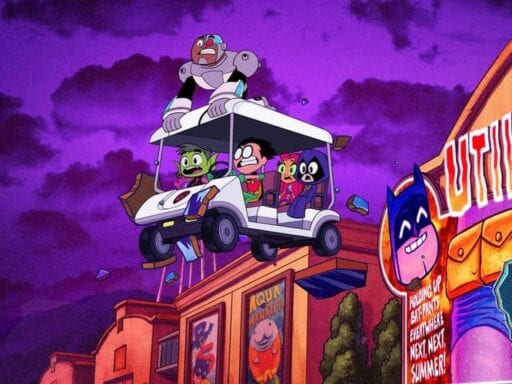 Right on the heels of Teen Titans leader Robin declaring, “Fuck Batman!” in the gloomy trailer for the upcoming live-action TV series Titans, a very different version of the Boy Wonder is leading his teenage team into theaters to issue a much more family-friendly rejoinder to the Caped Crusader — and, more pointedly, to the grim-and-gritty strain of superheroism he’s come to embody over the past few decades.

Teen Titans GO! to the Movies, the new feature-length extension of the Cartoon Network series Teen Titans GO!, is a product of Warner Bros. Animation — and therefore technically exists in the same cinematic universe as the company’s line of live-action DC films. It’s a lineage the movie revels in subverting.

An eye-searingly bright kids’ movie bedecked with songs and jokes about butts and their various functions, Teen Titans GO! to the Movies ﻿could not offer any starker contrast to such evergray, rain-and-angst soaked DC films as Justice League and Batman v Superman: Dawn of Justice. And yet it openly takes place in a world where those films, or simulacrums of them, not only exist, but have created a cottage industry where literally every superhero (and sometimes their butler) has their own movie — except the perpetually overlooked Teen Titans.

If you can’t already tell, meta comedy is the fuel that makes these Teen Titans go. In this respect, the film often plays more like an all-ages version of the recent Deadpool movies than any of its DC cinematic brethren — and not just because, like the Deadpool films, it pokes cheeky fun at superheroes owned by other companies (including Deadpool himself). Like both Deadpools, it delights in its status as an outlier within the superhero movie complex, both of and apart from an industry it mocks with glee.

While many pearls have been clutched over the years over the pervasiveness of the “grim and gritty” strain of superheroism, it would be hugely unfair to paint the entire genre with that brush. There are plenty of superhero stories, both on the page and on screen, that are colorful, funny, and ultimately optimistic.

But it’s much rarer these days to see superheroes who are silly, particularly in film. Even something as brightly comedic as last year’s Thor: Ragnarok ultimately takes seriously the business of saving the world/universe and acknowledges the nobility of those who make it their business to do so.

Enter Teen Titans GO!, which debuted on Cartoon Network in 2013 and is now in its fifth season. Developed by Aaron Horvath and Michael Jelenic — who also wrote the film, with Horvath directing alongside series producer Peter Rida Michail — the series features the same characters and voice actors of the beloved, acclaimed early-aughts animated series Teen Titans.

Though GO! has angered some purists for the ways in which it departs from its predecessor’s more conventional approach to superhero storytelling and characterization, its more lighthearted spin on the team has earned the show its own passionate fan base. The Teen Titans of GO! tend to strike a more ironic, bratty pose than their forebears, and are frequently less concerned with fighting crime than they are with pizza, singing goofy songs, messing with each other, and, erm, building equity.

GO! to the Movies, somewhat improbably, proves that the Teen Titans’ rowdy, chaotic, song-filled approach still works when extended from an 11-minute cartoon to an 88-minute animated movie. In fact, it may work even better when given the grounding force of a feature-length narrative, which gives Horvath and Jalenic both the space to explore some bigger ideas and a focal point upon which the chaos can converge.

That focal point takes the form of Titans leader Robin (Scott Menville), who heads to Hollywood alongside his teen teammates, Starfire the alien princess (Hynden Walch), Beast Boy the shape-shifter (Greg Cipes), Raven the sorceress (Tara Strong), and Cyborg the cyborg (Khary Payton). They’re hoping to ride the superhero-movie wave into a claim of legitimacy, something they’ve been denied due to their propensity to do things like halt a big villain fight so they can perform their own theme song.

But although mega-filmmaker Jade Wilson (Kristen Bell) is handing out movies to just about every superhero in existence (resulting in some deep-cut jokes that will delight comics historians in the audience), she deems the Teen Titans unworthy of the big-screen treatment.

This snubbing spurs the Titans, led by Robin and the ever-deepening chip on his shoulder, to do whatever it takes to prove their super-hero bonafides. Their first course of action: Find themselves an arch-nemesis. One quickly presents himself in the form of Slade (Will Arnett), a gun-and-sword-wielding assassin (who is definitely not Deadpool) with a plan for — what else? — world domination, which might just involve all the A-list superheroes who are off making movies.

Those A-list superheroes — specifically Batman (Jimmy Kimmel), Wonder Woman (Halsey), Superman (Nicolas Cage, in a particularly inspired bit of casting), and Green Lantern (Lil Yachty) — pop in and out of the story to help underline the Titans’ outsider status.

They also help underline Teen Titans GO to the Movies’ disinterest in adhering to any sort of larger continuity involving the Justice League and their various movies: Both Wonder Woman and Batman v Superman are specifically referenced as movies rather than in-world events, and no one seems to realize or care that the non-teen Cyborg has appeared as part of the live-action Justice League.

These heroes, their movies, and their backstories are all thrown higgledy-piggledy into a story that somehow finds coherence, mainly thanks to the film’s firm commitment to its own riotous subversion of the superhero game. (This extends right on through its obligatory end credits sequence, which anyone familiar with the Teen Titans’ onscreen history will want to make a point to stick around for.)

That all may make Teen Titans GO! to the Movies sound much more cerebral than it actually is. This is, after all, a PG-rated film aimed at kids, and it behaves as such at all times. But its kid-friendly, free-for-all spirit rides atop an undercurrent of pointed commentary about the state of the superhero industry (and the entertainment industry more broadly) that will give those parental guides something to hold onto amid the candy-colored cacophony.

Or, they could just surrender and enjoy the butt jokes. They’re pretty good butt jokes!

The murder spike in big US cities, explained
Inside Jack Dorsey’s radical experiment: Rihanna, Jay-Z, and a new model for billionaires to use the...
The US-China “Cold War” reaches Houston
The Supreme Court just rejected a Republican effort to make it harder to vote
Is it time for American cities to stop growing?
I’ve spent decades studying elite schools. Here’s how their culture enables toxic masculinity.