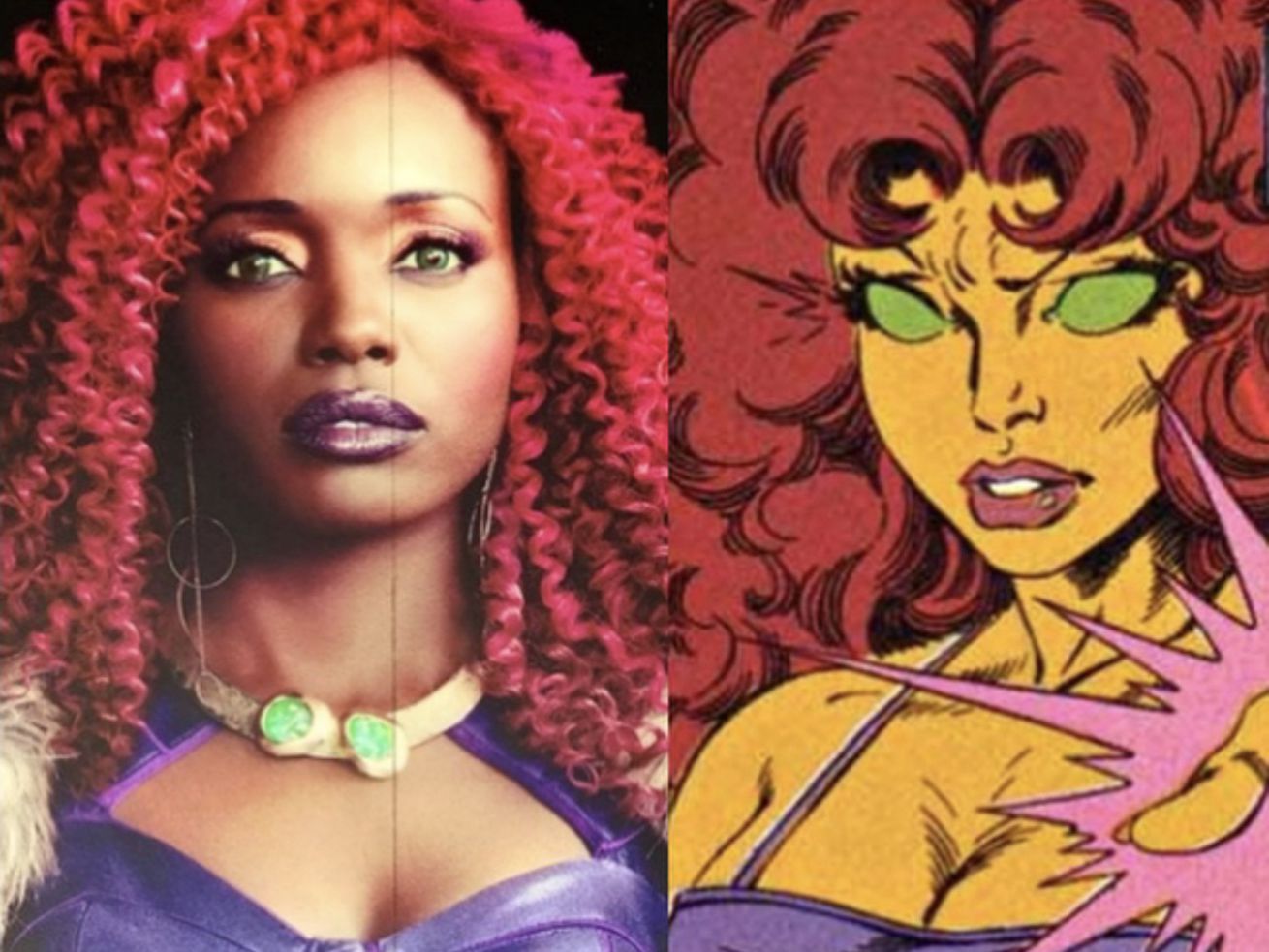 Actress Anna Diop had to disable the comments on her Instagram after a slew of racist attacks.

It takes a particular strain of hateful ignorance to harass someone so much that they don’t feel safe on social media. And it appears that certain “fans” of DC Comics’ Teen Titans have tapped into that toxic combination.

In comic books, two cartoon series, and a new animated movie, Starfire is a female alien with creamsicle-colored skin and a mane of scarlet hair. Like many female characters you see in comic books, Starfire is a supernatural and unrealistic being — a work of pure imagination. Understandably, and largely because orange-skinned, energy-projecting aliens are not real, Titans cast a human actress named Anna Diop to play Starfire in a darker, grittier live-action TV version.

With Starfire, Diop, who has appeared on shows like Bosch and Greenleaf, snagged possibly the biggest role of her life. But in doing so, she also became a target of social media attacks from people who at best believed she didn’t embody their version of Starfire, and at worst resorted to heinous misogynistic and racist attacks on Diop:

Following the wave of harassment, Diop has turned off comments on her Instagram and minimized her social media presence. It’s the latest chapter in a particularly ugly ongoing saga about a certain segment of comic book “fans” not getting exactly what they want and retaliating in the worst way possible.

Starfire is orange in the comics. People are mad that a black actress is playing her.

People got their first chance to see Diop in action as Starfire when the first trailer for Titans was released during Comic-Con last week. The trailer was met with a fair bit of skepticism (and mockery), mainly because it featured a flagrantly emo Robin uttering the phrase, “Fuck Batman.” But that strange moment doesn’t mean the show is going to be bad, and for all we know, it could be great.

Unfortunately, the trailer was also the first time the more toxic portions of Teen Titans fandom got to see the trailer, and they leveled their skepticism and mockery at a different target: Diop’s appearance, and specifically, her skin color.

“She is too fat and too dark for Starfire,” a fan wrote. (BuzzFeed compiled the ugly comments.) “Starfire is not African,” another fan commented.

#notmystarfire this is the REAL starfire, making every character black (when the closest to our skin colour was Latino for her) doesn’t promote diversity just seems forced pic.twitter.com/VVugbVQ8Ir

This is actually the second round of ugliness that Diop has faced for playing Starfire. Back in April, the first stills of Diop in her Starfire costume were released, and people were quick to react with outright racism and hate speech.

Those hateful comments didn’t just exist in a vacuum on the nastiest corners of Twitter either. Diop’s Instagram page was flooded with similar hate, and still was right up until the trailer dropped and she disabled comments. She addressed the racism at the time of the set photo leaks in a now-deleted post.

“Too often social media is abused by some who find refuge in the anonymity and detachment it provides: misused as a tool to harass, abuse, and spew hatred at others,” Diop wrote. “This is weak, sad, and a direct reflection of the abuser. Racist, derogatory, and/or cruel comments have nothing to do with the person on the receiving end of that abuse.”

Diop’s most heinous attackers have made it crystal clear that this isn’t about the specific person playing Starfire, but rather about how a black woman, any black woman, shouldn’t be Starfire. It’s not a critique; it’s flagrant racism. And Diop now feels unsafe on social media because of these attacks.

This sort of abuse didn’t start with Titans. It won’t end with Titans either.

Actors, no matter the color of their skin or their gender, are frequently subject to criticism when they sign on to play iconic comic book characters, mostly for not being perceived to have the skill or look to embody a character that fans have grown up with. We saw it with Ben Affleck and Batman and Jared Leto as the Joker.

For women, this criticism tends to be strongly tied to their appearance. When Gal Gadot was cast as Wonder Woman, there was a pervading whisper that she was too skinny and frail to play the Amazon princess. Implicitly, those haters were saying that Gadot wasn’t voluptuous enough to fill out Wonder Woman’s costume.

But what’s happening to Diop is different from what Affleck and Leto faced, and it’s even uglier than the awful body-shaming that Gadot was subjected to. Because critiques about what Diop looks like as Starfire involve the color of her skin, inviting hateful, racist vitriol from what Diop’s Titans co-star Minka Kelly called “racist cowards.”

On Thursday, in the midst of the attacks on Diop and her social media lockdown, Kelly came to her defense, writing on Instagram:

That so many racist cowards would take the time to attack her instagram so that she has to shut off comments after having already shut down her entire account once before over this bullshit makes me feel rage … It takes zero courage to sit in your dark lonely room spewing your venom online while protected by your anonymous faceless accounts. I cannot begin to fathom the courage it requires everyday just to exist as a black woman in this country (#ChikesiaClemons) let alone to also have the audacity to fight for and follow your dreams. I bow to you, Anna.

I would like to take a moment to acknowledge how proud and excited I am to be working alongside @The_AnnaDiop. In my humble opinion, @DCUTitans, @theDCuniverse and all of their fans are lucky to have her talent, her grace and her beauty on board. While the abhorrent racism in this country seems to be going nowhere anytime soon (#NiaWilson), the dignity, strength and couth my friend continues to exemplify in the face of it humbles and inspires me. That so many racist cowards would take the time to attack her instagram so that she has to shut off comments after having already shut down her entire account once before over this bullshit makes me feel rage. Though I also feel a small relief knowing how strong and thick-skinned Anna is. I know she is and will be ok. It takes zero courage to sit in your dark lonely room spewing your venom online while protected by your anonymous faceless accounts. I cannot begin to fathom the courage it requires everyday just to exist as a black woman in this country (#ChikesiaClemons) let alone to also have the audacity to fight for and follow your dreams. I bow to you, Anna. I can’t wait for everyone to see the brilliant work you’ve done. Shine on, my love. You are a queen and all the people who matter know it. #IStandWithAnnaDiop ✨

Fans have also united to lend their support to Diop online, encouraging her to stay strong.

Perhaps the saddest thing about the spew of abuse that Diop has endured is that it’s just one instance of a recurring pattern. Last week, when Netflix’s redesign of She-Ra was unveiled, toxic fans bemoaned that the reimagined character wasn’t “pretty” or feminine enough, and proceeded to attack showrunner Noelle Stevenson. Last month, Star Wars’ Kelly Marie Tran deleted her Instagram after months of racist harassment from so-called “fans.”

The people attacking these women are predominantly men who believe themselves to be the truest disciples of the original characters and/or franchises. The very worst of them seem to also be the most ardent fans of misogyny, homophobia, and racism. This pattern of attacks based on gender, race, and sexual orientation is upsetting not only for the trauma it inflicts on its individual targets but for the potential it has to stifle pop culture’s slow evolution toward greater representation for people who aren’t white men.

How a red state might hike taxes on the rich to give teachers a raise
Paul Krugman on climate, robots, single-payer, and so much more
Stephen Bannon Has No Business In The White House
Border Patrol chief: Number of migrant family separations could double
Dylan Scott answers 9 key questions about universal health care around the world
Millions of N95 masks keep surfacing. So why is there still a shortage?