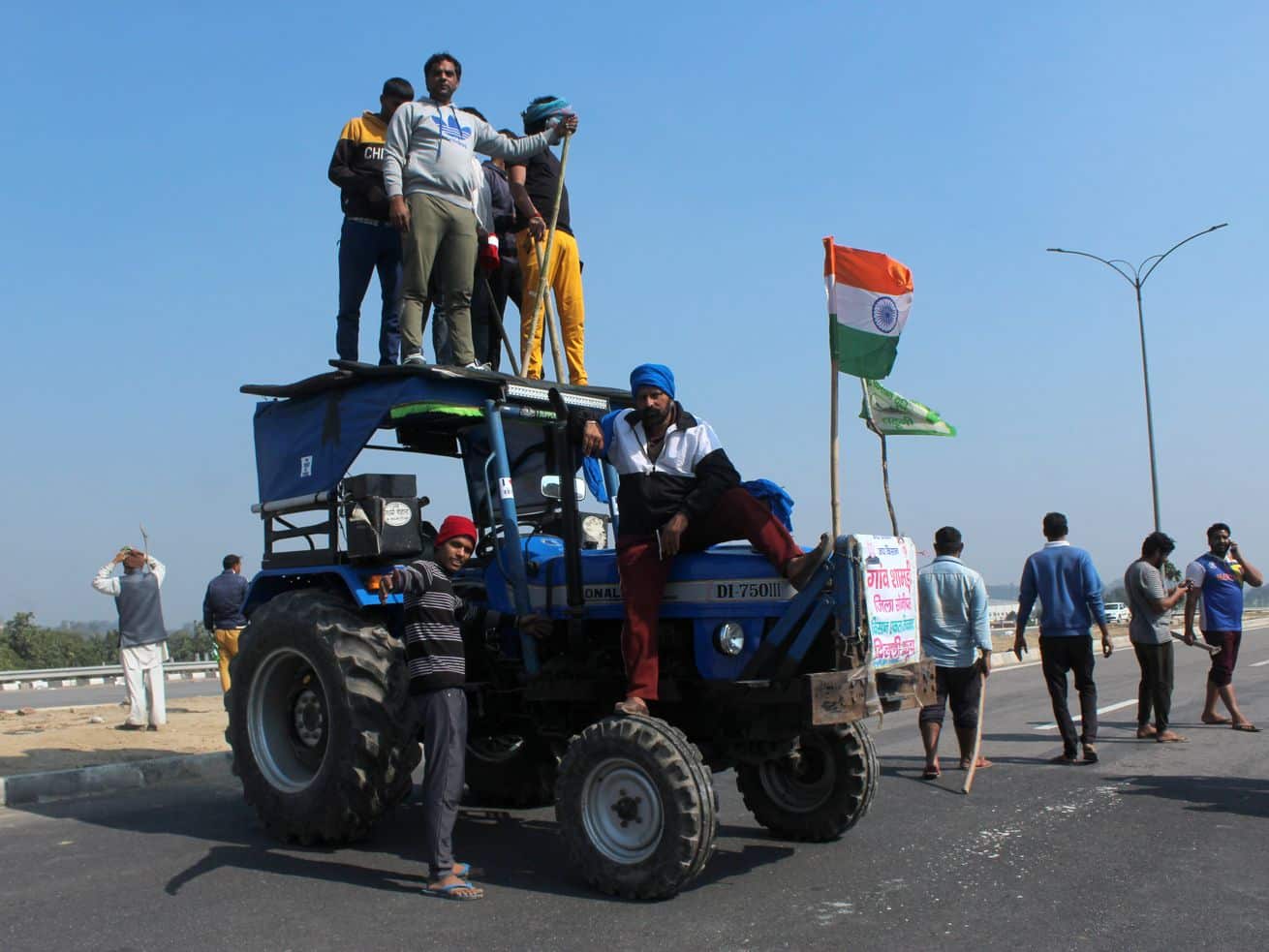 The farmers argue the new laws will aid big business, and take away their livelihoods.

Tens of thousands of farmers blockaded main roads across India on Saturday in a continuation of a months-long protest movement against new agricultural policies they say will empower corporations and devastate them financially.

The continued demonstrations indicate that protest energy remains strong, as the government and farmers remain locked in a stalemate after several rounds of talks between them failed to produce any major breakthroughs.

Protestors used tractors, trucks, tents, and boulders to block roads during a three-hour “chakka jam,” or road blockade, across the country, according to Reuters.

Blockades were set up at over 10,000 sites across India on Saturday, according to Avik Saha, a secretary of the All India Kisan Sangharsh Coordination Committee, a federation of farmer groups.

“We will keep fighting till our last breath,” Jhajjan Singh, an 80-year-old farmer at a protest site in Ghazipur, told the Guardian. He said that India’s prime minister, Narendra Modi, “should know that either he will remain or we will.”

Tens of thousands of police were deployed across the country to deal with the protests. While the farmer demonstrations have been largely peaceful, on January 26, a group of protesters peeled off from a demonstration route and fought with police officers in Delhi, an incident which resulted in hundreds of injuries and the death of a protester.

Farmer leaders condemned the violence, but security has ramped up since then. According to the Guardian, police have added iron spikes and steel barricades around protest sites to prevent farmers from entering the capital.

Why the protesters are mobilizing

As Vox’s Jariel Arvin explained in December, while the government says this is necessary to modernize the economy, protesters argue that it will only intensify their economic precarity:

But the protesting farmers aren’t convinced. Although the government has said it will not drop minimum support prices for essential crops like grain, which the Indian government has set and guaranteed for decades, the farmers are concerned they will disappear. Without them, the farmers believe they will be at the mercy of large corporations that will pay extremely low prices for essential crops, plunging them into debt and financial ruin.

“Farmers have so much passion because they know that these three laws are like death warrants for them,” Abhimanyu Kohar, coordinator of the National Farmer’s Alliance, a federation of more than 180 nonpolitical farm organizations across India, told me in an interview. “Our farmers are doing this movement for our future, for our very survival.”

The protests have garnered sustained international attention, in part because of their sheer size. As Reuters notes, although farming accounts for only about 15 parent of India’s GDP, about 50 percent of the country’s workers are farmers — and hundreds of millions of farmers have taken part in street demonstrations and strikes since last fall.

Experts say that the government’s attempt to change farming policy has touched a third rail in Indian politics, revealing tensions created by modernization while threatening to unravel market norms for farmers that have been in place for decades.

Since the 1970s, an elaborate system of agricultural subsidies and price guarantees, organized through a system of marketplaces known as mandis, has been a central feature of agricultural policy in India, and, as Arvin noted, have essentially helped provide farmers with a kind of safety net.

Aditya Dasgupta, an assistant professor of political science at the University of California, Merced specializing in the politics of India, says those policies are the product of large-scale mobilization by farmers, agrarian unions, movements, and parties which became politically powerful during the Green Revolution, the country’s enormous leap in agricultural productivity, which took place in the 1970s and ’80s.

“The farmers’ protests today hark back to that tradition of protest and display of agrarian power, but the context is very different,” Dasgupta told me. “India is urbanizing, agriculture accounts for a shrinking share of GDP, and the main source of political-economic support for the ruling BJP party comes from urban big business.”

“So, in a sense, this is not just a conflict about specific policies, but also a larger flashpoint about the sectoral basis of political power, and whether or not farmers remain a politically powerful interest group as India urbanizes,” he said.

While it’s unclear what kind of compromise or concession might dial down tensions regarding the current reforms, experts like Dasgupta point out that the underlying dynamics that gave rise to them — questions over who should hold power in India’s evolving economy — are likely to remain in the long term.

Closed schools and empty stadiums: How countries are trying to stop coronavirus’s spread
Trump just ended HealthCare.gov in Georgia
Covid-19, explained by Carl (who has it)
House Democrats will keep their majority for two more years
Watch: Margot Robbie’s Harley Quinn takes center stage in the trailer for Birds of Prey
Trump wants you to believe coronavirus cases are “up because we TEST.” He’s wrong.