Terminator: Dark Fate is all about the kickass ladies 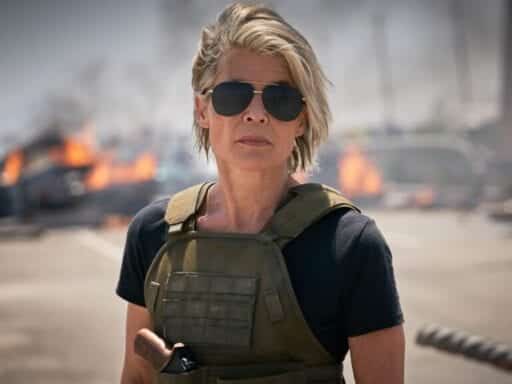 The latest in the franchise takes a close look at its roots — and challenges them.

Either by design or stroke of luck, the Terminator franchise is set up brilliantly for logically explainable reboots. This isn’t a Hulk or Fantastic Four situation, where you just start all over again. In the time-traveling Terminator world invented by James Cameron in 1984, movies can easily be both sequels and reboots.

Terminator: Dark Fate is the sixth movie in the series, not counting various forays into TV and web series. But it’s a direct sequel only to the second film, 1991’s Terminator 2: Judgment Day, in which Sarah Connor (Linda Hamilton) managed to prevent Skynet, the insidious artificial intelligence that turns on its human creators and wages war upon them, from ever being created. Terminator 3: Rise of the Machines, released in 2003, twisted back on T2, saying that Skynet’s creation was not prevented, just delayed. 2009’s Terminator Salvation continued that story, while in 2015, the reboot Terminator Genisys told a story of an entirely alternate future.

But Dark Fate essentially writes out post-T2 history and returns to basics, bringing back both Hamilton and Arnold Schwarzenegger as well as a new cast and a Skynet-free storyline. If you’ve never seen any other Terminator movie, this one will still make some sense. But it’s definitely a Terminator movie for people who are nostalgic for the old Terminator films, the ones with the famous lines (“I’ll be back”) and famous sunglasses. (Those are Gargoyles ANSI Classics, if you were wondering.)

And in the hands of Deadpool director Tim Miller, Dark Fate by and large pulls off recapturing the goofy fun of the original, though with a twist. It evokes the earliest Terminator films, but Dark Fate doesn’t want to just rewrite Terminator’s future — it wants to reevaluate its past, too.

Terminator: Dark Fate is a movie with lots of surprises, but it remains familiar

A big, important thing happens right at the start of Dark Fate, which I won’t spoil. But without removing the element of surprise, I can say that Dark Fate focuses on Dani Ramos (Natalie Reyes), a young Mexican woman who discovers, quite accidentally and to her chagrin that Grace (Mackenzie Davis) has been sent back from the future to protect her.

Grace is not a Terminator, but she is not exactly human either — she’s been “enhanced,” which makes her strong when she’s attacking Terminators and other threats but more vulnerable when she gets worn out. (How she got this way is revealed via flashbacks — or flash-forwards, depending on how you look at it.)

Grace and Dani end up in the path of Sarah Connor (Hamilton), who’s spent her life hunting and taking out Terminators. But in order to confront the newest threat to humanity, the three women must team up with whoever has been sending Sarah text messages with the locations into which Terminators will drop. This requires a trip across the border into the US — not safe, especially since Dani has no visa — and puts them in the path of, you guessed it, the original Terminator (Schwarzenegger, who is grizzled and grey; apparently Terminators age?). And along the way, they learn some startling truths about the past and the future.

Men have been centered in the Terminator series, but this was always the women’s story

Though it boasts some beautifully shot action scenes, Dark Fate also has some really muddy ones, which makes it a tad frustrating to want. And the story makes some chin-scratching narrative choices, too. For instance, one pivotal fight scene happens in a detention facility along the US-Mexico border — not because it really has anything to do with immigration or the human rights crisis at the border but because that’s just where the people involved happen to be. There’s an argument to be made for the matter-of-factness of that choice, that these detention facilities are just part of all of our lives now, but they aren’t; they’re a harsh reality for people who are caught up in a system that’s fraught with political and humanitarian implications, and so the decision to set part of the movie at the border feels glib.

The screenplay boasts, in the manner of many Hollywood franchise blockbusters, a whole lot of screenwriters. There are eight credits spread among six men, along with five “story by” credits (including James Cameron himself) and three more screenplay credits. And somewhere along the way, someone noticed that the original Terminator film, despite having one of the greatest female action stars at its center in Sarah Connor, was still surprisingly man-centric. Sarah Connor wasn’t important because of herself but because she was the future mother of John Connor, the man who would save the world. Which seemed pretty natural in 1984. Although Sarah has always remained important to Terminator mythology, she’s been more of a Mother Mary figure (albeit a very ass-kicking one) than a savior herself. It’s her son that matters.

This sequel-reboot gives the writers a chance to undercut those expectations and inject some life into the series, something that’s always good after years of wallowing in stagnation. (The post-T2 box office returns have varied but tended to trend downward, and that’s not even adjusting for inflation.) As Dark Fate points out, women have always been central to the Terminator story, and one woman in particular: Sarah Connor. Linda Hamilton is awesome in Dark Fate; she’s the reason to see the movie. But there’s room in the story for many more women, particularly since the movie suggests that while mankind will always want to destroy itself, womankind might have some new ideas about living.

In some ways, Dark Fate is reminiscent of 2018’s wildly successful Halloween sequel-reboot, which ignored plenty of the films in the franchise but succeeded partly by bringing back Jamie Lee Curtis, star of the early films, and making her the heroine along with her daughter and granddaughter. In Halloween, the women work together to take out the biggest menace to their survival. In Dark Fate, they do much the same thing. And Dark Fate makes it very clear that you don’t have to be the mother of the savior of mankind to be worth saving. In fact, you might just be the savior yourself.

Judge stays Kentucky’s fetal heartbeat bill, keeping the state’s lone abortion clinic open — for now
How to help people during the pandemic, one Google spreadsheet at a time
The rapid development of AI has benefits — and poses serious risks
What happens next in the coronavirus outbreak? We mapped 8 scenarios.
The first full trailer for Disney’s live-action Aladdin had so many hurdles to overcome
Protests for Black lives are still happening