The 11-day teachers’ strike in Chicago paid off 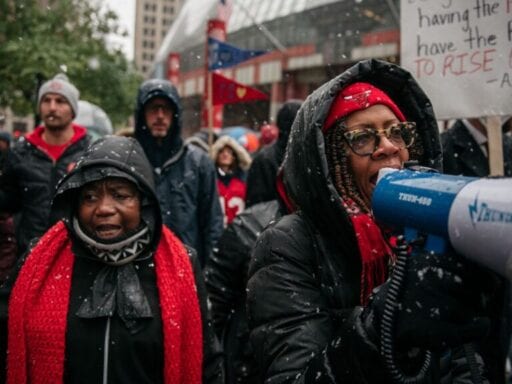 Share
Loading...
Facing snow and cold temperatures, thousands marched through the streets near City Hall during the 11th day of the teachers strike on October 31, 2019, in Chicago. | Scott Heins/Getty Images

It got more than $30 million extra spending for public schools.

Thousands of Chicago public school teachers are back in class.

Teachers returned to school Friday after going on strike for 11 days. They had picketed in the snow and rain until union leaders and city officials struck a deal to raise teacher pay and to put a social worker and nurse in each school. Some of the teachers’ most ambitious proposals, such as requiring the city to expand affordable housing, didn’t make the cut.

“Did we accomplish every single little thing? No. But I can say that we moved the needle on educational justice in the city,” Jesse Sharkey, president of the Chicago Teachers Union, said in a press conference Thursday.

The district also committed to spending $35 million to shrink oversized classrooms and to prioritize schools that serve the most at-risk students. The deal includes a 16 percent pay raise for teachers over five years, and a remarkable 40 percent raise for teaching assistants, clerks, and other lower-paid workers. The new, five-year contract will also boost investment per pupil and reduce the number of students in each class.

Teachers had wanted more, though. They also wanted more affordable housing in the city for students and teachers. That’s something no teachers union has demanded in recent contract negotiations.

These kinds of broad demands are part of a growing movement, led by teachers and labor unions, focused more on social justice issues affecting their communities than simply pay. It’s known as “bargaining for the common good.”

The success of this bargaining model in Chicago and other cities has been mixed so far. Mayor Lori Lightfoot promised to focus on affordable housing, but not as part of contract negotiations with teachers. The union did, however, get the city to give sanctuary protection to undocumented immigrants on school property. The final deal shows that strikes work. Chicago teachers didn’t get everything they wanted, but they got got more than ever before, including an extra $30 million in spending on education.

Lightfoot made national headlines in May when she became the city’s first black, female mayor. Within months, she had to start negotiating with the teachers union as their last contract was about to expire.

Lightfoot had promised during her campaign to boost investment in neighborhood schools; She pledged to add hundreds of social workers, special education case managers, and nurses at schools within the next five years, according to the education news site Chalkbeat.

But teachers were frustrated that she wouldn’t put it in writing — in their contract. After they went on strike, it was included: The contract guarantees that social workers and nurses will not be outside contractors, and the school has committed to investing millions of dollars in training for current and new support staff.

But the fight between teachers and the city was about much more than that.

Illinois’s finances are doing much better than they were in 2012 when the teachers last went on strike. The state’s budget was in the red back then; it was a full-blown financial crisis by 2016. While the city still owes creditors millions of dollars, more state money is flowing to Chicago public schools, which serve a majority of high-poverty neighborhoods.

Chicago saw a surge in tax revenue last year, and teachers want part of the $181 million surplus to go toward hiring more teachers and nurses, and to more social services. That’s why they were demanding an investment in affordable housing — an unusual request from teachers during bargaining talks.

Housing is a crucial issue in Chicago, where black residents have been hurt by historic segregation, disinvestment in their communities, and a growing affordable-housing crisis. Lightfoot says she wants to address affordable housing in the city, but she doesn’t want that to be part of a contract with teachers.

“Affordable housing is a critical issue that affects residents across Chicago, and everyone’s voices need to be heard during this process,” Mayor Lightfoot said in a statement last month. “As such, the [teachers union] collective bargaining agreement is not the appropriate place for the City to legislate its affordable housing policy.”

But teachers were confident that they could get what they wanted, and they had reason to think so.

A wave of teachers strikes has proven successful

But progressive states weren’t immune to the unrest, even though they tend to pay teachers higher salaries.

When tens of thousands of teachers went on strike in Los Angeles in January, it was a sign that the movement had expanded beyond the red states where it began and could lead more progressive cities and states to reexamine their investment in public education, too. As part of the deal to end the strike, LA teachers were able to negotiate smaller class sizes and the district agreed to hire more nurses, guidance counselors, librarians, and support staff.

That’s what “bargaining for the common good” looks like. It’s a strategy that seems to pay off. LA teachers inspired Chicago teachers to fight for similar gains — and got most of them.

“Do something”: why Bill de Blasio is facing criticism for the Eric Garner case
Disneyland is closing amid Covid-19 fears
“This dynamic is immortal:” Why OK boomer is much more complicated than the meme
America’s top election official explains why Trump may be committing crimes
What we know about a shooting at a White Settlement, Texas church
Trump’s goal of keeping out low-income immigrants just got a big boost from the Supreme Court