The 11 most-read Future Perfect articles of 2019 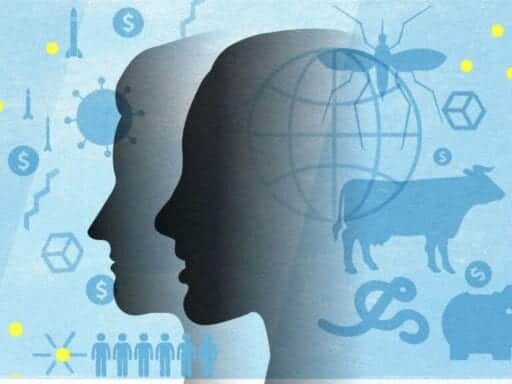 Our best of the year, from meatless meat to global warming to the rise of artificial intelligence.

2019 was the first full year of Vox’s Future Perfect. And it was an incredibly momentous year for our section: We brought on Sigal Samuel who quickly became an indispensable voice on AI, animal issues, and religious toleration, we premiered season two of the Future Perfect podcast, and we published hundreds of articles.

Here are the most read of those 2019 pieces. I’m focusing here on stuff written by the core Future Perfect team (Kelsey Piper, Sigal Samuel, and me); there were also some amazing pieces from other teams at Vox (like this project on what practices will be considered unthinkable in 2070, or Brian Resnick’s essay on intellectual humility) that I’m leaving off.

1. “Meatless meat is becoming mainstream — and it’s sparking a backlash” by Kelsey Piper

Kelsey’s recap of the pushback against Impossible Burgers and other meatless meat products from organic food advocates, who argue these meat alternatives are too processed, was our most-read story of the year, and deservedly so. It’s a great explainer that is generous toward critics of fake meat, while making it clear that they’re holding these products to a standard that factory-farmed meat could never itself reach.

Our second-most popular story was about the major event that prompted the meatless meat backlash: Burger King introducing an Impossible Burger-based Whopper, which in one fell swoop made the product accessible at an affordable price to consumers the world over. It was a momentous decision by Burger King, and Sigal does a great job explaining how important one vendor’s adoption of meatless meat was to the mainstreaming of plant-based alternatives to factory faring.

3. “Every Burger King in the country will have meatless Whoppers by the end of the year” by Sigal Samuel

Kelsey and Sigal were tireless in covering the meatless meat beat this year, and you all were very eager to learn more about it!

For years I’ve wondered about how to broach the topic of wild animal welfare to a general audience. The notion that it might, in some important moral sense, be bad that gazelles suffer when eaten by lions seems preposterous to many people, almost like a reductio ad absurdum of veganism and animal rights.

So you can imagine how happy I was when the world’s most perfect gateway story for a frank discussion of wild animal welfare appeared: a story of one Arkansas man who needed an assault weapon to mow down the 30-50 feral hogs menacing his small children.

The man, William McNabb, tweeted his complaint to a natural authority figure with influence on this policy issue — former Drive-By Truckers guitarist Jason Isbell — and sparked a nationwide discussion of how, exactly, to deal with all these goddamn feral hogs.

5. “The post-antibiotic era is here” by Sigal Samuel

35,000 Americans die every year from antibiotic-resistant bacterial infections, roughly the same number who die from guns or car crashes. Sigal explained clearly the extent of the problem, and what’s needed to fix it — which isn’t that much, in terms of government policy and spending.

6. “Women suffer needless pain because almost everything is designed for men” by Sigal Samuel

One of the many reasons I love having Sigal on our team is that she constantly highlights areas of unnecessary suffering that could be easily averted but which were invisible to me, due to my own blinders and biases.

7. “The radical plan to change how Harvard teaches economics” by Dylan Matthews

I’m going to be honest — I didn’t want to write this piece at first. It felt too parochial, too specific to one university and one economist — but it appears my worries were unfounded. Harvard’s Raj Chetty is hugely influential, and getting economic research and education right is key to alleviating human suffering in areas from climate change to poverty alleviation to global health. And Chetty is engaged in a fascinating effort to shift the econ curriculum to be more immediately relevant to those projects, and more empirical to boot.

If Sigal owned the story of the rise of meatless meat, Kelsey owned the story of the backlash against it — in this case highlighting a legislative effort to make it harder for meat alternatives to gain market share. (Mississippi later reversed itself, but tellingly our story about that didn’t do as well. The people love outrage!)

You know what’s a great show? The Shield. It’s about an extremely corrupt anti-gang police task force in LA and as I’ve been rewatching it recently, I can’t stop thinking about this interview Sigal did with sociologist David Brotherton. He has found that Ecuador’s decision to legalize and register gangs, so they can get grants and offer social programming, yielded incredible dividends relative to the American approach of brutal raids targeting young men of color. “Previously violent Latin Kings were working in everything from catering to crime analysis,” Sigal writes. Truly the dream!

10. “An AI learned to play hide-and-seek. The strategies it came up with on its own were astounding.” by Kelsey Piper

Kelsey is, I think, one of the best journalists in America on the topic of AI alignment: how hard it is for humans to predict and regulate AI’s behavior so it aligns with human morality.

Here she illustrates the problem with a hide-and-seek playing AI from the lab OpenAI, which is a brilliant example of the general problem: quickly, the hiders in the game learned to build defensive shelters out of their environments, and then seekers learned to break into those shelters, and then hiders learned to freeze objects so that those raids didn’t work.

”Solving problems with reinforcement learning leads, as we’ve seen, to lots of unexpected behavior — charming in a game of hide-and-seek, but potentially alarming in a drug meant to treat cancer,” Kelsey sums up.

11. “Is climate change an ‘existential threat’ — or just a catastrophic one?” by Kelsey Piper

This was my favorite Kelsey piece of last year, and I’m glad it was one of you all’s as well. At a time when casual proclamations that climate change is going to “kill us all” or “make Earth uninhabitable,” Kelsey was able to cut through the rhetoric and nail down exactly what kind of risk climate change poses. The risk isn’t extinction — but it’s extremely dire nonetheless.

Joe Biden has a chance to make history on climate change
The Supreme Court just rejected a Republican effort to make it harder to vote
Tokyo 2021? The decision to postpone the Summer Olympics, explained.
Let’s think twice about Tiger King
The RNC weaponized exhaustion
At last, a climate policy platform that can unite the left