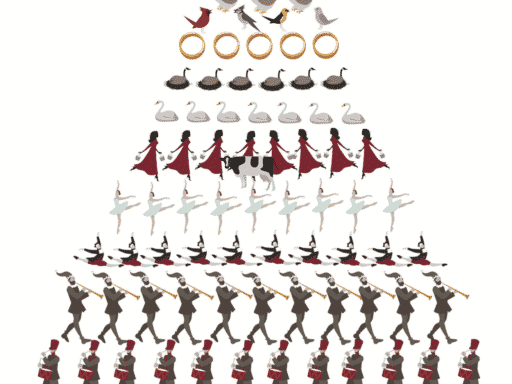 It might seem unbelievable given that the “Christmas creep” now begins before Halloween, but the true Christmas season actually starts on Christmas Day itself. That’s right: December 25 marks the official start of the 12 days of Christmas, the Christian tradition that shares its name with a relentlessly stick-in-your-head Christmas carol.

Here are a few things you may not know about the song and the season.

What are the 12 days of Christmas?

The 12 days of Christmas is the period that in Christian theology marks the span between the birth of Christ and the coming of the Magi, the three wise men. It begins on December 25 (Christmas) and runs through January 6 (the Epiphany, sometimes also called Three Kings’ Day). The four weeks preceding Christmas are collectively known as Advent, which begins four Sundays before Christmas and ends on December 24.

Some families choose to mark the 12-day period by observing the feast days of various saints (including St. Stephen on December 26) and planning daily Christmas-related activities, but for many, after December 25 things go back to business as usual.

“The 12 Days of Christmas” is also a Christmas carol in which the singer brags about all the cool gifts they received from their “true love” during the 12 days of Christmas. Each verse builds on the previous one, serving as a really effective way to annoy family members on road trips.

The version most people are familiar with today begins with this verse:

On the first day of Christmas,

my true love sent to me

A partridge in a pear tree.

The song then adds a gift for each day, building on the verse before it, until you’re reciting all 12 gifts together:

The history of the carol is somewhat murky. The earliest known version first appeared in a 1780 children’s book called Mirth With-out Mischief. (A first edition of that book sold for $23,750 at a Sotheby’s auction in 2014, but you can also buy a digital copy on Amazon.) Some historians think the song could be French in origin, but most agree it was designed as a “memory and forfeits” game, in which singers tested their recall of the lyrics and had to award their opponents a “forfeit” — a kiss or a favor of some kind — if they made a mistake.

Many variations of the lyrics have existed at different points. Some mention “bears a-baiting” or “ships a-sailing”; some name the singer’s mother as the gift giver instead of their true love. Early versions list four “colly” birds, an archaic term meaning black as coal (blackbirds, in other words). And some people theorize that the five gold rings actually refer to the markings of a ring-necked pheasant, which would align with the bird motif of the early verses.

In any case, the song most of us are familiar with today comes from an English composer named Frederic Austin; in 1909, he set the melody and lyrics (including changing “colly” to “calling”) and added as his own flourish the drawn-out cadence of “five go-old rings.”

The song is not a coded primer on Christianity

A popular theory that’s made the internet rounds is that the lyrics to “The 12 Days of Christmas” are coded references to Christianity; it posits that the song was written to help Christians learn and pass on the tenets of their faith while avoiding persecution. Under that theory, the various gifts break down as follows, as the myth-debunking website Snopes explained:

4 Calling Birds = the Four Gospels and/or the Four Evangelists

5 Golden Rings = The first Five Books of the Old Testament, the “Pentateuch,” which gives the history of man’s fall from grace.

7 Swans A-swimming = the seven gifts of the Holy Spirit, the seven sacraments

9 Ladies Dancing = the nine Fruits of the Holy Spirit

The partridge in the pear tree, naturally, represents Jesus Christ.

This theory seems tailor-made for circulation via chain emails, but it actually makes little sense once you examine it. Snopes has a great explanation of the many, many holes in its logic. The most egregious: First, the song’s gifts have nothing to do with their Christian “equivalents,” so the song is basically useless as a way to remember key pillars of the faith. And second, if Christians were so restricted from practicing their faith that they had to conceal messages in a song, they also wouldn’t be able to celebrate Christmas in the first place — much less sing Christmas carols.

The late historian William Studwell, known for his Christmas carol expertise, also refuted the coded message idea. As he told the Religion News Service in 2008:

This was not originally a Catholic song, no matter what you hear on the Internet. … Neutral reference books say this is nonsense. If there was such a catechism device, a secret code, it was derived from the original secular song. It’s a derivative, not the source.

Sorry to spoil your dinner party fun fact; while I’m at it, I might as well tell you “Ring Around the Rosie” isn’t about the Black Plague, either.

Giving someone all the gifts in the song would be … pricey

To calculate the cost of all the gifts in “The 12 Days of Christmas,” I’ll turn to the PNC financial services group’s annual Christmas Price Index, which PNC has been putting out since 1984 (and which occasionally makes its way into school lesson plans). The index calculates the cost of all the gifts in the song based on current market rates; the total for 2019, the most recent year for which numbers are available, comes to a hefty $38,993.59, or $170,298.03 if you count each mention of an item separately (which would amount to 364 gifts in all) — up a mere 0.2 percent from 2018.

The takeaway: Swans are damn expensive (at $1,875 each, or $13,125 for all seven) but at least stayed the same price as 2018, while the cost of the five gold rings ($825 total) increased 10 percent. No matter the cost, though, actually giving someone all this stuff is probably not a great idea; just think of all the bird poo.

Are there any other versions of “The 12 Days of Christmas”?

The structure of “The 12 Days of Christmas” lends itself easily to parodies, of which there have been many. There’s Jeff Foxworthy’s redneck version, Twisted Sister’s heavy metal take, and, of course, a Muppets version (featuring John Denver):

There’s also a 12 Days of Christmas diet of sorts, which the Atlantic’s Olga Khazan attempted in 2013. She calculated the calories in a serving of each bird mentioned in the song, and offset them with the calories burned by the various activities (milking, leaping, etc.). Turns out all that poultry is somehow less indulgent than the typical American holiday meal. She sums up:

If you ate all of the birds in one day, including the pheasant pie, but not including all the trimmings for the other dishes, and subtracted the energy you expended milking, dancing, leaping, and drumming, you’d have consumed 2,384 net calories. That’s really not bad, considering the average American Thanksgiving dinner adds up to about 4,500 calories.

It seems even more reasonable, relatively speaking, when you consider that if you wanted to burn off your meal by just singing its namesake tune, you’d have to make it all the way through roughly 300 times — about 17.5 hours of caroling. And that’s a gift we doubt anyone would welcome.