The 12 most anticipated books of the fall, according to Goodreads 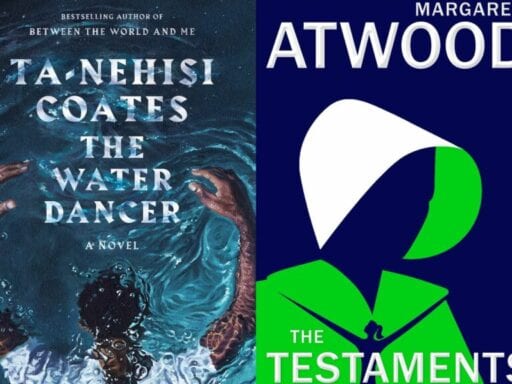 A Handmaid’s Tale sequel and an anticipated debut: Here’s your fall reading, chosen by Goodreads.

I always relish the back-to-school feeling that comes with the cusp of fall. Labor Day passes, and all I want to do is sharpen my No. 2 pencils and put on a plaid blazer like the Rory Gilmore parody I aspire to be.

But a key element of the back-to-school feeling is the desire to sit down with a really good book. And luckily, fall makes that easy to do, because fall is prestige book season. It’s the publishing equivalent of Oscar season in the film world: Fall is when all of the biggest authors in the business release their new books because they want their books to be fresh in the public’s mind when it’s time to buy holiday presents. So to help us all plan for the glut of good reading that is soon to descend upon us, I called up the nice people at Goodreads and asked them to tell me which fall books their users are most excited about.

Goodreads is a website where obsessive readers can track what they’ve already read and what they want to read, and share their personal ratings and reviews. Goodreads compiled the list below by analyzing the number of times its 90 million members have added a title to their “Want to Read” shelves. That means the list reflects the makeup of Goodreads users, who tend to skew young and female: You’ll see a fair amount of women’s fiction listed below, along with literary fiction and thrillers and fantasy.

Here are the 12 new books that the devoted book lovers of Goodreads are most looking forward to reading this fall, listed in order of release date.

The Testaments (The Handmaid’s Tale #2) by Margaret Atwood

Margaret Atwood’s 1985 novel The Handmaid’s Tale was a big beneficiary of the “now more than ever” post-2016 dystopia boom: It got adapted into a Hulu show and has acquired newfound associations of relevance in the era of Donald Trump’s presidency. This sequel takes place 15 years after The Handmaid’s Tale ended — but beyond that, details are thin on the ground. (I have tried to find stuff out for journalism reasons and every time I write to the nice representative at Atwood’s publisher he politely explains to me that he’ll be fired if he tells me literally anything about this book. We’ll all find out together in September!)

Talking to Strangers: What We Should Know about the People We Don’t Know by Malcolm Gladwell

Malcolm Gladwell writes hugely influential (if slightly oversimplified) popular science books about human behavior: about what makes us make up our minds about each other, or about what makes some people geniuses. Talking to Strangers aims to tell us why we are so very bad at reading other people — and to keep us from acting on the incorrect assumptions we make about people when we first meet them.

The Ten Thousand Doors of January by Alix E Harrow

This debut fantasy set at the beginning of the 20th century involves a mansion filled with peculiar treasures, a lonely young girl who lives there, a mysterious book, and a door to another world. Lots of magic, and a bit of romance too.

Red at the Bone by Jacqueline Woodson

Jacqueline Woodson, who has won both the Newbery Honor Award and the National Book Award, writes right along the border of poetry and prose: Her language is as elliptical and dreamy as poetry, but it’s always grounded in story and character, like prose. Red at the Bone is a family story that is sparked by an unexpected teenage pregnancy, simultaneously unspooling backward and forward in time.

The Water Dancer by Ta-Nehisi Coates

Ta-Nehisi Coates became a household name with his 2014 Atlantic article “The Case for Reparations”; his 2015 nonfiction book Between the World and Me won the National Book Award and was a finalist for the Pulitzer. The Water Dancer is his first novel, about an enslaved man gifted with a mysterious power and struggling to reunite with his lost family. Not every great essayist makes for a great novelist, but Coates, who was a poet before he became an essayist, has always been celebrated as much for his lyrical language as for his clear and forceful ideas. Expectations are high for this one.

Leigh Bardugo is a New York Times bestselling fantasy author. With Ninth House, she introduces us to a high school dropout who narrowly survives a murder attempt and then gets recruited from her hospital bed to go undercover at Yale and monitor their exclusive secret societies for an unnamed benefactor. Spoiler alert: The secret societies turn out to be up to their elbows in the dark and the occult.

The Giver of Stars by Jojo Moyes

Jojo Moyes built her name on contemporary women’s fiction — she’s best known for Me Before You, which became the 2016 Emilia Clarke movie of the same title — but The Giver of Stars is historical. It’s based on the true story of horseback-riding librarian women in Depression-era Kentucky, and from those two sentences alone you should already know if this book is for you or not.

Elizabeth Strout’s Olive Kitteridge, a novel in stories about an abrasive middle-aged woman living in a coastal Maine town, won the Pulitzer in 2008 and became an HBO miniseries starring Frances McDormand in 2014. Olive, Again returns to Olive and the town of Crosby to do what Strout does best: find meaning in the tiniest and most mundane details of everyday life.

Ali Wong blasted into the public consciousness in 2016 with her raunchy Netflix comedy special Baby Cobra, and then earlier this year she taught us all that she can also do sweet when she released Always Be My Maybe, the romantic comedy she wrote and starred in. Dear Girls aims to straddle the line between those two modes: It’s written in the form of a series of letters to Wong’s daughters that sees Wong sharing her hardest-won wisdom of the world.

Find Me (Call Me By Your Name #2) by André Aciman

André Aciman’s 2008 novel Call Me By Your Name — which got a huge boost in name recognition from its 2017 film adaptation — has two parts. First, there’s a single golden summer between two young lovers, Elio and Oliver. Second, there’s their bittersweet reunion 15 years after the events of that first summer, and then again 5 years after that. Find Me fits in between those two parts, beginning 10 years after the summer of Call Me By Your Name and then picking up in a new section 15 years later. It’s an exploration of first love and the way it reverberates through our lives decades after it’s ended.

The Starless Sea by Erin Morgenstern

Erin Morgenstern’s first book The Night Circus was the biggest and buzziest book of the year when it came out in 2011. Eight years later, her follow-up, The Starless Sea, promises to be just as twisty and fantastical. It’s a quest fantasy that involves masquerade parties in New York City and ancient subterranean libraries, and you’re either down for that sort of thing or you aren’t.

Why SoFi would be interested in buying naming rights to the LA football stadium
Money Talks: The father and son running a coffeehouse together
The 2020 Democratic National Convention’s speaker lineup and how to watch
Trump’s Super Bowl interview was eight minutes of pettiness and empty braggadocio
Surgical gowns cost my hospital 40 cents before the pandemic. Now they’re $9.
The geoengineering question