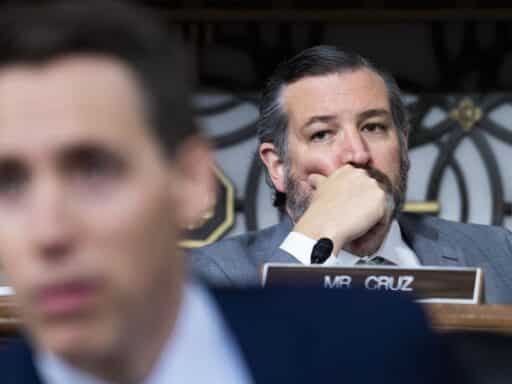 On January 6, Congress is scheduled to certify the Electoral College vote.

In defiance of all available evidence, the American constitutional process, and long-held democratic norms, 14 Republican senators have announced they will object to that certification. One of them, Sen. James Lankford (R-OK), has since reversed course in a statement reading: “Our Constitution and the law requires that I accept the states’ final decision on an election.”

The 13 senators who still intend to object ultimately won’t succeed, but it’s a definite escalation from what had largely been cheap talk from Republicans still backing the president’s repeated attempts to overturn the results of the 2020 presidential election.

Though President Donald Trump had large swaths of the GOP backing him in his earlier efforts to cast doubt on President-elect Joe Biden’s victory and litigate the results, the latest (and last-ditch) effort to focus on Congress’s certification vote began with Sen. Josh Hawley. On December 30, Hawley released a statement saying he “cannot vote to certify the electoral college results” allegedly due to his belief that “some states, particularly Pennsylvania, failed to follow their own state election laws.” He also accused Facebook and Twitter of having interfered in Biden’s favor (Hawley has made a name for himself crusading against Big Tech).

Three days later, 11 other senators led by Sen. Ted Cruz announced that they would “reject the electors from disputed states” unless an “emergency 10-day audit” of the election results was completed. Their argument largely rests on the fact that lots of people have questions about the legitimacy of the election — conveniently ignoring any role the president and prominent Republicans played in sowing doubt by peddling conspiracy theories that have been widely debunked.

The night before the Georgia Senate runoffs, within a minute of one another on Twitter, both Republican candidates announced their opposition to certification. Republican Sen. Kelly Loeffler declared that she would vote against certification as her colleague Sen. David Perdue tweeted out a clip from an interview where he says, “I agree that I would [object]” and urges his colleagues in the Senate to join the effort. Both Loeffler and Perdue have since lost their races — perhaps prompting Lankford’s reversal.

As Cameron Peters explained for Vox, far from the whole GOP conference is on board with Hawley, Cruz, and the other senators’ plans to object to what is normally a perfunctory procedure.

Still, 14 Republican senators — about a quarter of the conference — isn’t nothing. The current roster of 13 objecting senators is:

In the House, more than 100 Republican members have announced their intention to object on January 6. While concerning, these numbers do not come close to the level necessary to actually reject the Electoral College vote.

Vox’s Andrew Prokop has more on the procedural details of what will happen Wednesday, but briefly: Vice President Mike Pence will begin the process of counting the Electoral College votes, at which point if even one House member and one senator object, both chambers have to vote. As Prokop explains, “for the objection to succeed both the House and the Senate must vote in favor of it.” At the end of the day, there aren’t enough Republicans to actually reject the Electoral College’s votes, but it’s an opportunity for potential 2024 hopefuls like Pence, Hawley, and Cruz to jockey for the limelight.

Sen. Tom Cotton (R-AR), another potential 2024 candidate, has objected to this latest attempt to nullify the results of the presidential election. This dividing line is likely to play a role in the 2024 Republican presidential primary as candidates situate themselves along the Trump axis that has realigned the party.

Cotton isn’t the only Republican senator opposing this effort. Previous reporting has indicated that Senate Majority Leader Mitch McConnell and Senate Majority Whip John Thune are both opposed to splintering the Republican caucus in a vote that will be seen as either defying Trump or fully rejecting the legitimacy of the election. As Cameron Peters wrote for Vox, Sens. Lisa Murkowski, Mitt Romney, and outgoing Sen. Pat Toomey all released fierce statements “pushing back against the doomed — but alarmingly undemocratic — scheme to reject the Biden electors.”

According to CBS News, the full list of Republican senators supporting certification is:

Toomey’s statement castigated the objecting senators: “A fundamental, defining feature of a democratic republic is the right of people to elect their own leaders. The effort by Senators Hawley, Cruz and others to overturn the results of the 2020 presidential election … directly undermines this right.”

He goes on to reject the specious reasoning offered up by the offending senators, arguing that “allegations of fraud by a losing campaign cannot justify overturning an election.”

Hawley fired back at Toomey in an email to his colleagues telling the senior member to “avoid putting words in each other’s mouths” and wrote that instead of debating the issue by press release, “perhaps we could have a debate on the Senate floor.” Notably, Hawley was the first to issue a press release on the subject.

In a Monday tweet, President Donald Trump deemed the group supporting certification the “Surrender Caucus,” claiming they will “go down in infamy as weak and ineffective.” Trump also specifically called out Cotton, warning him that “Republicans have pluses & minuses, but one thing is sure, THEY NEVER FORGET!”

It’s a clear shot across the bow to any other 2024 hopefuls considering speaking out in favor of certification. The message is clear: If a longtime Trump ally like Cotton can be dropped so easily, so can anyone else.

Tech workers have been reluctant to unionize but Google contractors may change that
Joe Biden wins Oklahoma, another notch on his belt
The allegation that Mike Bloomberg told a pregnant employee to “kill it,” explained
The radical Texas lawsuit seeking to disenfranchise 127,000 voters, explained
“No ghettos in 2030”: Denmark’s controversial plan to get rid of immigrant neighborhoods
Facebook and Twitter suspend Trump’s accounts