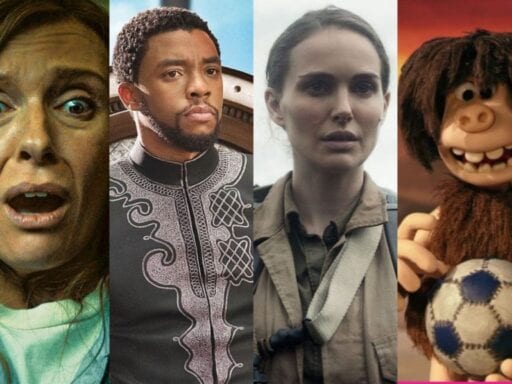 How to watch them, and why you should.

2018 is half over. And while most of the films that are hoping to garner year-end awards and accolades won’t come out for a few more months, this year has already seen a number of terrific movies, including a couple of horror films, a biting political satire, a few harrowing dramas, a boundary-breaking superhero film, and several movies about young men and horses.

Not all of the movies played in theaters; not all of them are to everyone’s taste. It’s a highly eclectic list. But they’re all surprising and refreshingly original — a bumper crop of talent and innovation.

What makes it great: From Aardman Animations — the folks that brought us Chicken Run and the Wallace and Gromit series — comes Early Man, a story of cave people and, perhaps unexpectedly, football. A quintessentially Aardman-esque stew of slapstick, homage, and wordplay so wry it barely (but always) misses being groan-worthy, Early Man is a gentle and modest reflection on how we have, from the very beginning, always needed to treat one another with kindness in order to survive.

How to watch it: Early Man is available on Blu-Ray and DVD, and for digital purchase on iTunes, Amazon, Vudu, YouTube, and Google Play.

What makes it great: An uncomfortably real story about a mother on the verge of a nervous breakdown, Tully is a poignant, sometimes painful story about a woman who reaches her breaking point. Charlize Theron and Mackenzie Davis turn in finely tuned performances that have an extra layer of meaning once you catch onto what the film is really about. It’s funny. It’s uncomfortable. And it feels real and lived-in, right to the bone.

How to watch it: Tully is playing in select theaters.

What makes it great: The surprise box office hit of the year so far is a horror film about parenting, with just enough jump scares to make it properly frightening mixed with tender moments and post-apocalyptic drama. Writer and director John Krasinski stars alongside his real-life wife Emily Blunt as parents trying to protect their children in a world overrun with creatures who have hypersensitive hearing.

How to watch it: A Quiet Place is playing in select theaters.

What makes it great: Black Panther was a hit for a reason: With a stellar cast and a story that’s a groundbreaking celebration of black culture, it delighted audiences and felt like a game-changer for Marvel. As Tre Johnson wrote for Vox, “It acknowledges and celebrates everything from traditional African society to African-American political debates, from the power and beauty of black women to the preservation of identity, all within the lush confines of the fictional African nation of Wakanda.” And that’s quite an accomplishment — especially for a superhero blockbuster.

How to watch it: Black Panther is, incredibly, still playing in select theaters. It’s also available on Blu-Ray and DVD, and for digital purchase on iTunes, Amazon, Vudu, YouTube, and Google Play.

11) You Were Never Really Here

What makes it great: You Were Never Really Here is about a tortured hitman named Joe, played with typical lacerating mastery by Joaquin Phoenix, who finds himself hunting for a teenage girl who’s gone missing. It plays out like noir, with Joe uncovering brutal corruption along the way. Director Lynne Ramsay uses an expressionistic approach to put us deep into Joe’s state of mind, and the result is ferocious and unforgettable.

How to watch it: You Were Never Really Here is playing in select cities.

What makes it great: Hereditary is the kind of horror film you don’t expect — an arthouse movie that’s about a family dealing with enormous, grotesque grief, until suddenly it’s about something else. The film features a dynamite performance from Toni Collette and a score laced with dread. Its inventiveness has divided some audiences, but one thing is for sure: It’s hard to get rid of it once you’ve seen it.

How to watch it: Hereditary is playing in theaters.

9) The Death of Stalin

What makes it great: The Death of Stalin, from Veep creator Armando Iannucci, tamps down the unrelenting joke delivery of Iannucci’s earlier work (like 2009’s In The Loop) in favor of a more complex, almost nihilistic rendering of what politics is: a team of bumbling and weak-minded people who lack any real conviction other than a desire for power and position.

The film (which is entirely in English, no accents) is based on the true events following the Soviet leader’s death and scuffle over his succession, and most of its comedy is situational rather than textual, which is to say that it’s funny because it’s true. Once you’ve climbed the ladder to kiss the ring of power, you can’t go back — but you’ve placed a big target squarely on your forehead.

How to watch it: The Death of Stalin is available on Blu-Ray and DVD, and for digital purchase on iTunes, Amazon, Vudu, YouTube, and Google Play.

8) Won’t You Be My Neighbor

What makes it great: The main goal of Won’t You Be My Neighbor is to convince us that even though kindness and empathy are in short supply today, it need not be that way. Through interviews with Fred Rogers’s close collaborators and friends, archival footage (some of it rare), and interstitial animated segments, the film builds out a portrait of a man who saw in the new technology of television an opportunity to communicate with a generation of children and tell them that they were special just the way they were. You’ll probably cry, but you’ll be so glad you saw it anyhow.

How to watch it: Won’t You Be My Neighbor is playing in theaters.

What makes it great: Jennifer Fox is best known as a documentarian, but for The Tale — which she called “pure memoir” in a Q&A following the film’s Sundance premiere — she shifts to a scripted format, transforming her own harrowing story of being molested as a 13-year-old into a sensitive, innovative, even beautiful feature that cuts right at the heart of the most difficult conversations we’re having as a country.

Laura Dern plays the grown-up version of Fox as she’s slowly forced to grapple with the fact that the relationship she once had with her 40-year-old swim coach wasn’t a relationship between two consenting adults, and struggles to find her place in her own story — is she a victim? A survivor? A heroine? The Tale is not a film that wears its importance on its sleeve, because it’s deeply personal. But it feels prescient, almost prophetic.

How to watch it: The Tale is only available to stream from HBO.

What makes it great: Loveless is a Russian film about a couple who are in the midst of a divorce when their young son disappears — something they barely notice, so preoccupied are they with their own lives and misery. The ensuing search doesn’t exactly pull them together, either. It’s about the couple, but it’s also about Russian bureaucracy and the police force. Loveless is not uplifting — but it is haunting.

How to watch it: Loveless is available on Blu-Ray and DVD, and for digital purchase on iTunes, Amazon, Vudu, YouTube, and Google Play.

What makes it great: Ben Foster stars as a father with PTSD after serving in the military who is raising his teenage daughter off the grid in a state park — until they’re found. Written and directed by Debra Granik (Winter’s Bone), it’s an often-surprising and very moving film about familial love, as well as the networks of support and empathy that people living on the margins construct for themselves. Small and soulful, Leave No Trace is a knockout.

How to watch it: Leave No Trace will open in theaters on June 29.

What makes it great: In Lean on Pete, a young man who’s been all but abandoned by those who are supposed to care for him sets off on a journey across the American West with a horse he’s grown fond of. The people he encounters along the way make up the story, but its main subject is whether it is good to be lonely or better to love people (or horses), even if they might hurt you or leave you in the end. This all plays out against an expansive backdrop of plains and barren landscapes, and it’s beautifully heartbreaking.

How to watch it: Lean on Pete is playing in select theaters.

What makes it great: The Rider is about a young man living on South Dakota’s Pine Ridge Indian Reservation who lives for the rodeo, until a serious injury sidelines him. The film chronicles his return and the danger in which he and his friends place themselves, in a community where horses are all that matter. It’s a constantly surprising look at masculinity. And the main cast comprises non-actors, including the star, Brady Jandreau, who is playing a version of himself, recovering from real-life injuries as his character does on screen.

How to watch it: The Rider is still playing in select cities.

What makes it great: Annihilation is a stunning follow-up to Ex Machina for director Alex Garland, who tells a story of a team of female scientists venturing into an unexplainable phenomenon known only as “the Shimmer.” But it’s about a lot more than that, too — love, loss, desire, and self-destruction — and as the film draws on imagery borrowed from Andrei Tarkovsky’s Stalker, it circles the suggestion that what we all want most is to lose ourselves completely. We crave our own obliteration.

How to watch it: Annihilation is available on Blu-Ray and DVD, and for digital purchase on iTunes, Amazon, Vudu, YouTube, and Google Play.

What makes it great: First Reformed is an astonishing, bruising meditation on faith and doubt from writer and director Paul Schrader (Taxi Driver, American Gigolo), starring Ethan Hawke in one of his greatest performances. Furious and darkly funny, it’s a tight, explosive encapsulation of our very specific moment in history, and one that brings both the physical and metaphysical into the picture as it considers what could be the future. And it dares to wonder aloud whether we’ll be forgiven for ushering it in.

How to watch it: First Reformed is currently in movie theaters.