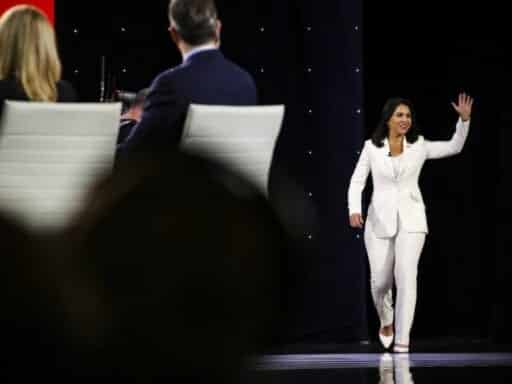 They would withdraw all US troops from Afghanistan within their first year in office.

The only two veterans on the Democratic debate stage this week were also the only two to commit to withdrawing all US troops from Afghanistan within their first year as president if elected.

On Tuesday night, Pete Buttigieg — the South Bend, Indiana, mayor who served as a naval intelligence officer in Afghanistan — vowed to bring all American service members home from that country during his first year in office after being pressed by CNN’s Jake Tapper.

And on Wednesday, Rep. Tulsi Gabbard (D-HI), who deployed to Iraq twice, made that commitment without extra prompting from the moderators.

“The leadership I will bring to do the right thing to bring our troops home within the first year in office,” she said. “Because they shouldn’t have been there this long.”

It’s striking that the Democratic politicians who served in the military are the most eager to end America’s nearly 20-year war in Afghanistan. More than anyone else on that stage, Buttigieg and Gabbard know firsthand the hardships of fighting in the Central Asian country and the challenges of winning the war there.

Their views are in line with 58 percent of veterans who told the Pew Research Center this month that the Afghanistan war wasn’t worth fighting.

They all seemingly share the same sentiment with President Donald Trump, who has put immense pressure on his team to bring back the roughly 14,000 American troops there as soon as possible. His administration is currently in diplomatic negotiations with the Taliban, the hardline Islamist group that used to run the country, to make a deal that would allow the US to exit the war.

Both Buttigieg and Gabbard are currently long-shots to win the Democratic nomination, though, so it’s unlikely they’d get the chance to fulfill their promise. Which means it’s potentially up to leading Democratic candidates — like former Vice President Joe Biden — who have yet to make that same commitment to draw down the Afghanistan war.

Why you’re unlikely to get the coronavirus from runners or cyclists
Iowa unveils its new election security feature: pieces of paper
The two-party system is killing our democracy
Why the next president should establish a Department of Climate
Federal judge blocks a Texas order limiting ballot drop-off locations
The Senate GOP’s leverage on the coronavirus bill is shrinking